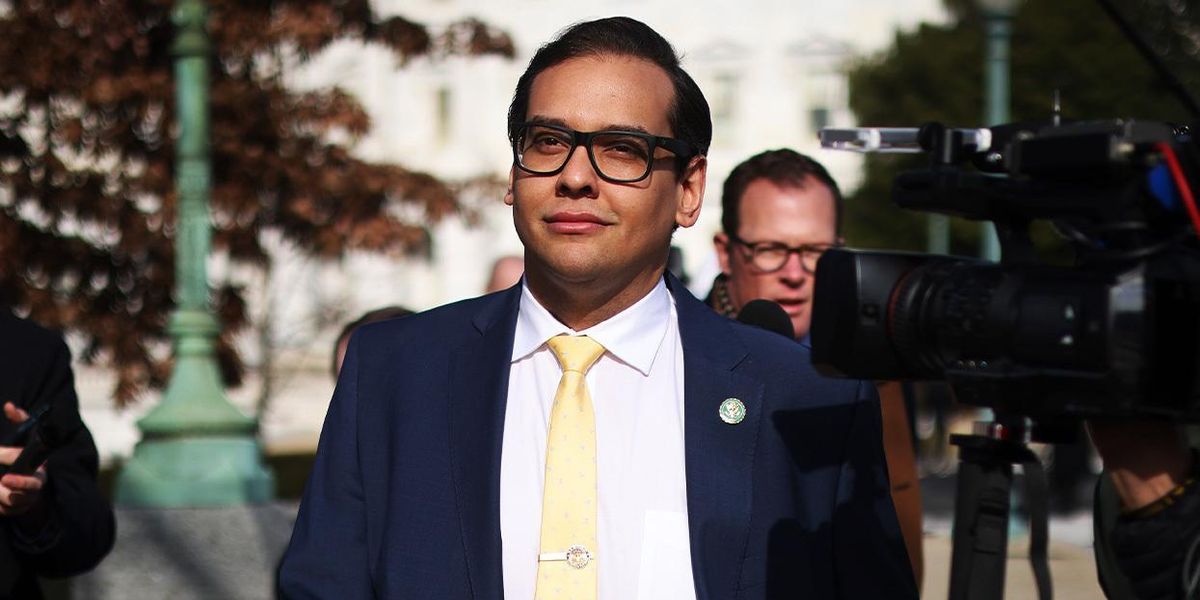 After another week of remarkable revelations about him, gay GOP New York Rep. George Santos will return to Capitol Hill next week when Congress returns to session, but his future remains unclear.

Now a resurfaced video from 2020 has people wondering (again) whether he’s actually gay or just opportunistic.

During a September 2020 appearance on a far-right influencer’s podcast, Santos, who is married to a man and says he is gay, railed against LGBTQ+ families and single-parent households.

“The family unit has been under attack for decades, decades!” Santos said on Indivisible, a right-wing podcast hosted by John Stubbins.

“In 2020, George Santos called “same-sex couples” an “attack” on “the family,” and said schools “make excuses” by teaching kids “it’s ok” to have single or gay parents. Santos: “They’re teaching …you can have 2 mommies have 2 daddies. I think that’s a little much for kids,” the group tweeted.

u201cIn 2020, George Santos called “same-sex couples” an “attack” on “the family,” and said schools u201cmake excusesu201d by teaching kids “it’s oku201d to have single or gay parents.nnSantos: “They’re teaching …you can have 2 mommies have 2 daddies. I think that’s a little much for kids.u201du201d

Santos continued, “The flavor of the decade is same-sex couples. ‘Oh, that’s so ok!’ Look, to each their own, I don’t have anything against that, but they’re teaching in school how kids that, you know, you don’t need a mommy and a daddy, you can have two mommies, you can have two daddies. I think that’s a little much for kids, right?”

Recently, Republicans have cast themselves in the role of protector of all children, who, according to their conspiracy theories, are under attack by a cabal of leftist drag queens and transgender people pushing an LGBTQ+ agenda to take advantage of children sexually and turn them trans.

“That’s an attack on the family unit in the sense where they’re just making excuses and reasoning to explain to kids why there’s only one mommy or why there’s only daddy and no other person, that it’s ok to be like that, that that’s your unique family,” he said.

The video is the latest in what seems like a never-ending series of controversies.

Earlier this week, photos and video surfaced of Santos allegedly dressed in drag as drag queen Kitara Ravache. On Wednesday, a freelance reporter and MSNBC columnist, Marisa Kabas, broke the news of the GOPer’s affinity for drag, with photographic evidence to go with the story that included an interview with a Brazilian drag queen who knows Santos.

In addition, multiple media organizations reported speaking with people in Brazil who knew Santos at the time and were aware of his interest in drag.

It’s not the drag that is an issue for critics, it’s what they’ve called his hypocrisy on LGBTQ+ matters that makes the development newsworthy, rather than his history of dressing in drag.

In addition to the comments in the video, Santos has expressed support for Florida’s “don’t say gay” law and has called members of the LGBTQ+ community “groomers,” a false slur used by the right to paint queer people as child sexual abusers.

While the Republican lawmaker — the first out non-incumbent gay member of the GOP to be elected to Congress — essentially ignored all of the newest allegations against him, he did react to the drag queen revelation.

“The most recent obsession from the media claiming that I am a drag Queen or “performed” as a drag Queen is categorically false. The media continues to make outrageous claims about my life while I am working to deliver results,” he objected.

u201cThe most recent obsession from the media claiming that I am a drag Queen or u201cperformedu201d as a drag Queen is categorically false.nnThe media continues to make outrageous claims about my life while I am working to deliver results.nnI will not be distracted nor fazed by this.u201d

“I will not be distracted nor fazed by this,” he added.

About four hours later, he tweeted again, this time about allegations that he was responsible for the death of a homeless veteran’s beloved dog.

“The reports that I would let a dog die is shocking & insane. My work in animal advocacy was the labor of love & hard work. Over the past 24hr I have received pictures of dogs I helped rescue throughout the years along with supportive messages,” he wrote.

Again he remained defiant, writing, “These distractions won’t stop me!”

The second tweet stems from another revelation this week that Santos allegedly stole money from a GoFundMe campaign he set up as part of his stewardship of an animal-support group.

The local news network Patch first reported the allegations, citing Richard Osthoff, a disabled U.S. Navy veteran who lived in New Jersey with his pitbull mix Sapphire in 2016. The dog required surgery to remove a tumor in its abdomen, and Osthoff needed funds for the procedure.

Under the name Anthony Devolder — one of several aliases traced to Santos — he arranged to set up a fundraising page through his Friends of Pets United organization. However, no records of such a company exist.

When the fundraiser reached its $3,000 goal, Santos allegedly told Osthoff to take Sapphire to a veterinarian in Queens, who declined to operate on her. When Osthoff asked Santos for the money, he eventually told him he had moved it into his charity to use for other dogs, Patch reported.

During Sapphire’s last days in January 2017, Osthoff said he had to panhandle to pay for her end-of-life care.

Santos has also been proven to have lied about another part of his biography.

He had made the bizarre claim that he lost his mother due to the terror attacks on September 11, 2001. He claimed she was “at her desk” on 9/11 in the World Trade Center. According to him, she later died of cancer from exposure to toxins at ground zero.

NBC News reports that this is a lie. According to records reviewed by the network, Santos’s mother left the U.S. in 1999 for Brazil and did not return until 2003, two years after the attack.

Other than the tweets denying his involvement in drag and Saphire’s death, Santos has not addressed any of the latest alleged falsehoods uncovered by reporters daily.

A spokesperson for the congressman confirmed the situation to an NBC reporter. The account was restored by mid-afternoon Friday. His main account, Santos4Congress, was untouched.

Although state and local members of the GOP and some fellow members of Congress have called on Santos to resign, he has resisted those calls and remained defiant, indicating several times last week that he would stay put.

Speaker of the House Kevin McCarthy expressed his support for Santos and rejected asking him to resign. Santos has proven himself to be a loyal vote for the California lawmaker. McCarthy’s power control hinges on a slim majority in the House of Representatives.