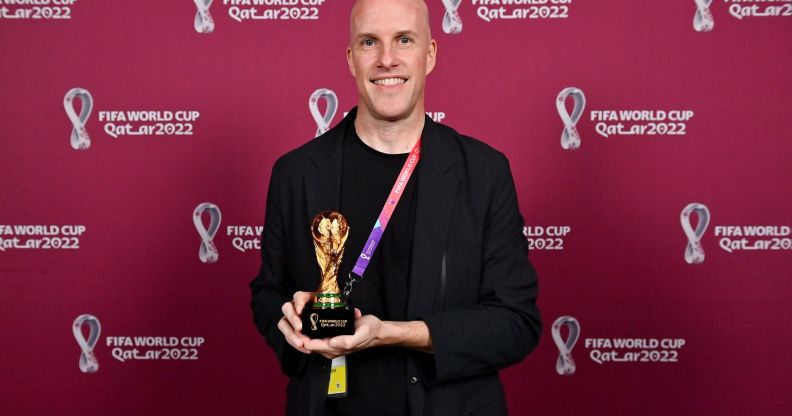 The wife of US sports journalist Grant Wahl has shared a touching tribute following his sudden death while covering a match at the World Cup in Qatar.

Céline Gounder thanked people from around the globe for their “support, love and sympathy”, following her late husband’s passing.

Gounder confirmed in her Substack post that an autopsy performed by the New York City Medical Examiner’s Office showed Wahl died of an undetected ascending aortic aneurysm with hemopericardium.

“The chest pressure he experienced shortly before his death may have represented the initial symptoms,” she wrote.

Wahl’s brother Eric had suggested his sibling “was killed”.

In an emotional clip posted on Instagram he said he believed Grant was healthy and that, while reporting on the World Cup, he had “received death threats”.

“I do not believe my brother just died,” Eric said. “I believe he was killed, and I just beg for any help.”

In the post Gounder expressed that it is a “very difficult and painful time”, as the family of Grant Wahl “grieve a beloved husband, brother, and friend”.

She noted that some comfort has been found in knowing the many people her husband touched are also grieving alongside them.

Gounder said his body arrived home on 12 December and this “transition was handled with the utmost care and sensitivity”.

She then highlighted how he was known by his loved ones: “While the world knew Grant as a great journalist, we knew him as a man who approached the world with openness and love.

“Grant was an incredibly empathetic, dedicated, and loving husband, brother, uncle, and son who was our greatest teammate and fan.

“We will forever cherish the gift of his life; to share his company was our greatest love and source of joy.”

Gounder then highlighted his impressive career, which started in 1996 at Sports Illustrated after he came out of Princeton University.

During this role, where he worked as a features writer, he published renowned work such as his cover story on LeBron James at age 16, his account of the US Women’s World Cup win in 1999, and his story of one soccer family’s loss and legacy.

It was in 2009 that Gounder began covering football exclusively, and went on to become a New York Times bestseller with The Beckham Experiment, and in 2012 began working independently.

“Grant had a deep respect and appreciation for his audience. He devoted his work life to earning their –your – time and respect in turn,” Gounder added.

“Above all, he expressed his values through his work: his commitments to seeking truth through reporting, supporting fundamental human rights, and fighting for equality.

She recalled her husband “radiated pride” about his professional work, but said their lives together were a lot more than just their work.

“What drew us together were shared values.

“Shaped by strong women like his mother Helen and the late New York Times war correspondent Gloria Emerson, Grant was a feminist, by which I mean a staunch advocate for equality, and not just on the basis of sex.”

Gounder expressed admiration for how present Wahl was for family and friends.

She said he and his brother Eric “were the ballast” to their family after her “father passed away suddenly, just as I coordinated the care for Grant’s parents in their last years of life”.

A memorial service is being arranged and details will be shared soon.