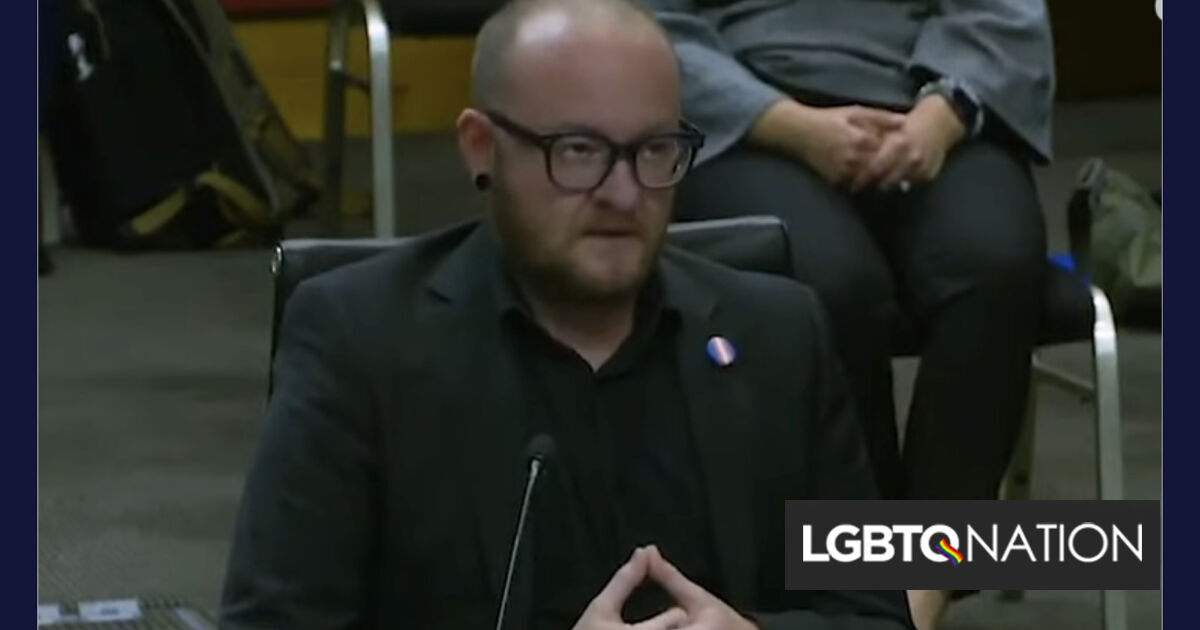 A proposal by a far-right politician in Australia seeks to ban anything that would “promote” so-called “gender fluidity” or “sexuality” in education. It is currently under consideration by the New South Wales government, and during hearings for the bill, several anti-trans “experts” testified. But an actual expert on the health and education of trans people did also.

Teddy Cook is a health educator and leading advocate for trans people and trans equity in health with “over 15 years of experience in community health and non-government sectors.” Oh, and he is also an actual trans person.

Related: Parents held two separate funerals for trans teen because his father wanted to deadname him

The proposal, which is an amendment to the territory’s existing education laws, seeks “to prohibit the teaching of the ideology of gender fluidity to children in schools,” defining “gender fluidity” as “a belief there is a difference between biological sex… and human gender.” If passed, that could outlaw mention, acceptance, or even acknowledgement that a student can be a gender different from their gender assigned at birth, or that gender and sex are different.

It also seeks “to clarify” that parents are responsible for a child’s “understanding of [their] personal identity, including in relation to gender and sexuality,” not a school. The legal definition of each governing body in education would be prohibited from going against a parent’s desires gender norms, and acknowledgement of anything other than heterosexuality may not be allowed.

The proposal was introduced by Mark Latham, a member of Parliament’s upper house, the Legislative Council. The Council held two days of hearings, overseen by Latham, on the proposal.

Enter Cook, who is currently the acting director of Community Health & Regional Services at the AIDS Council of New South Wales (ACON), the Vice President of the Australian Professional Association for Trans Health (AusPATH), and an adjunct lecturer at the Kirby Institute, the government-funded medical association at the University of New South Wales.

ACON denotes him as someone who “specialises in community development, health promotion and program delivery” and “a proud man of trans experience.”

Cook’s testimony had to contrast that of several anti-trans advocates, including representatives of anti-LGBTQ groups like the Australian Christian Lobby and Save Women’s Sport Australasia, and Catholic schools in New South Wales. The actual Catholic diocese for the territory was denied an appearance, and the Catholic Church is divided over the topic of supporting the bill.

Cook opened his testimony with a powerful opening statement. “I am also really grateful for the opportunity to speak as an adult who was once a trans child,” he told those at the hearing. “It is often the case that people who are most affected often are given the least opportunities to speak, and even if my voice shakes, that is OK because I am still here.”

“Whatever the outcome of this inquiry is, we know that we’ve always been here, we have always been in education settings, and we always will. And it’s important that we know we are valid and that we offer the world an incredible gift,” Cook said.

“One thing is for certain though: We deserve the dignity of being known. The research globally, here and internationally, continues to show up the same results: that trans kids do better and they have a better quality of life when they are affirmed as who they are at school.”

He then provided data showing that trans youth are better performing students when they’re in a trans affirming environment, as opposed to when they are not. “They do better. They just do better,” Cook said.

He then told the Council members, “I have got to say, in many ways, I really wish the trans community was as big as members of this committee seem to think that we are. You do seem to see us as a threat, which is interesting. I do hope that you know some actual trans people in your life. I hope that I am not the first one you have met.”

“The reality, though, is that we are not powerful enough to disrupt the culture of this country. Many of us, even though we are incredibly resilient, are just trying to get through the day, really, we are not the threat you imagine us to be… even as we come together to protest in this very room earlier today,” Cook stated.

He explained that trans people alone don’t have the strength to combat, and overtake, a society that currently ostracizes them. Most are too preoccupied fighting to survive.

“With the suicide attempt rates of my community, particularly in younger people, being so high, this bill will do one thing: increase risk to harm for people like me.”

He then broke down why Latham’s proposal to outlaw “gender fluidity” is only going to cause drastic harm, and the council’s failure to even understand the difference between genderfluid people and trans people.

“The reality, really, is that we’re not gender fluid. And I’ve heard in the last session, people querying about what gender fluidity even means, and I’m sorry to tell you, I don’t think you spoke to any trans people when you were thinking about that definition.”

He then notes that many trans people in the New South Wales community are indigenous people.

“The reality is that trans people have always existed. We have always been here. We have place and culture and ceremony in First Nations populations across the globe. For people to talk about us like we are a Western, modern construct is a lie. It is just not true.”

Afterwards, Cook took questions from the council. Even Latham offered Cook support during his testimony.

“I will say first up: I hate talking about myself,” Cook prefaced the inquiry. “… my life story is much more interesting in many other ways aside from my gender because I am just a man … It is just so dull.”

Teddy Cook was the only trans person to appear at the inquiry into Latham’s NSW anti-trans bill, and he was incredible. Please watch! 💜🏳️‍⚧️https://t.co/rCc1PfmPcm

“It is often the case people who are most affected are given the least opportunities to speak. We deserve the dignity of being known. We aren’t the threat you imagine us to be.”

Imagine the pressure on Teddy Cook as the only trans person speaking. Then let his speech change you. https://t.co/z0CDFszclr

Teddy Cook in the Latham inquiry: I think I’m the only trans person here, actually being told that who I am is a threat or a challenge or a radical theory or problem. And here I am in a suit in front of you… I do have a number of tattoos but I’m really not very radical at all.

After testifying, Cook told the Guardian that he has received messages thanking him for standing up for trans people.

Clips from his testimony, which was broadcast online, were shared widely on social media.

“I got one message saying, ‘Thank you so much for a voice for our kids,’ and stories – particularly from parents – telling me what it meant for their young person to see an adult trans person speaking so strongly,” Cook said. “I have had a lot of messages from clinicians as well, they have been really lovely.”

‘We deserve the dignity of being known’.CN: mentions of suicide in the trans communityTeddy Cook was the only trans person invited to speak on Mark Latham’s anti-trans bill in NSW Parliament. A bill which would erase trans & gender-diverse students, and would see any school staff who support them fired from their jobs. Teddy NAILED IT! He faced the challenge with humanity, purpose and a whole lot of evidence. Please watch every minute and share with everyone you know! :trans: 💜 :trans: 💜 :trans:____________________________________________If you are having a tough time and need support: QLife www.qlife.org.au 1800 184 527 3pm-midnight in your state (support & information for our communities) Lifeline www.lifeline.org.au 13 11 14 (24 hour) Suicide Callback Service www.suicidecallbackservice.org.au 1300 659 467 (24 hour)