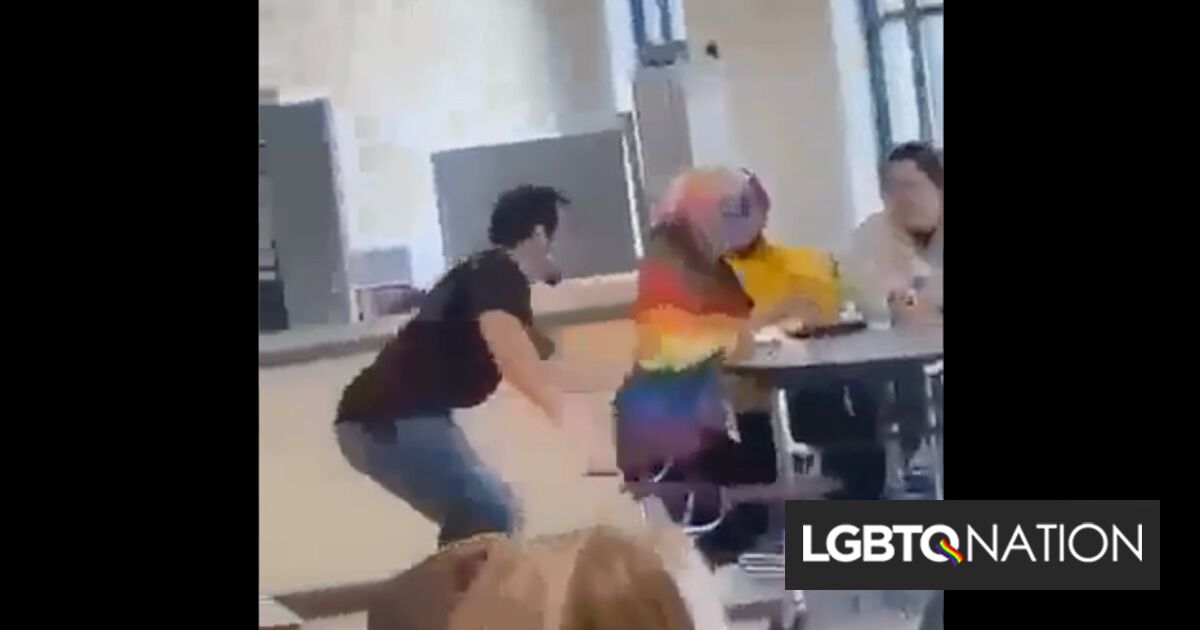 Video of a student wrapped in a rainbow Pride flag getting assaulted at a Georgia high school has gone viral after being posted by a graduate. The attack was reportedly prompted to satisfy a $5 dare.

The short video shows another juevenile rushing up to the student, grabbing the flag, and pulling them out of their seat at a lunch table. The attacker drags the student across the floor as another young person tries to intervene.

The attacker eventually rips the flag away and angrily throws it into a trash can before accosting the other student before the video ends abruptly.

Another female student who can be seen in the foreground of the video smiles and laughs as she turns away while the rainbow-wrapped teen gets assaulted.

“i need everyone to see the scum thats here in South Ga,” Twitter user José tweeted. “this just happened today at Lowndes High School, the high school i went to and my brother is currently going to, here in Valdosta”

“this is a fucking hate crime and i’m so fucking LIVID that girl at the table was smiling and laughing at this kid getting assaulted.”

In a later update, José clarified, “The assaulter’s name is Andrew Hunter and he was apparently dared to do it for $5. He was arrested and charged by the police and the school/county has yet put out a statement on what happened”

“We are aware of a social media video involving two students and a Pride flag,” Rodney Green, Lowndes High School assistant principal, said in a statement released after José’s tweet. “We take the well-being and safety of our students seriously. Our staff works hard to provide a safe environment where all of our students feel valued.”

“As soon as the Lowndes High School administration was aware, the matter was investigated, they ensured that the victim was not hurt and addressed the other student following the appropriate consequence outlined in the Student Code of Conduct.”

The attacking student has been charged with disorderly conduct, simple battery and disruption of a public facility.

Also: there are plenty of people (like the person who recorded the video) who are defending the assaulter’s actions so we gotta be loud and vocal to make sure these homophobes don’t ever think it’s cool to do something like this