Unhinged GOP lawmaker arrested after trying to be a substitute teacher. He terrified the students. 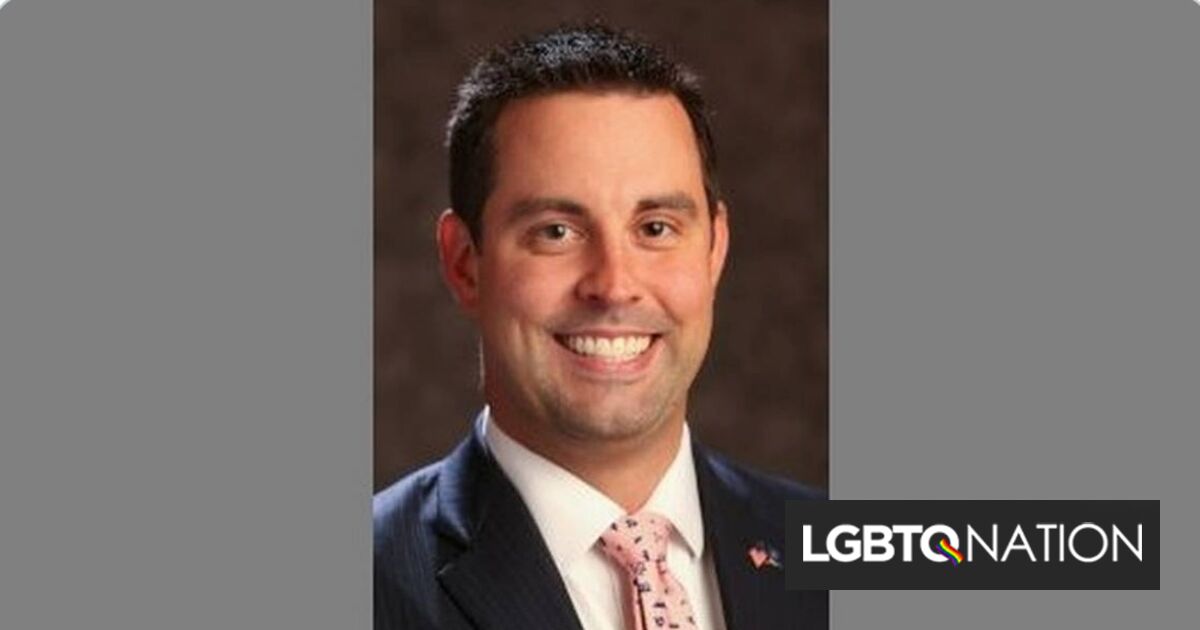 That was all before he allegedly grabbed one student and pushed him against the wall, and attacked another by invoking the “wrath of God,” intentionally hit him in his genitals, then invited others in the class to do it too. He has since admitted that he planned his actions but claimed that he did nothing wrong.

The day of mayhem took place at Wellsville High School, a school of about 225 in Wellsville, Kansas, on April 28. Wellsville is the area that Samsel, an attorney by trade, has represented since 2019.

Samsel started by ranting against LGBTQ parents, claiming that he knew an unnamed sophomore at the school “who’s tried killing himself three times,” because “he has two parents and they’re both females.”

“He’s a foster kid. His alternatives in life were having no parents or foster care parents who are gay. How do you think I’m going to feel if he commits suicide? Awful,” Samsel lectured to a classroom of students.

He then used the moment to try to force the children to commit to procreating.

He continued referencing suicide all day.

“I’m not going to lose one more of my kids to suicide. Are we clear?”

He later said that he repeated these “lessons” for each group of high schoolers that came to his classroom with each different period.

He asked one student, “are you doing the Lord’s work if you’re listening to the devil’s music?”

If Samsel had any control of himself, he eventually lost it. Footage reportedly showed that Samsel got into a back-and-forth with one student, facing off with the teen as they “paced around the classroom, talking back and forth.”

“You’re about ready to anger me and get the wrath of God. Do you believe me when I tell you that God has been speaking to me?”

He proceeded to push the student. The student ran away and tried to find refuge on the opposite side of the classroom.

“You should run and scream,” Samsel allegedly said.

The next video documenting the sequence of events reportedly showed the student on the floor. This is apparently right after Samsel used his knee to hit the student in the “crotch” area.

“Did it hurt?” Samsel asked the floored student. He then invited the class of students to join in. “Class, you have permission to kick him in the balls.”

The student begins grimacing and Samsel just tells him, “go to the nurse, she can check it for you.”

It, being his private areas. That is, unless another student wanted to, Samsel offered. “Do you want to check his nuts for him, please?” Samsel asked another student.

In another video, Samsel appeared to grab another student from behind while “explaining” to him the “distractions from the devil.” He lifts the student up by his shirt and elevated him off the ground.

“You were not following — not my rules — God’s rules right now… you better take a Bible,” he told the student. “Keep denying God, keep denying God, see how it’s going to turn out.”

He then reportedly directed the student to go outside, with another student, and told them to run around the high school’s track field while holding hands.

“Do you think we want to do this? No, we had a lesson to do. Is it kind of funny? Yeah. Are they ever going to learn? God only knows,” Samsel said of his treatment of the teenagers.

After spending the day harassing and assaulting students, Samsel expressed no regrets. He took to Snapchat, not only standing behind his actions, but confessing that they were premeditated.

“It was all planned,” he said. “Every little bit of it. That’s right. The kids and I planned ALL this to SEND A MESSAGE about art, mental health, teenage suicide, how we treat our educators and one another.”

“To who” was the “message” of allegedly assaulting a minor and harassing others intended for? “Parents, and grandparents, and all of Wellsville,” he said.

The mayhem was “exactly what God planned. The kids were in on it. Not all of them. But most,” he claimed.

Samsel was arrested and will face charges for assaulting the student. The district’s superintendent, without acknowledging that the substitute teacher was Samsel, pledged that he will never be hired again.

“Student safety has and always will be our first priority,” superintendent Ryan Bradbury claimed in a statement.

Samsel was booked into the Franklin County Adult Detention Center on April 29. He has since been released on $1,000 bond.

Samsel suggested he had no qualms with his charges because he gave at least one student “hope.”

“I went to jail for battery,” he shared with his followers. “Does that really make me a criminal? Time will tell.”

Samsel, in his second term, has not resigned nor has he been reprimanded by his peers.

“We’re not yet aware of the details and in the process of gathering as much information as we can,” Kansas House Speaker Ron Ryckman (R) said in a statement.

Parents, meanwhile, are dismayed and want to make sure that Samsel is not allowed near children again. He currently sits on the Kansas House Education Committee and serves as a basketball and soccer official in the statewide youth sports association.

The mayor of nearby Kansas City, Missouri, Quinton Lucas (D), asked simply, “What the hell is going on with the #KSLEG this session?”

What the hell is going on with the #KSLeg this session? He shouldn’t just be terminated from substituting. He should be blocked from being around all kids. https://t.co/WkWTBanx8h

Samsel is the second Kansas legislator to be arrested this year. State Sen. Gene Suellentrop (R) was arrested in March after driving while drunk and trying to evade police which led to a car chase. He’s since resigned as the Majority Leader of the state Senate, and many called for his impeachment, namely Samsel, although there are no procedures for impeachment in the Kansas Legislature.

He wanted Suellentrop removed to set an example for those “most important” to the chamber.

He further defended his actions in an interview outside of a diner, even demonstrating some of his behavior on one of the diner’s staff members. He did say that he “thinks of resigning every day,” though because “that place sucks. Topeka sucks.”

“If I didn’t say I was going to bring the ‘wrath of God’… everyone keeps their head down and keeps on going,” he claimed.

“‘Altercation’ is a strong word,” Samsel said. “There was no altercation. I’m sure there’s some – one or two students who probably perceived it as one, but it was exactly as we planned it.”