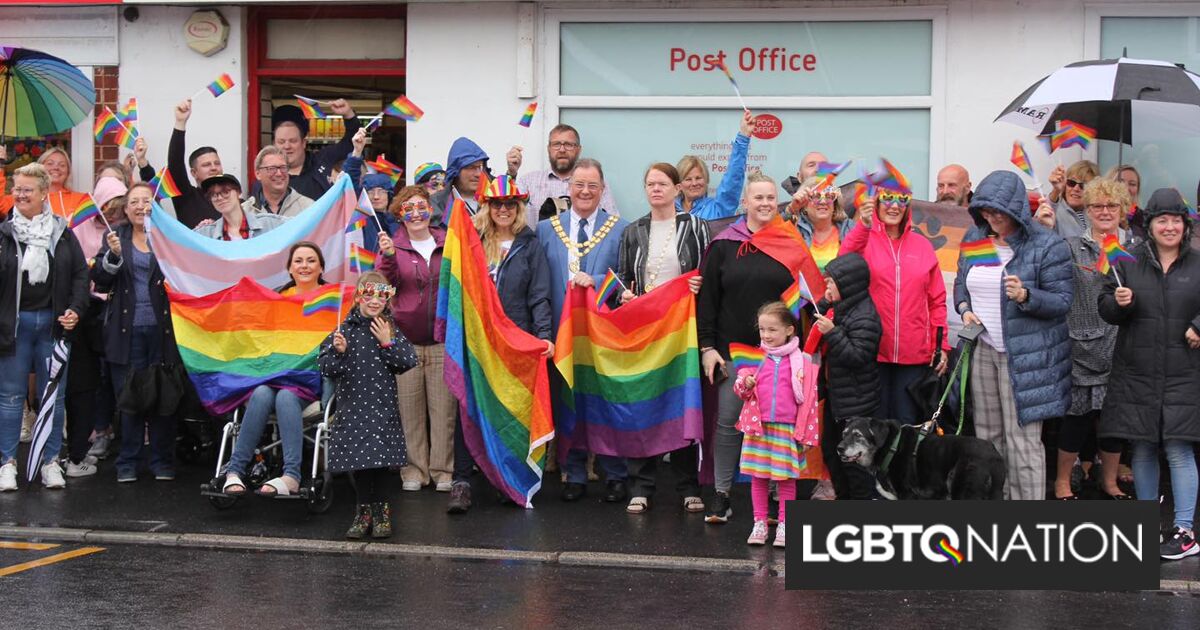 “Get that revolting flag down,” someone wrote to Nathan Jones and Daniel Cooper. “This is a Christian village and children pass by. What kind of morons are you?” Jones and Cooper received the message after hanging up a Pride flag at the post office that they run in New Longton, in the U.K.

But that didn’t stop their town from rallying behind them, showing that solidarity will always win out in the face of hateful abuse. On Tuesday, the townspeople held a rally outside the post office to show their support for the targeted couple.

“I knew I wanted to be involved in trying to rectify the hatred and blatant homophobia that had been aimed at Nathan and Daniel,” New Longton local Chris Wilson told PinkNews. Wilson is the one who organized the rally for Jones and Cooper.

“I’m not a political person, I’m not a religious person but I am a person who cares, I am a proud gay man, that will stand shoulder-to-shoulder with anyone regardless of sexuality, gender, race, or religion to show that love wins, love will always win,” Wilson continued.

The rally was a long time coming. The note Jones and Cooper received was just the latest in a long line of abuse the couple received. But the note regarding their Pride flag was the final act that got people involved.

“Nathan and Daniel have had a bit of abuse for a few different things, but this latest attack is just appalling. I couldn’t believe it and neither can lots of people who come into the shop,” said Kirsty Taylor, who works with Jones and Cooper.

Although the residents don’t know who keeps hurling the abuse at Jones and Cooper, it is clear that they won’t tolerate it any longer. And not even the rain could stop them from helping out their local post office and villagers. The entire town waved rainbow flags in their raincoats as they stood outside the post office making their voices be heard.

“Words can’t describe how we feel at the kindness everyone has shown,” Cooper said when asked how he felt about the villagers showing up for them.

It just goes to show that when a village comes together, everyone can feel protected by the ones who respect and love them for being just who they are.