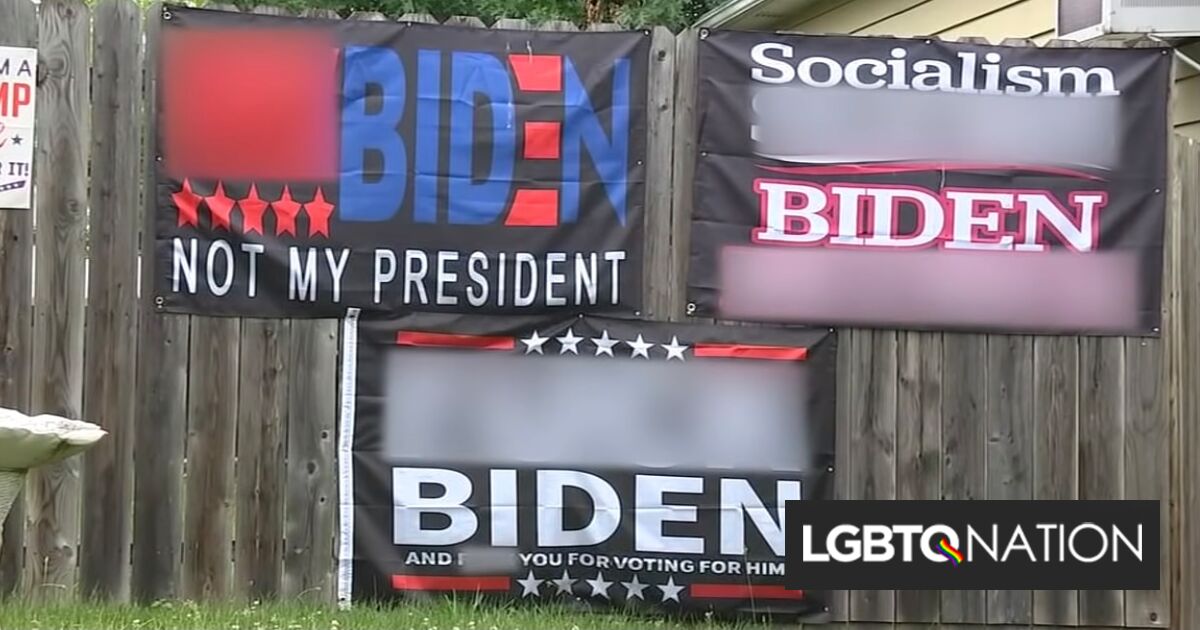 A New Jersey homeowner is facing condemnation from her neighborhood for displaying several signs and posters proudly supporting former President Donald Trump (R) and claiming that President Joe Biden (D) and socialism “sucks.” The signs use several curse words and one even includes an edited photo of Trump displaying two middle fingers.

“Fuck Biden, not my president,” “Fuck Biden and Fuck you for voting for him!” “Socialism sucks,” and “Biden blows” are just some of the phrases used in signs outside Andrea Dick’s home, which is within blocks of an elementary school in Roselle Park. She’s refusing to comply with a city request to take the profane displays down or face court-mandated fines.

Related: New video shows ungrateful bullies in tears after LGBTQ people save them from burning boat

“They want me to take the flags down by Monday which is not happening, I’m not doing it, I have a right to have those flags there,” Dick claimed to ABC7 New York. “Freedom of speech!”

“I’m done, and those flags are not coming down,” she said defiantly.

However, the town’s mayor, Joe Signorello, has explained that the reason she has to take down the signs is not because of the message she’s expressing, but because the explicit content violates the city’s code.

“Freedom of speech when it comes to politics obviously [is] totally in bounds. The issue comes when using profane sexual language especially near an elementary school. All we’re asking is for her to comply and take those down,” Signorello said. “She can put up all the pro-Trump signs she wants as long they’re not sexual and vulgar in nature.”

Signorello said that Dick’s had political signs on her home for two years, but his office only began fielding complaints in the last week with the new profane signs.

Roselle Park officials have sent an official warning to the Dick home requesting that they remove the signs. If they don’t by Monday, fines of up to $500 can be imposed on a daily basis.

Mayor Signorello expects the town to take Dick to court if she doesn’t take down the signs.

Many neighbors, however, expressed their outrage over the signs, which they believe are obscene, especially near a place where children are regularly walk by.

Dick claims that children rarely traverse past her house and that it’s just an excuse to limit her speech from people from the “other side of town.” Meanwhile, her home has become a tourist “attraction” for other pro-Trump fanatics.

“I am 100% a Trump supporter. I feel the election was stolen from him,” she explained.

She then claimed she doesn’t understand “why, why we’re not able to go to the polling and vote when we were able to wear a mask to go to the food store, to go to Target, to go to Walmart.”

According to her, “We were able to go shopping but we couldn’t go vote” last fall.

She further justified her signs by claiming that the mayor hosted a “drag queen bingo” for children recently at a library. But according to New Jersey 101.5, the event was for high schoolers and was hosted by library trustees, who are independent of the mayor in the city.

“There were no signs up for that so it wouldn’t have been a violation of the ordinance we’re talking about,” Signorello said.