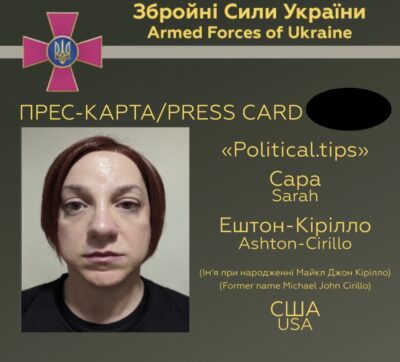 Sarah Ashton-Cirillo, a transgender war correspondent reporting from Ukraine for LGBTQ Nation, has formally enlisted in the Ukrainian Armed Forces.

Ashton-Cirillo, who arrived in the war-torn nation in early March, originally set out to report from Poland on the massive refugee crisis that engulfed Europe after Russia’s invasion in February. Days later, after joining a group of returning soldiers on a train with supplies bound for Kharkiv, Ashton-Cirillo was reporting from the front lines of the largest military conflict in Europe since World War II.

“That first night we took cover in the darkness, camouflaged against a sky offering a canopy of infinite blackness because it was simply too dangerous to traverse the city streets after curfew,” Ashton-Cirillo wrote in her first dispatch to LGBTQ Nation. “As soon as the light of morning peaked, we headed into the ravaged city, checkpoint after checkpoint lining the streets.”

Today I was enlisted in the Armed Forces of Ukraine.

To get on that life-changing train ride into Ukraine, Ashton-Cirillo had to confront her transgender status head-on and with her wig off.

“On a putrid-smelling and frigidly cold train car surrounded by five border guards and an interior ministry security official, I had two choices, take it off or be ejected from Ukraine,” she wrote in a story about traveling into the war zone. “Having already crossed from Poland onto Ukrainian soil, abandoning my coverage so quickly was a non-starter. I removed my wig. Four other media members witnessed this moment of intense humiliation and were also privy to the ensuing interrogation.

“And why did this take place? Because of gender, bureaucracy and the need to place professional duty ahead of personal tribulation.”

With a mix of observation, interviews, and striking photographs, Ashton-Cirillo reported dozens of stories for LGBTQ Nation from Ukraine’s myriad battlefronts, including the refugee crisis, war crimes against LGBTQ citizens, the personal toll of war on Ukraine’s citizens in hospitals, human rights groups and aid workers working in Ukraine, and Russian propaganda ops.

In her first story, she wrote: “Around 6 pm on my second evening, the group I’m embedded with decided to take cover for the evening in a restaurant, and the same on our third. Chairs, some blankets, a pillow, and contagious amounts of patriotic courage from my hosts have helped me find sleep during the explosive nights.

“Operating as a hub of activity for various security services, the restaurant is now the location where I work, eat, sleep, and digest the toll that the Russian invasion has taken on the population of Ukraine and the global community as a whole.”

The personal ran through Ashton-Cirillo’s reporting, as she made no secret of her disdain for Vladamir Putin and the war crimes he’s inflicted on the Ukrainian people. That made her a public target of criticism from right-wing media sympathetic to Russia’s invasion of a sovereign country.

“Basically, the Ukrainian government gave the transgender American a green light to report in the country since he’s pushing left-wing, pro-Ukraine talking points,” Alex Jones’ Info Wars wrote while misgendering her after Ashton-Cirillo announced joining the UAF. “Since then, Cirillo has been palling around with the neo-Nazi Azov batallion members.”

“My transition doesn’t define me,” Aston-Cirillo wrote in an early dispatch, “it is just an added aspect of who I happen to be. It is that mantra that allowed me to push forward, sidestep that initial moment of fear, and center on why I was more than 6,000 miles from home, attempting to report on a genocide taking place in a former Soviet state.

“In doing so, I was granted access to any area of the nation I chose to visit, including the battlefronts. I was also given the benefit of being able to ignore curfew restrictions, and I didn’t need to show my passport at every checkpoint. These permissions came with a unique, albeit official, nod to my circumstances.

“Ukraine understands a world where genders exist, where identity belongs to the individual, and proved this by going out of their way to make space for me as a transgender reporter.

“This episode clearly showed me firsthand why Putin is terrified of this incredibly strong, dynamic, and beautiful nation. This episode also shows why Ukraine has already won.”