Trans & queer New Yorkers faced brutal use of force by police near Stonewall. The mayor “doesn’t know anything.” 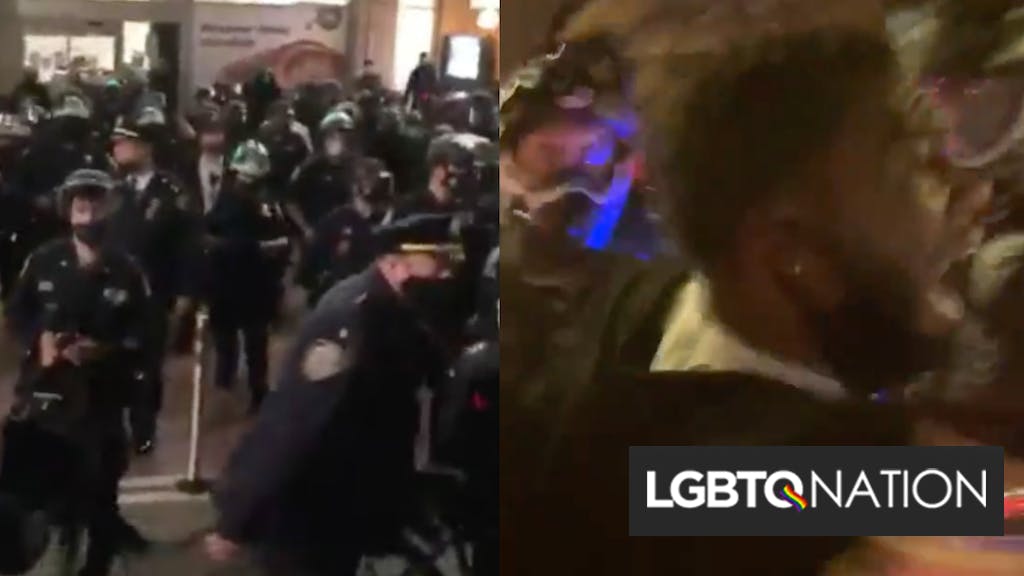 As many celebrate the election of a new President, the success of Democrats across the country, and the eventual end to Donald Trump’s administration, recent events in New York City serve as a reminder that many people, especially LGBTQ people of color, are still at risk for facing excessive force or brutality at the hands of law enforcement.

A rally and march from the site of the Stonewall National Monument became the catalyst for police to aggressively ambush people at the event, make arrests, and make a show of force in the same location where LGBTQ people made a stand for their rights over 51 years before.

Related: Plainclothes cops in an unmarked van abducted a trans teenager as she skateboarded down the street

A gathering organized by queer and trans people of color, dubbed “We Choose Freedom,” has been held in the Big Apple for the last five months. It starts at the Stonewall Inn and goes throughout Greenwich Village, the city’s most prominent gay village, before ending in Union Square or occasionally in Washington Square Park.

While referred to by most as a protest, and started in the wake of police murders escalating this summer and the violence LGBTQ people have faced throughout the year, “We Choose Freedom” events are usually peaceful, jubilant rallies described as reminiscent of a Pride march or holiday outing. “Several hundred people” look forward to the gathering, where they can “hear Black trans women sing and speak outside” Stonewall.

That is, until the event was held again on November 5. This time, the New York Police Department (NYPD) made several arrests and charged the crowd, using their bikes to forcefully push crowds of people together – without request, and during a pandemic – onto sidewalks near outdoor restaurants or homes in the neighborhoods.

Seen at the very front, trying to reason with police officers, was the city’s own elected Public Advocate, Jumaane Williams.

LGBTQ Nation spoke with a person who attended this rally and others as well. Aaron, a non-binary attendee, identified only by their first name for their safety, described the events as “kind of escalating a bit more” every week.

“The cops, from the get-go, had been trying to escalate it for the last two, four weeks,” Aaron says, “but at this one, they were… in some ways containing it, in their eyes?”

Taking part in a group of musicians that performs at “We Choose Freedom,” Aaron explains that the understood agenda for the event is to meet at Stonewall, where “a rally there that centers the organizers who are Black and trans” takes place, followed by a procession throughout lower Manhattan, normally through the Village, and sometimes as far as 34th Street and back.

While the NYPD have taken note and begun increasing their presence at the event, Aaron says that most people “were non-violent, not really engaging” with them. Soon, a group of bikers began accompanying the march, and “they basically form a fence between the cops and the protests. The cops have their bike force, and we would have kind of our own.”

At this latest occurrence, organizers and attendees went about things as normal. “People weren’t really starting sh*t, for the most part,” Aaron explains. “[But] this one felt a little different. Like, not a ball, you know?”

They continue, “the bike cops – who were mostly who I saw, in motocross gear – were lined up on the curb and would be riding along with it, so that basically they were a fence on both sides. We were on the street, they were between the street and the sidewalk – which obviously is kind of crazy when there’s all this outdoor dining and the division between street and sidewalk gets messy.”

According to Gay City News, activist and co-organizer Joel Rivera told the crowd, “We have a lot of police presence here, the most I’ve ever seen in the past 21 weeks, but we are going to march. If they do or when they do attack us, we will link arms. We will not run away.”

As Rivera and fellow co-organizer Qween Jean – both Black and trans – led the crowd through the usual procession, Rivera found officers had started to arrest people, and she question them as to why. Someone reached toward the lines of officers and their hand made contact with an officer’s helmet – and just like that, she, too, was arrested and later charged with “possession of a bullhorn.”

Rivera described being “tackled by, I don’t know how many officers” while in a gown and heels: “I had a bike on top of me… I was just in pain.” After, video of her arrest shows Rivera screaming that the police officers were “hurting” her.

“You’d think I killed somebody.”

Rivera “lost” her shoes during the arrest, and claims that all that officers would offer her to use in the mid-November weather was manila envelopes. She was bleeding as well, and officers refused to give her first aid.

On Instagram after, Rivera alleged that attendees “were targeted and attacked by the NYPD. They come out to instigate but our sense of community is stronger [than] their scare tactics.”

“This was NYPD’s planned attack against a Black trans organizer,” ACT-UP NY member Jason Rosenberg tweeted. “I have no doubt.”

“I didn’t hear about [Rivera’s arrest] until I got to the end, at Union Square,” Aaron says. Attendees that made it to the square’s park were met with “hundreds” of police officers. Once a water bottle was thrown, people were ordered to disperse from here – but the police officers were surrounding them, forcing them “deeper” into the park instead of allowing them to leave.

“We kept running into intersections where the cops would then block us from going and we would have to like peel off or go [further] in or whatever,” Aaron describes it here.

This tactic, known as “kettling,” has become common tactic for law enforcement across the country in attempts to escalate peaceful protests, and deter protestors from returning.

Once arrests started, Public Advocate Williams made his presence clear. He “urged the police to remain calm,” reports say, but videos show the NYPD ignoring him and continuing to use their array of weapons and bicycles to make attendees “disperse”, even those that seem to try to follow their directions.

Officers eventually turn and shove Williams with bikes, as onlookers scream “Oh my God” and “stop.” One person is heard in a video apparently says to officers, “do you even know who this is?”

“NYPD was trying to clear the street to make an arrest. Aggressively. Officers then appeared to begin setting up for mass arrests — we intervened to try and de-escalate and prevent that,” Williams wrote on Twitter. In an apparent jab at Mayor Bill de Blasio, he also wrote that “most importantly, there seems to be a lack of leadership when the City needs it the most.”

Members of the press – included those credentialed to be present at events by the NYPD themselves – were not safe either. Roger Stern, a reporter for radio station 1010 WINS, wrote online that he was “knocked to the ground” and he “did not understand why officers charged a peaceful demonstration.”

At least 19 other attendees were booked by the police that night, eight receiving summonses and ten with desk appearance tickets. The NYPD alleged on Twitter that one of their officers was “pushed to the ground & had this chain pressed against his throat,” attaching an accompanying picture. They charged a 30 year old man with prior penal history with the assault, the only criminal charge to arise from that night’s events.

Still, people believe the NYPD is causing the violence, leading to attacks on both sides.

Tiffany Cabán, an attorney who identifies as queer and a candidate for New York City Council, wrote in a statement that “We again witnessed the NYPD brutalize people who were practicing their Constitutional right to protest in defense of Black lives and in defense of our democracy,” Cabán said.

“We saw the NYPD accost and assault our public advocate, Jumaane Williams. The public advocate is the second-most powerful position in the City, and is meant to be a check on the mayor, who is supposed to be in charge of, and, a check on, the NYPD. The police did not care,” she charged.

At other events throughout the week, the NYPD were criticized for increased use of kettling – blasting recorded orders to disperse via speakers, then surrounding those who remain and not allowing them to leave, whilst continuously ordering them to do so and then arresting them when they don’t.

Since the election, and as it became clearer that Joe Biden would win the election for President, the NYPD continued to target and disperse protests or celebrations.  25 were arrested and at least 32 were given summons at a protest in the West Village area of downtown Manhattan just the day before the Stonewall rally.

The New York Times called this “a reprise” of the anti-protest brutality that the NYPD exhibited this summer.

This follows a series of events where police officers intimidated residents of the city or expressed hateful rhetoric. Most recently, an officer was suspended for repeatedly taunting Flatbush residents with “Trump 2020” and other pro-Trump messages, while on-duty, from a NYPD vehicle.

James Kobel, the deputy inspector in charge of the NYPD Office of Equal Employment, was found to have disparaged Black people, Jewish people, LGBTQ people and women for more than a year using a pseudonym online for years. He “mocked [Williams] for having Tourette’s syndrome” and called Mayor de Blasio’s son, Dante, who is Black and is known to have an afro, a “brillohead.”

“It’s so unfortunate that 50-plus years since the Stonewall Riots…It is very ironic how it’s the same situation, the same disease that’s still going on,” Rivera said in an interview after her arrest. “It is scary to have to do this, but it is very necessary. We go home and we cry, we feel so [many] emotions.”

When asked about police violence this week on a regular radio appearance, Mayor de Blasio said he “didn’t have any information on that” despite Public Advocate Williams’ presence – in addition to his own press secretary’s attendance at a protest the night before. When pressed by a caller, he would only say that “if people feel” that there is “militarism” coming from the NYPD, he would step in.

Aaron believes that despite the struggle with police, the group attending the event “stayed tight, they kept it together,” and credits Qween for “pull[ing] everyone together.”

NYPD was trying to clear the street to make an arrest. Aggressively.

Officers then appeared to begin setting up for mass arrests— we intervened to try and de-escalate and prevent that.

Most importantly, there seems to be a lack of leadership when the City needs it the most. https://t.co/ij7xxwCwT5

https://t.co/M2QOKNmAVc #NYPD knocks me to the ground as they use bicycles to push protesters further into Union Sq Park after getting them off the street. Not clear why officers continued pushing peaceful protesters after street was clear. #1010WINS

I don’t even know what to say anymore. No one is going to rein them in or hold them accountable. There’s no honor in your public service, officers. Continuing to invest in this policing system is a travesty. https://t.co/k3vHuwFz5L