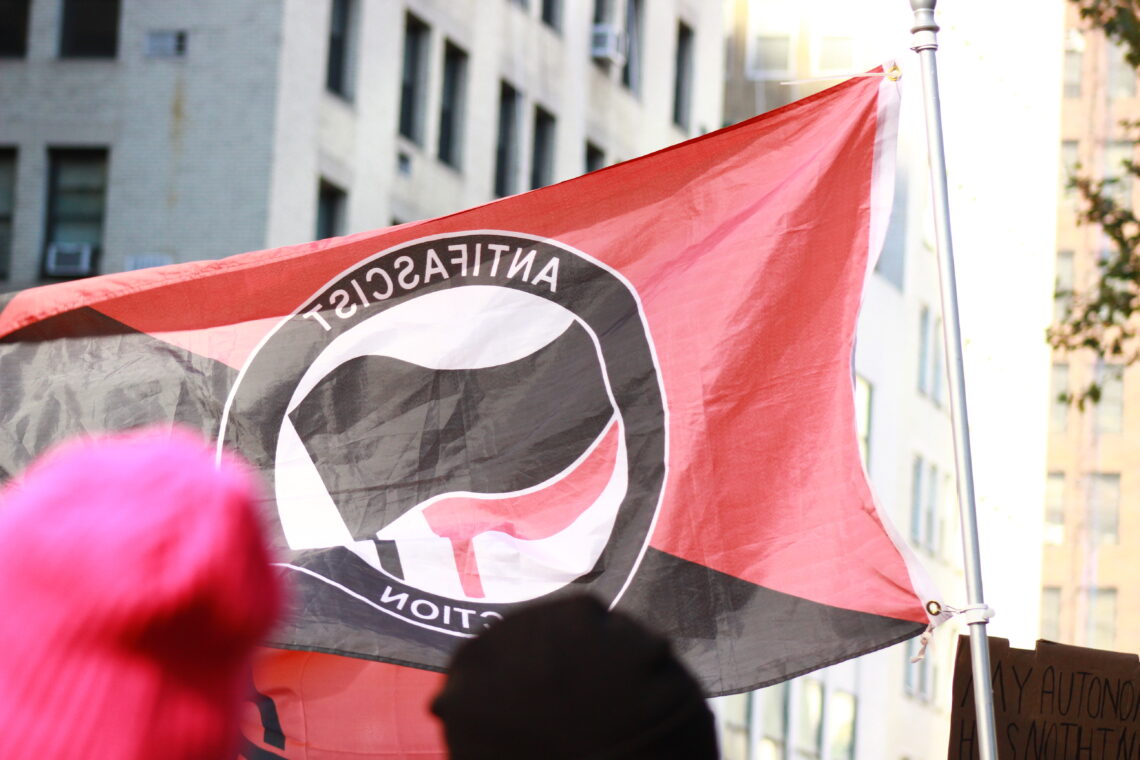 Kellie-Jay Keen-Minshull, also known as Posie Parker, is a notorious gender critical, anti-trans activist from Britain. Keen-Minshull and a group of other transgender-exclusionary radical feminists (TERFs) ended their 11-city national speaking tour, “Standing for Women”, on Monday afternoon in New York City. Approximately 100 trans activists and allies, organized by the abolitionist group WarmUp NYC, showed up to counter the tour with a noise demonstration. The NYPD were quick to arrive, eventually outnumbering protesters, and arresting less than 10 activists.

Keen-Minshull didn’t show up to her own talk because the police refused to bring her. In a YouTube live she claims that “women have no right to speak,” and that police told her they “won’t risk their men” when faced with counter-protesters. Parker describes the decision as an indication of the times.

“I actually think when it comes to telling the story, it’s indicative of the United States in 2022, and how they feel about women speaking,” said Keen-Minshull to her followers. Contrarily, on her first stop in Los Angeles, she was met without a counter-protest and no police presence, according to the Washington Blade.

Keen-Minshull and her allies believe that the existence of transgender people erases cisgender women, rather than expanding the definition of womanhood to all trans and gender-expansive people. “This is very exciting. We’re going to change the world ladies,” Keen-Minshull said when she announced her tour dates in a video posted to Twitter.

This is only a glimpse into the international fight for trans rights and the anti-trans, anti-equality mechanisms on both coasts of the Atlantic Ocean.

For pro-equality protestor, Baph Nayer, the protest was one of his firsts.

“For me as a transgender man, I really despise these people to the core of my being,” Nayer told LGBTQ Nation. “I hate TERFs. I hate right-wingers. I really think they should just – to keep it polite – leave, perhaps the entire Earth.”

Nayer says the rhetoric of extreme, gender-critical feminism is dangerous to trans people. With the Transgender Day of Remembrance being observed today, the community mourns the murder of at least 32 trans people in the United States, disproportionately Black and Latine trans women, according to the Human Rights Campaign.

Protesters were determined to fight against the day’s anti-trans rhetoric, which is often what fuels lethal anti-trans hate crimes.

“I’m making sure that this group of people understands that we don’t allow for any type of hate against the trans community in New York City,” a protester who goes by the name of “Rebel” told LGBTQ Nation.

Flags reading “Antifascists Action,” a militant anti-fascist organization founded in the UK in 1985, pooled into the group of trans and allied resistors.

Chants like “TERFs go home!” filled the air along with whistles and cowbells.

While Keen-Minshull self-identifies as a gender-critical lesbian rights activist, she has entertained the most dangerous anti-LGBTQ hate groups in the country. On a trip to New York in January 2019, Keen-Minshull and lesbian anti-trans activist Linda Bellos (who’s since been critical of Keen-Minshull) attended a panel of the Women’s Liberation Front (WoLF), an anti-trans organization. The panel was organized by the anti-LGBTQ Heritage Foundation and titled, “The Inequality of the Equality Act: Concerns From the Left”.

Nayer said that this hate has reached his home too.

“I have a very vague notion of who this woman [Kellie-Jay Keen-Minshull] is, and all my notions are awful,” he said. “She’s hurt my friends, she’s hurt trans people and people I randomly know because trans people always have family who’ve been targeted by a TERF.”

Without Keen-Minshull there to lead her discussion, known anti-trans activists like Jeanette Cooper, Amy Sousa, and alt-right independent media like Elad Eliahu harassed trans people in the crowd by laughing, pointing and misgendering people en masse. They and their anti-trans peers smiled as they displayed the protesters’ anger on live videos. They held signs with horrific transphobic slurs.

“I’ve been on testosterone for eight years,” one protester says in a video posted to Elad Eliahu’s Instagram. “I am a transgender boy and a valid one.”

Protesters and police pushed and pulled the barricades. This frightened and empowered some protesters.

“I’m a little bit scared by the cops that are coming out,” said protester Tobi Corredor. “It’s kind of embarrassing that it’s mostly cops [behind the barricade] right now.”

Corredor said that fascism has no place in New York City, and that by standing up, activists are representing an alternate world where people can be free to be who they are, rather than who they’re told they ought to be.

“They’re smart. I guess [anti-trans activists] kind of anticipated this. Apparently they’re going to be here until 4 p.m., but we are going to stay here just as long. You just gotta stay strong,” they said.

Cynthia Cote, originally from Denver, Colorado (one of Keen-Minshull’s tour stops), said she felt empowered too.

“Why are we here? Why now? Because of all this,” said Cote, pointing to anti-trans speakers and police. “I’m embarrassed that the NYPD is out here defending those who are behind the barricades causing all the violence.”