Tom Daley wins his second medal at the Tokyo Olympics. He did it while knitting. 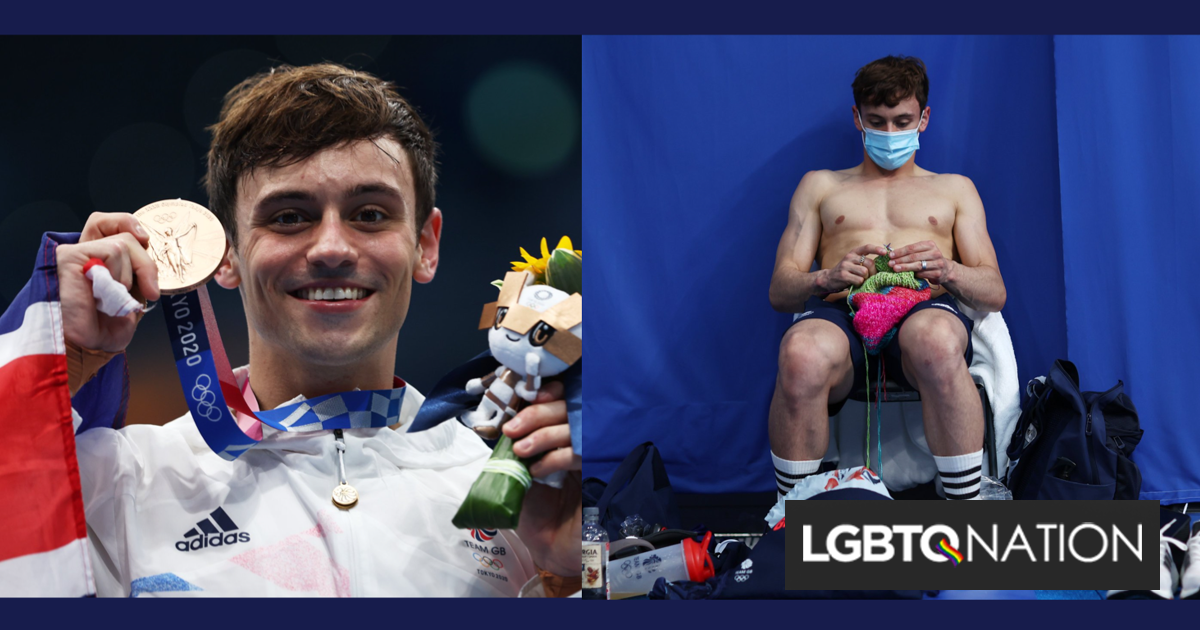 Olympic diver Tom Daley earned a bronze medal in the 10-meter platform diving competition at the Olympics. It’s his second medal of these Games, being held in Tokyo.

He did it while knitting, too.

Related: Olympic diver “wouldn’t be here” if not for his gay dad

Earlier at the Games, Daley earned his first ever gold medal when he and his partner, Matty Lee, won the 10-meter synchronized platform diving competition.

Now the Briton diver has earned another bronze medal, only his second medal in solo Olympic competition.

Jordan Windle, who was raised by a gay single dad, finished ninth with 409.30 points.

While the competition was tight, Daley was far from stressed about it. He took the time between dives to keep knitting, even during the semifinals.

This isn’t the first time that Daley has knitted at the Olympics, as he’s habitually bought the hobby with him and put it on display during the trip to Tokyo.

It’s earned him adoration around the world and made him a viral sensation online.

Likely as much as becoming the most decorated British diver in Olympic history may have.

On Instagram in a story, Daley said, “Knitting helped me find my calm, stay [focused], stay mindful and you can do it ANYWHERE!”

Daley, 27, has represented the U.K. at the Olympics since 2008, when he was 14. He is married to Oscar-winning filmmaker and screenwriter Dustin Lance Black, and they have a son, Robbie, together.

He had won two other Olympic bronze medals, but until last week, the gold had eluded him.

“My husband said to me after Rio that… maybe you weren’t meant to win gold this time because your son was meant to watch you win an Olympic gold medal,” Daley said after the competition, “and the fact that I did that and then also another individual medal, which makes it four… my husband and son, I’ve got to thank for so much of this along with my coaches and support team.”

Sure enough, Daley’s son Robbie has watched the competition, which came to an end early this morning.

“He woke up for a little bit of the competition and then got put back to bed because he was falling asleep, obviously,” Daley reported, “but I got to speak to my mum and Lance and, obviously, they’re over the moon.”

Daley also shot back at homophobic attacks on him in media around the world, namely in Russia state media.

“History shows that everything that society is, [and] has been, dictated from the straight white male experience. If we could come together and use different points of view, the world would be a better place,” he said. “There are lots of people who grow up around the world in less fortunate situations. I just hope that seeing out sportspeople will help people to feel like they are less alone, like they are valued, like they can achieve something.”

He added, “I am so happy that this Olympics has gone the way it has. I feel like a different athlete, I feel like I’ve been through so many different things over the years.”

Already, Daley is thinking ahead to the 2024 Olympics.

“I’m definitely going to have a break and a few margaritas, but don’t rule me out for Paris,” he quipped.

Are you kidding me?! Another Olympic medal! Two for two! So so so proud of you my love! Now bring those medals home my sweet champion. 🧶 pic.twitter.com/QMCvlQo0uD

“I’m definitely going to have a break & a few margaritas, but don’t rule me out for Paris,” he tells me with a wink. pic.twitter.com/xNFSN7PoHS