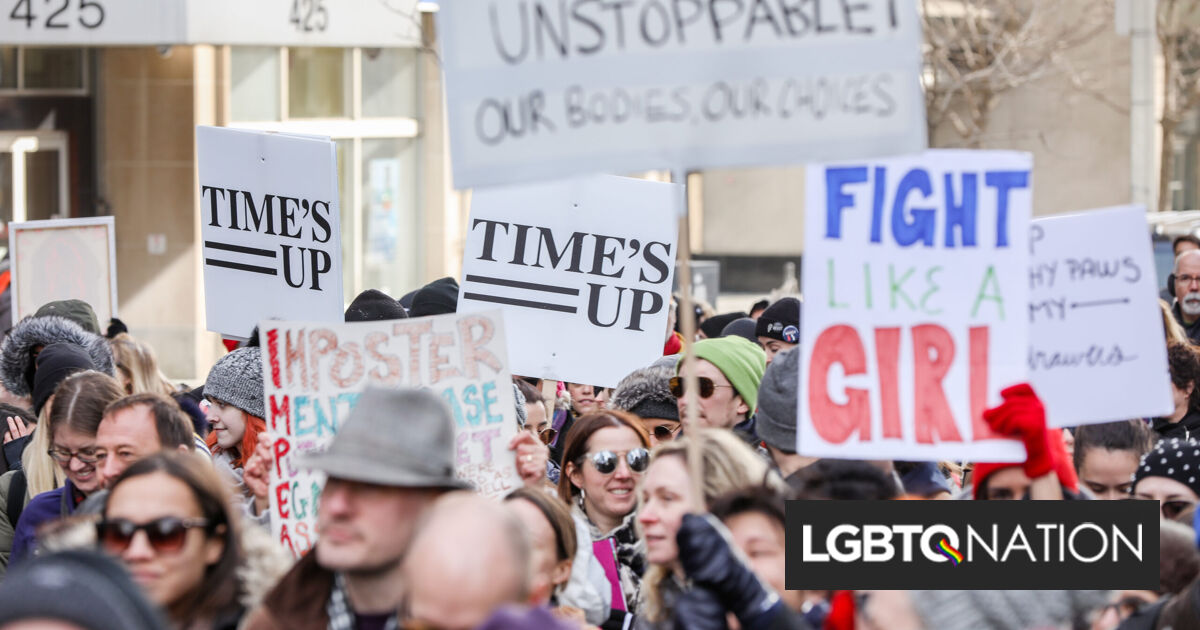 It was just under four years ago that many around the world celebrated the news that over 300 women in entertainment, and many LGBTQ activists, declared #TIMESUP in an open letter.

Today, the organization derived from that, Time’s Up, decided that the time was up — at least for its initial and current incarnation. Yesterday, the group — once chaired by out lawyer and LGBTQ trailblazer Roberta Kaplan — and its adjacent charities dismissed nearly every staff member left in an effort to undertake “a needed reset, not a retreat.” This follows a report revealing Kaplan’s alleged part in helping former New York Gov. Andrew Cuomo (D) discredit one of his harassment accusers, which also implicated now-former Human Rights Campaign president Alphonso David.

Related: The Human Rights Campaign is imploding when it couldn’t be needed more

News of the “reset” came out just minutes after the people still on staff at Time’s Up were themselves informed, according to the Daily Beast. Board member Ashley Judd and Board Chair Gabrielle Sulzberger told the staff at a meeting at 1:00 pm eastern time, and the Washington Post first reported the news at 1:15 pm.

In addition to laying off their staff, Time’s Up will cease all “on-the-ground” operations on January 1, to return at a later, but currently undetermined, future date. The Daily Beast reports that Judd, a founding board member, began crying as staff questioned why the decision was being made.

Stacey Ferguson, formerly the digital director of Time’s Up, recalled, “They said on the call, ‘The Washington Post is releasing a piece right now.’ Some staff members were like, ‘Oh my god, my mom is going to read about it before I can tell her.’”

Time’s Up is only retaining three employees: their chief financial officer, chief development officer, and head of entertainment. The rest of the approximately 25 people on staff, even those not in leadership during Kaplan’s and Tchen’s tenures, are being entirely dismissed.

“To paraphrase what a colleague shared on the call: For an organization that’s supposed to be advocating for fair and dignified workplaces, this feels like the opposite of that,” Ferguson said.

An anonymous ex-employee said to the Daily Beast, “Most of us weren’t in the leadership team when the Cuomo stuff happened, yet we’re the ones being punished for past actions of the organization. Yet again, Time’s Up is putting the interests of the organization over its own staff members. We’ve obviously become collateral damage in all of this.”

The decision is yet another development in the fallout from New York Attorney General Letitia James’s (D) investigation into then-Gov. Cuomo’s use of his office and executive privileges to respond to allegations that he had sexually harassed and inappropriately touched multiple women. James’s report found Kaplan, David, and multiple other LGBTQ community leaders had participated in one effort to uncover information that could discredit one of Cuomo’s accusers, former aide Lindsay Boylan.

In August, after James’s report was released, Cuomo’s top aide Melissa DeRosa resigned, and Kaplan announced her resignation from Time’s Up next. Tchen soon followed suit.

The Human Rights Campaign then put David under investigation, and then dismissed him in September after David alleged the organization had no evidence of any wrongdoing on his part in their investigation, but was trying to fire him anyway.

Amidst that, Cuomo eventually announced his decision to resign, despite proclaiming that he had done nothing illegal. Lt. Gov. Kathy Hochul succeeded him in office as governor on August 24.

Prior to that, Kaplan also served as the board chair for the Gay Men’s Health Crisis (GHMC). Kaplan has also become known for filing lawsuits against former president Donald Trump, including on behalf of his out niece, Mary L. Trump.

“I became the go-to person to sue the president,” Kaplan once said.

When several Hollywood stars came together and wrote their open letter in the New York Times on New Year’s Day 2018, declaring the creation of the social justice organization Time’s Up, Kaplan was chosen as the chair, and she co-founded the group’s adjacent non-profit Time’s Up Legal Defense Fund with Tina Tchen, who became CEO of Time’s Up in 2019. Tchen previously served as First Lady Michelle Obama’s chief of staff. (The Legal Defense Fund is now run independently by the National Women’s Law Center.)

At the time of its initial founding, out LGBTQ actors and producers such as Lena Waithe, Elliot Page, Cameron Esposito, Evan Rachel Wood and Joey Soloway were those who helped Time’s Up. The group not only planned for the organization to change the entertainment industry in light of the #MeToo movement, but bringing equal representation of women of color and LGBTQ people to Hollywood as well.

Within a few years, controversy after controversy began to mire the momentum the organization had, and it culminated when both Kaplan and Tchen were named as people advising Cuomo this summer. Along with the news, Time’s Up released initial findings from their internal investigation into their part in the scandal.

In their statement, Sulzberger says, “TIME’S UP stands for accountability and systematic change in the workplace. It is incumbent on us to learn from these findings, and focus on building an organization that powerfully serves women of all kinds and ends the impunity of sexual harassment and assault in the workplace.”

“We persevere,” Monifa Bandele, now-interim CEO of Time’s Up (until January) said in the organization’s statement. “We will not lose the ground gained for women’s equality and safety over these last several years. Our movement and the stakes for our entire society and future generations are so much bigger than one organization or title.

“We will continue to make significant contributions, both through work led by Time’s Up and beyond.”

1/ The Governing Board of Directors of #TIMESUP today announced a major reset of the women’s rights organization. The decision follows the completion of an initial phase in a comprehensive management review by an independent consultant.

3/ “We persevere. We will not lose the ground gained for women’s equality and safety over these last several years,” said Monifa Bandele, #TIMESUP Interim President & CEO

Some of these employees likely were solid people trying to do right and now they’re entering the holiday season bracing for unemployment because powerful folks couldn’t help but help a harasshole instead of simply do their job.