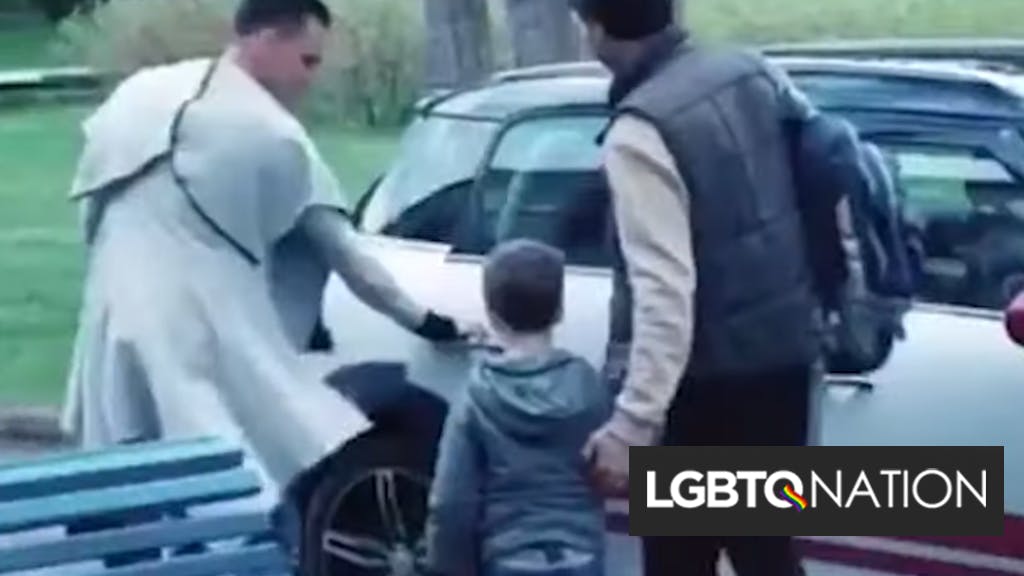 A ridiculously homophobic ad that involves an old lady spitting at a gay couple that adopted a child is being aired in Russia ahead of a vote on constitutional amendments.

A woman is recording a video in the ad, which is set in 2035. She is in an orphanage and she shows a boy. A man comes in and greets the boy, and everything seems like it’s going fine.

The man leaves the orphanage with the boy and stands in front of the door with the woman who is filming and an old lady who works there. And that’s where the ad turns sinister.

The boy turns to the man and asks where his new mother is.

The new “mom” appears to be a man wearing jeans, a billowy jacket, and make-up, visual cues to show that he’s feminine.

The woman recording looks shocked when she sees him, the little boy looks sad, and the man tells the boy, “Don’t be upset.”

The dad with make-up on then gets a little dress out of the car, implying that they’re going to force the boy to dress like a girl to “recruit” him.

The old lady who works at the orphanage spits towards the men and walks away in disgust.

“What Russia do you choose?” a voiceover says. “Decide the future of the country. Vote for the amendments to the constitution.”

The atrociously homophobic ad is meant to shore up support for a a set of constitutional amendments that are up for a vote in Russia on July 1. One of the amendments is a constitutional ban on same-sex marriage.

The amendments have been pushed by Russian President Vladimir Putin and would also allow him to run for re-election two more times.

“Putin’s officials have gone completely out of their minds on the subject of homosexuality,” tweeted opposition politician Alexei Navalny, according to the Moscow Times.

The ad is funded by a group called “Patriot,” which defended the ad and said they’re “not campaigning against homosexuals” but “defending the institute of family as a union of a man and a woman” in a statement earlier this month.