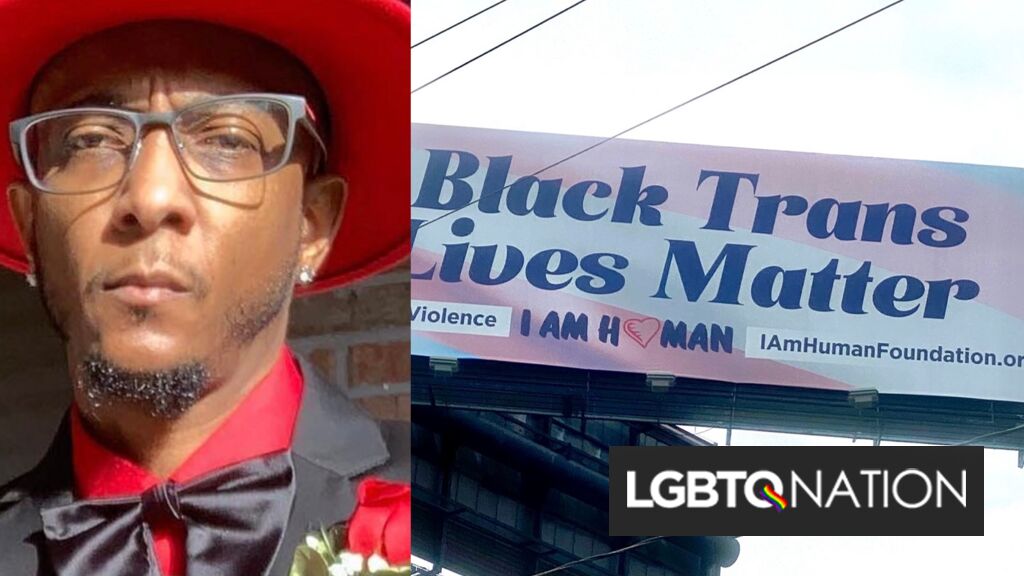 Alex Santiago of the I Am Human Foundation has missed stories of violence against Black trans people in his own city of Atlanta, Georgia, and he decided to address that.

He went out to buy a billboard in the city, known to some as the “LGBT Capital of the South” for its LGBTQ population and LGBTQ-friendly measures.

“There was a lot of conversation back in the summer with the Black Lives Matter [protests] and there was even a divide in the LGBTQ community,” Santiago told the Blade, “where they were saying, ‘okay, well are we included in that? because, you know, when it comes to cisgender Black people, they don’t include us.’”

Santiago is the Executive Director of the I Am Human Foundation, whose mission is to create a safe space for individuals who are homeless, living with HIV, and are trans youth. In addition, he co-chairs the Atlanta chapter of FLUX, a network for trans and gender non-conforming people started by the AIDS Healthcare Foundation.

At first he was all for supporting the Black Lives Matter movement when it erupted in popularity this summer, but Santiago came to understand why his Black trans and queer peers. They noticed that were not embraced openly by those leading the movement, although it is co-founded by four women — two of whom are out, Alicia Garza and Patrisse Cullors.

“You know what? Maybe we’re not included in that,” Santiago thought. This was especially how many believed in Atlanta, where the atmosphere has “very little trans support” openly.

Santiago decided that needed to change. He met with a local company and planned to buy a billboard.

“I was like, okay, I got to bring awareness to Atlanta that we’re here and that we matter,” he explained.

But to Santiago’s surprise, the company was so excited to place the spot, they allowed him to place them on three more billboards, bringing his total to four for the price of one.

Three of the billboards read, “Black Trans Lives Matter,” and included the hashtag “#StoptheViolence” and the website for the I Am Human Foundation. One simply denotes “I Am Human” and the Foundation’s slogan, “Empowering Lives One Human At A Time.” It also directs readers to their website, IAmHumanFoundation.org.

On their website, they state that the ad campaign is “bringing awareness to the violence surrounding trans individuals of color.” I Am Human will “strategically place billboards in major cities throughout the year emphasizing that Black Trans Lives Matter.”

The murder of Bianca “Muffin” Bankz in Atlanta happened a week before the first billboard went up — but “I didn’t know anything about it,” Santiago said, until he read it on the Human Rights Campaign (HRC) website.

“It’s like, how do I not know in my own city that this happened?”

Bankz was 31 and a former foster child that had recently begun transitioning, and had dreamed of becoming a contestant on RuPaul’s Drag Race. The Trans Housing Coalition, which supported her in moving into her own apartment in Bankhead near Atlanta, was suddenly helping pay for her funeral within a month.

On January 17, multiple gunshots were heard in the area, and responding police officers found Bankz and another man dead.

TaSheena Brown, a senior police officer in the Atlanta Police Department, made a statement that “[Investigators] are not looking for any outstanding people of interest in this case. This was not random and is not a threat to the public.” This, and other sources, indicates that people believe she was a victim of a murder-suicide.

So Santiago is aiming closer to Atlanta’s City Hall for his next billboard, “because I just feel like … nobody cares.”

The four billboards are lined up throughout areas near Interstate 75, Interstate 85 and U.S. Route 23, making them visible to thousands of commuters driving through South Atlanta, Downtown Atlanta, and the Old Fourth Ward in the Northeast section on any given day.

So over a month after the first one went up, they remain.