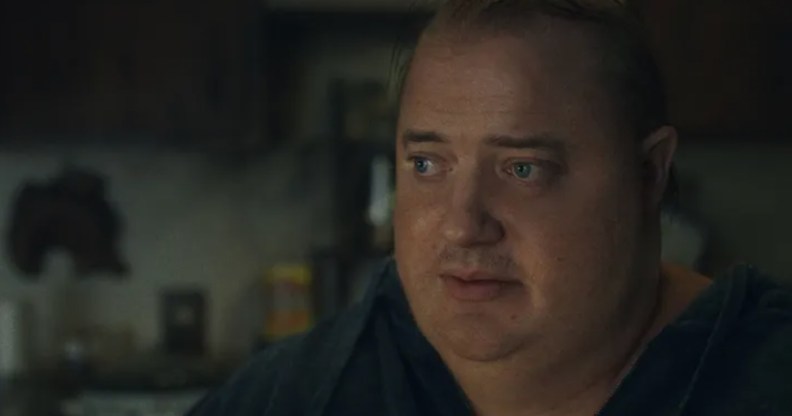 Comeback role: Brendan Fraser in Darren Aronofsky’s The Whale. (A24)

The full-length trailer for Brendan Fraser’s highly-anticipated new film The Whale has finally landed – and it’s an emotional watch.

Based on the 2012 off-broadway show of the same name, the drama follows the story of Charlie, a reclusive 600-pound gay English teacher who attempts to reconnect with his estranged teenage daughter, Ellie (Sadie Sink) after his male partner dies.

The emotional trailer gives a deeper insight into Fraser’s Golden Globe-nominated performance as we see Charlie grappling with body issues and butting heads with his daughter, whom he hasn’t seen since he left her with her mother when she was eight years old.

The film first created a buzz at its world premiere at Venice Film Festival where it received a six-minute standing ovation.

For many, the film marked Brendan Fraser’s triumphant return to the industry after a long absence following his allegations that the former president of the Hollywood Foreign Press Association (HFPA), Phillip Berk, groped him.

HFPA organises the annual Golden Globes award ceremony, and although Fraser’s performance in The Whale has been nominated for best actor, he will not be attending.

The Whale, which come to UK cinemas in February 2023, has already sparked a strong reaction online.

“Watching the newest trailer for The Whale and being reminded of just how incredible Brendan Fraser’s performance is in that movie, I just need him to win the Oscar,” one person wrote.

“The way I cried with the trailer of the whale is unhealthy. That movie is going to break me I know it,” another added.

What is the controversy around The Whale?

Despite significant praise for Fraser’s performance in the film, The Whale has also attracted its fair share of criticism throughout the industry, with early reviews calling out director Darren Aronofsky for perpetuating fatphobic tropes.

Critics have raised concerns over its dehumanisation of fat people and Fraser’s use of a fat suit instead of hiring an actor of a more appropriate weight to take on the role.

“The most exciting part of the release of The Whale is getting to read all the ways film critics will apply the full might of their BA in English to the task of describing how gross bodies like mine are!” he wrote.

Roxane Gay, meanwhile, wrote in the The New York Times: “How this film deals with Charlie’s fatness is egregious, exploitative and at times, cruel.”

The concerns were first addressed in an interview with Vanity Fair in August in which Fraser spoke about having to wear the 300-pound fat suit.

“I learned quickly that it takes an incredibly strong person inside that body to be that person,” Fraser explained. “That seemed fitting and poetic and practical to me, all at once.”

In response to the criticism, director Darren Aronofsky told Yahoo Entertainment: “Actors have been using makeup since the beginning of acting — that’s one of their tools. And the lengths we went to portray the realism of the make-up has never been done before.

“One of my first calls after casting Brendan was to my makeup artist, Adrien Morot. I asked him, ‘Can we do something that’s realistic?’ Because if it’s going to look like a joke, then we shouldn’t do it.”

“People with obesity are generally written as bad guys or as punchlines. We wanted to create a fully worked-out character who has bad parts about him and good parts about him.

“Charlie is very selfish, but he’s also full of love and is seeking forgiveness. So [the controversy] makes no sense to me. Brendan Fraser is the right actor to play this role, and the film is an exercise in empathy.”