The Sterilization of Leilani Muir

This post is about a woman I have become familiar with over the last number of years.  It was when she passed away in 2016, that I started reading and learning about her.

To get started, Leilani Marietta (O’Malley) Muir was the first person to file a successful lawsuit against the Alberta government for wrongful sterilization under the Sexual Sterilization Act of Alberta.  Yes, we DID have that.  You won’t believe who was involved in promoting it either (but we have parks dedicated to them here in Edmonton).

Leilani’s case wound up leading to the creation of a number of other “class action” lawsuits against the province, also for wrongful sterilization.

Her advocacy work shed light on eugenics, institutionalization, human rights for persons with a disability, and self-advocacy.

She was born into a poor family in Calgary, Alberta.    As she was a generally unwanted, unloved, and abused child her mother looked for ways to remove her from the family and, when Muir was eight, placed her in the Midnapore Convent for a month. Then, in 1953, her mother sent an application for Muir to be institutionalized at the Provincial Training School for Mental Defectives (also known as the Michener Centre) in Red Deer.

Leilani lived at the Provincial Training School for two years and four months before she underwent an intelligence quotient (IQ) test. Low IQ was a major criterion for sterilization. She was brought to the Calgary Guidance Clinic to take an IQ test a week before meeting with the Eugenics Board and scored an overall mark of 64. Muir was formally diagnosed as a “Mental defective Moron”. The Board used Muir’s IQ score as sufficient grounds for her sterilization, as a score lower than 70 was considered degraded intelligence. Although she was not told at the time, the Board ordered that she be sterilized. Other factors that increased the likelihood of sterilization were Muir’s Irish-Polish background and Catholic religion,[her presumed incapability of intelligent parenting, and that she had “shown definite interest in the opposite sex” while living in a public institution.

On January 19, 1959, doctors performed a bilateral salpingectomy (destruction of the fallopian tubes) on Muir. She had been told that the surgery was to remove her appendix. She would not find out until nearly a decade later why she could not bear children.

Since Muir’s case, the Alberta government has apologized for the forced sterilization of over 2,800 people. Nearly 850 Albertans who were sterilized under the Sexual Sterilization Act were awarded C$142 million in damages.

In 1996, a documentary was released about Muir’s life called The Sterilization of Leilani Muir. Produced by the National Film Board of Canada, the film won awards at the 1997 HESCA Film Festival in Lake Tahoe, Nevada, and the Western Psychological Association Film Festival in Seattle, Washington

*  some details taken from Wikipedia

One of the main advocates of eugenics who helped pass Alberta’s sterilization law was the first female magistrate of the British Empire, Emily Murphy, (you read that right) who was also one of the Famous five (canada) who campaigned for women’s rights in the 1920s.

Under her influence, many Albertans, especially farmers who saw first-hand what selective breeding can do to enhance livestock quality, agreed that eugenics could be used to improve human stock as well.

One of the people influenced by Murphy’s opinions was the Minister of Agriculture and Health, George Hoadley.  He convened the first meeting of the Alberta Eugenics Board a year after the Sexual Sterilization Act was passed.

This Board interviewed all people considered to have inferior genetic stock and approved the sterilization of 4,725 of 4,800 cases. The three-member Board elected a fourth member John M. MacEachran to act as chairman, a position he held until his death in 1965.

MacEachran was a key figure in promoting the continued sterilization of people who were seen as degenerates and “incapable of intelligent parenting.” Inmates of Alberta mental institutions were particularly vulnerable to sterilization under this Act and the Board’s practices.

The Famous 5 contained members who actively promoted eugenics and played a part in it’s use.  Emily Murphy and Nellie McLung both have parks in their honor in Edmonton, with Murphy also having a statue. 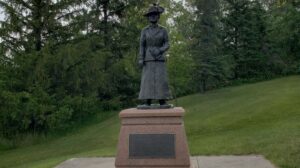 My Suggestion: Replace Emily Murphy’s statue with one of Leilani Muir

In 1996, Leilani Muir won a landmark legal case against the Canadian province of Alberta for wrongful sterilization and confinement at the Provincial Training School in Red Deer, an institution for “mental defectives”. Surviving Eugenics traces the history and ongoing significance of eugenics in Canada. Anchored by survivor narratives from Leilani and four other eugenics survivors from Alberta, and drawing on expert testimony from those involved in the case, Surviving Eugenics provides a unique insiders’ view of eugenic history while raising broader questions about disability and human variation in contemporary North American society.