The State Department raises the Progress Pride flag over their headquarters 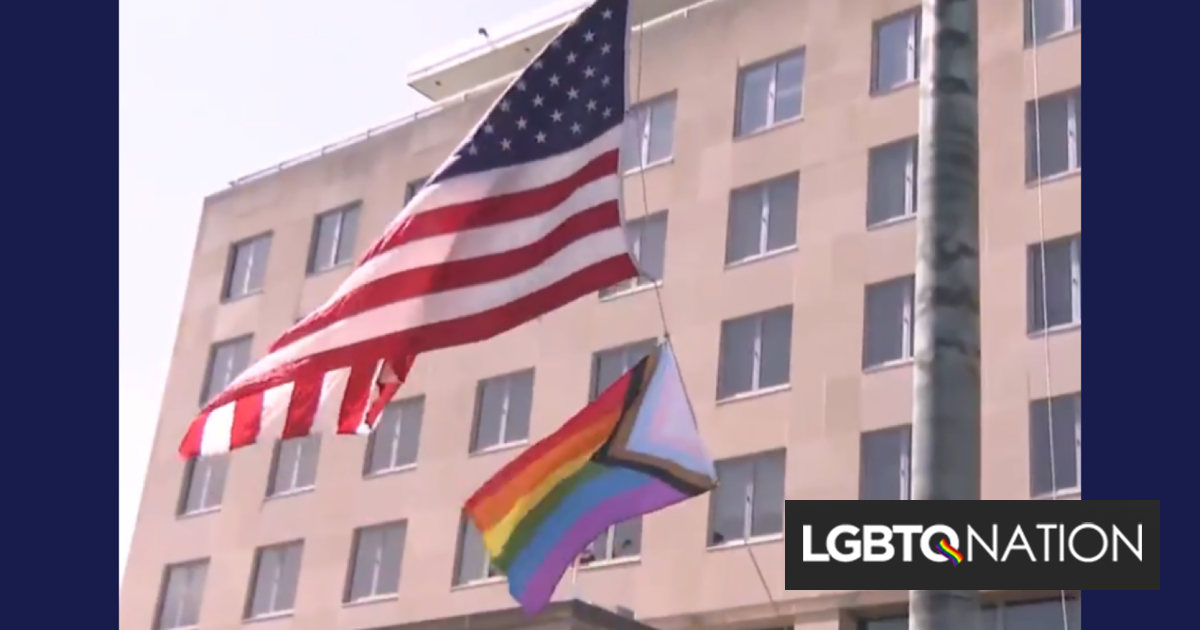 The State Department officially raised a Pride flag for the first time over its headquarters on June 25. The flag chosen was a new yet popular rendition of the rainbow Pride flag, the Progress Pride flag, which the Department deemed as “a symbol of the diversity and intersectionality of LGBTQI+ persons and communities around the world.”

Deputy Secretary of State Wendy Sherman, Chief Diversity and Inclusion Officer Gina Abercrombie-Winstanley, and the Jeff Anderson, the President of glifaa, which is the officially recognized affinity group for LGBTQ State Department employees, were all on hand and assisted raising the flag right underneath a larger American flag.

Secretary of State Antony Blinken said in a tweet, “I’m truly honored to serve as Secretary during this historic moment.”

“Although many of our embassies and consulates have displayed the Pride and Progress flags overseas, today is the first time a flag recognizing the LGBTQI+ community will fly over State Department headquarters,” Sherman said in remarks delivered at the flag-raising ceremony in front of the headquarters, the Harry S. Truman building.

The State Department is permitting embassies around the world to fly Pride flags again, reversing the policy created under former Secretary of State Mike Pompeo and the Trump administration in 2020.

Yet, another ban made under the Trump administration remains in place. The Pentagon is continuing a policy enacted by the Defense Department under Trump which will prevent any Pride flags from waving on military property.

“Our mission is to serve the interests of the United States and to promote American values around the world,” Sherman said. “Our ability to stand up for human rights, for democracy, and for justice overseas is utterly dependent on the actions we take here at home.”

She noted that “As much progress as we have made as we are celebrating today, we still have work to do to guarantee equality for LGBTQI+ people in our workplaces, in our schools, at the Department of State, in our government, and in our society.”

This is the third time the Progress Pride flag has flown officially on federal government property this month. The Department of Energy’s secretary Jennifer Grisholm raised that flag above the agency’s headquarters earlier this month, and the Department of the Interior’s secretary Deb Haaland followed suit two weeks ago.

The Progress Pride flag includes a chevron with white, pink, light blue, brown, and black stripes in an arrow on the left to the traditional six-striped rainbow flag.

The flag’s designer, Daniel Quasar, crafted the flag in 2018 after being inspired by the intent of the Philadelphia Pride flag, adding the black and brown to represent Black and brown LGBTQ people once more, as well as the black that became the color used in response to the AIDS epidemic. The flag also included white, pink, and light blue to specifically represent the transgender flag.

Also on Friday, President Biden appointed Jessica Stern as the U.S. Special Envoy to Advance the Human Rights of LGBTQI+ Persons, a position created in the Obama administration and left vacant by the Trump administration. The envoy serves under the Bureau of Democracy, Human Rights and Labor within the State Department.

Abercrombie-Winstanley, a former Ambassador to Malta and a 30-year State Department veteran, is the first person to hold this official position, which was created when she was appointed to it in April.

“My own allyship began before I knew that I was going to be the mother of two gay children,” Abercrombie-Winstanley said at the flag raising ceremony. “Having my own experiences as a senior career diplomat, an African American woman, inside this institution has given me firsthand experience not only of the discrimination in the workplace and our ability, however, [but] has given me an experience of our ability to successfully combat it.”

She noted, “My legacy in this role is to lead the Secretary’s efforts to ensure we all feel valued and included, now and for generations to come.”

The news comes in the same week that the United States sponsored its first United Nations event regarding trans rights, according to ABC News. “This is a core human rights issue, and we believe the United States belongs at the forefront of the fight — speaking out, standing up for our values,” said Blinken.

For the first time, @StateDept and @glifaa raise the progress flag, a symbol of the diversity and intersectionality of LGBTQI+ persons and communities around the world, at our headquarters in DC for #PrideMonth. I’m truly honored to serve as Secretary during this historic moment. https://t.co/3yJivnbJXS