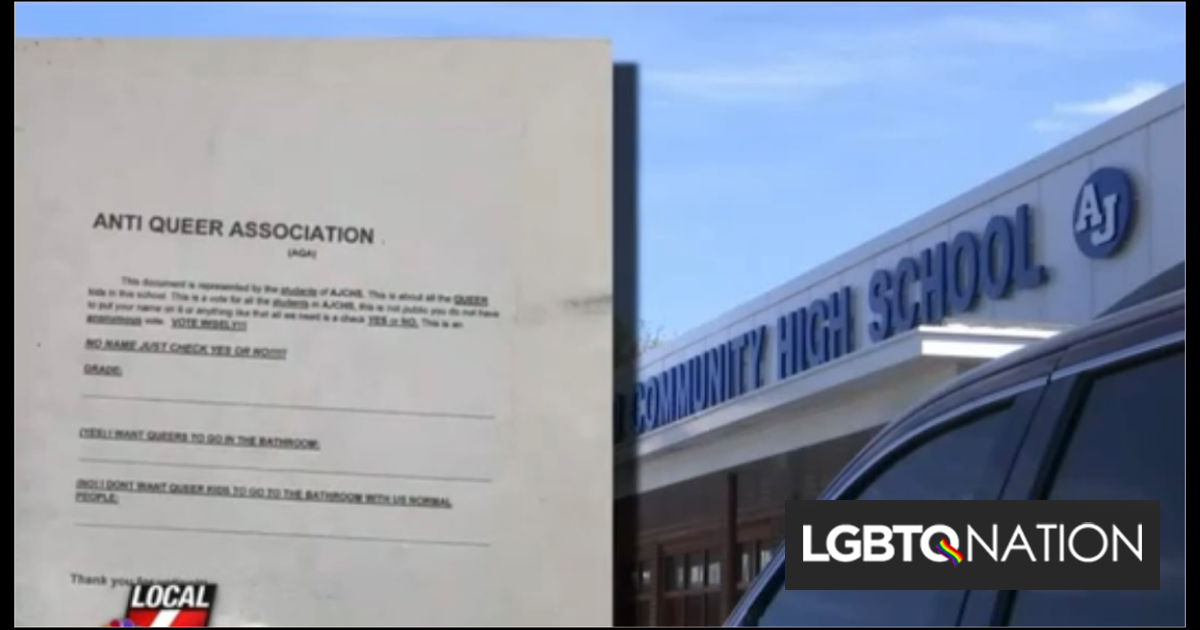 A small high school in southern Illinois is under intense scrutiny after the school community learned that a “survey” was being conducted around the school by a so-called “Anti Queer Association” of students, asking other students to anonymously answer whether or not they want “QUEER KIDS TO GO TO THE BATHROOM WITH US NORMAL PEOPLE.”

With the “Anti Queer Association” name as the header, the document that has circulated around Anna-Jonesboro Community High School reads, “This document is represented by the students of AJCHS. This is about all the QUEER Kids in this school. This is a vote for all the students of AJCHS, this is not public you do not have to put your name on it or anything like that all we need is a check YES or NO. This is an anonymous vote.  VOTE WISELY!!!”

Related: Illinois bill would allow anyone to sue someone who “causes an unintended pregnancy”

“NO NAME JUST CHECK YES OR NO!!!!!!” the “survey” continues, asking for the grade of the person filling it out.

“(YES) I WANT QUEERS TO GO IN THE BATHROOM;” the first line reads, and the next line reads, “(NO) I DON’T WANT QUEER KIDS TO GO TO THE BATHROOM WITH US NORMAL PEOPLE;” leaving space for the person filling it out to write their answer.

“Thank you for voting!!!” it concludes, without providing any further information or context for the “survey.” The school administration became aware of it on October 20, according to school superintendent Rob Wright, after the survey was shared across social media, including in a local Facebook group.

Rob Wright, the school superintendent, declined to provide any information or names stemming from the “survey.” He did pledge that an investigation is underway and said, “I can tell you that this type of harassment is taken very seriously and will not be tolerated. And once the investigation is complete, the appropriate discipline will take place where warranted.”

Michael Coleman, a member of the board of directors for the Rainbow Cafe LGBTQ Center in nearby Carbondale, Illinois, told WPSD 6 that “My understanding is that it was an association that was brought upon the students and a parent that’s cosigning for it that made the Anti-Queer Association, basically trying to repeal the Keep Youth/Children Safe [and Healthy] Act,” a law enacted in Illinois in August that will ensure sexual health education and LGBTQ-inclusive curriculum is implemented in the state.

Speaking to students attending Anna-Jonesboro, Coleman reported, “They really feel very unsafe in that environment in Anna-Jonesboro and that they felt that nothing was going to get done.”

After the Rainbow Cafe and other parents began speaking out, the survey became instant news. “By us taking that stand, that initiative, they really feel like it’s not going to happen anymore,” Coleman said.

This was circulated at Anna-Jonesboro Consolidated High School in Anna, Illinois, by a student. This child was taught to hate by unfit parents. pic.twitter.com/vWMRJJ2ERO

The Department of Justice holds that denying a student the right to use the bathroom in accordance with their gender identity violates Title IX of the Education Amendments of 1972. It’s not known if any student at Anna-Jonesboro has been denied the right or had that right challenged by the school or fellow students.

But based off of other trans students’ experiences around the country, “Being forced to access a restroom or locker room based on their gender assigned at birth as opposed to the gender of their true self sets off a spiral of issues,” Tara Bell of the Social Action for Southern Illinois group told the Southern.

The Southern also reports that Jacki Dent, a parent of an Anna-Jonesboro student, recorded a rant on Facebook complaining about the school following the law and allowing students to use bathroom according to their gender, reportedly saying she’s “about ready to pull the kids out of school.”

Illinois passed the Equitable Restrooms Act in 2019, requiring single-occupancy bathrooms to be deemed gender-neutral starting in 2020.

Coleman says that he would like for the people involved with the “Association” to come visit the Rainbow Cafe. “I like to tell people: If you don’t know something, learn it. Don’t spew hate about it because you don’t understand something.”

They will be hosting a virtual Safe Zone and Allyship Seminar on November 3.

Anna, Illinois and Jonesboro, Illinois are two commonly associated towns with mostly-white populations of about 4,100 and 1,700 respectively. While nearby Carbondale is known as “Little Egypt” and home to the Rainbow Cafe and Southern Illinois University, The town of Anna — and the Anna-Jonesboro school — was the subject of a profile reported by ProPublica Illinois examining the town’s prevailing legacy as a “sundown town,” where Black people were attacked or killed if they were in town after dark.

At the time of the story’s publication in 2019, all of Anna-Jonesboro’s staff was white. “I wish we had more diversity on our staff,” said Brett Detering, the school’s principal, told ProPublica at the time.

In 2015, a sophomore student on the football team was tied up and forced into a locker room shower in a publicized bullying incident that was taped on cell phones by other students. The school was criticized for not telling parents about the incident despite learning about it weeks before others did. Detering was principal and athletic director at the time.

Three students were expelled and at least one other student transferred to a “safe school” within the region, serving less than a dozen children at the time.

The survey comes from a group of students who call themselves “the Anti-Queer Association.”

Online, people expressed their disappointment and frustration about the homophobic survey. https://t.co/oZlVNDm2TH

@AJCHS81 I think the issue we are seeing with transphobia and homophobia amongst your student body and community is proof that we need to be putting grant $$ towards hiring a more diverse faculty and creating a curriculum that teaches tolerance.

As the mother of a gay son and a retired educator, this absolutely disgusts me. My mom was born in this town. If she were alive, she’d be spitting mad… https://t.co/q9d3EJ0u81

r ppl who aren’t from Anna-Jonesboro jus now realizing that in addition to a hefty amount of individuals in our town being racist, they also don’t like gay/trans ppl? this ain’t new, we’ve been living like this for ages!!

The hate is not acceptable but also very predictable