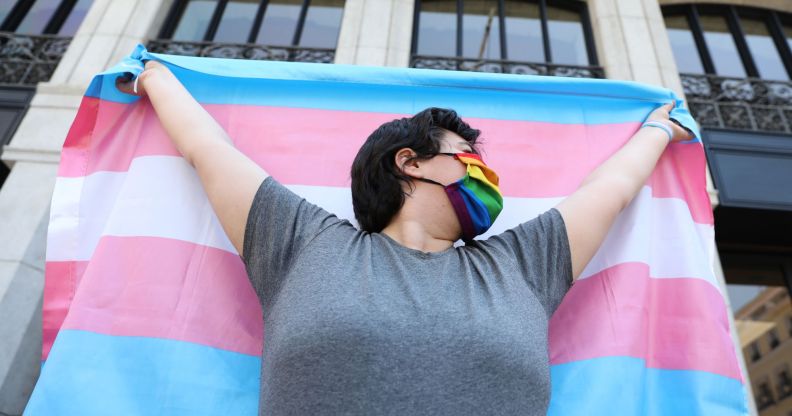 Spain has passed a trans rights bill allowing anyone aged 16 or over to update their legal gender marker without the need for hormones or surgery.
(Isabel Infantes/Getty Images)

Spain has approved a gender recognition bill which will make it easier for trans people to update their legal gender marker.

Approved by 188 votes to 150 with seven abstentions on Thursday (22 December), the bill will now move to the Senate, where, if unchanged as expected, it will become law within weeks.

The draft bill allows trans people in Spain over the age of 16 to update their gender maker and name on official documents based on a simple request.

It allows anyone from the age of 16 to apply, with those as young as 12 being able to do so under certain conditions.

The demand must be confirmed by the applicant three months after they submitted the request, for the change to become valid.

Montero has denounced opposition to the revolutionary law as “transphobia”, according to Spanish publication The Local.

As the law currently stands, trans people in Spain who wish to change their gender ID must have a medical report which includes evidence of gender dysphoria and hormonal treatment for two years.

Under the current law, minors need judicial authorisation to change the gender presented on their ID, something the new bill aims to change.

The latest bill also bans conversion therapies, promotes non-discrimination against LGBTQ+ people in the workplace, and aims to “advance the inclusion” of trans women in particular.

Since being adopted by the cabinet in June 2021, the bill has sparked tension between Spanish political party Podemos, the party who have progressed the law, and socialists on the left who have failed at attempting to change it.

Previously Spain’s equality minister, Montero, explained her support for the bill, saying that trans women pose no threat to women.

“No man needs to impersonate women to rape women, to sexually assault women,” she said after a right-wing MP questioned how self-ID would impact women-only spaces.

“Trans people do not put us (cis women) at risk,” she said in a now-viral video.

“It is wage inequality, women’s care burden, and sexist male aggressors that put us at risk.”

Self-ID is not the only progressive law that Spain has introduced in recent years, with massive fines proposed for anybody who is found promoting LGBTQ+ conversion therapy in the country, and an extension of free fertility treatment to queer women, single women, and trans and non-binary people proposed in November 2021.

The bill passed by 86 votes to 39 on Thursday (22 December), and means trans people in Scotland will soon be able to gain legal recognition without the need for a medical diagnosis.