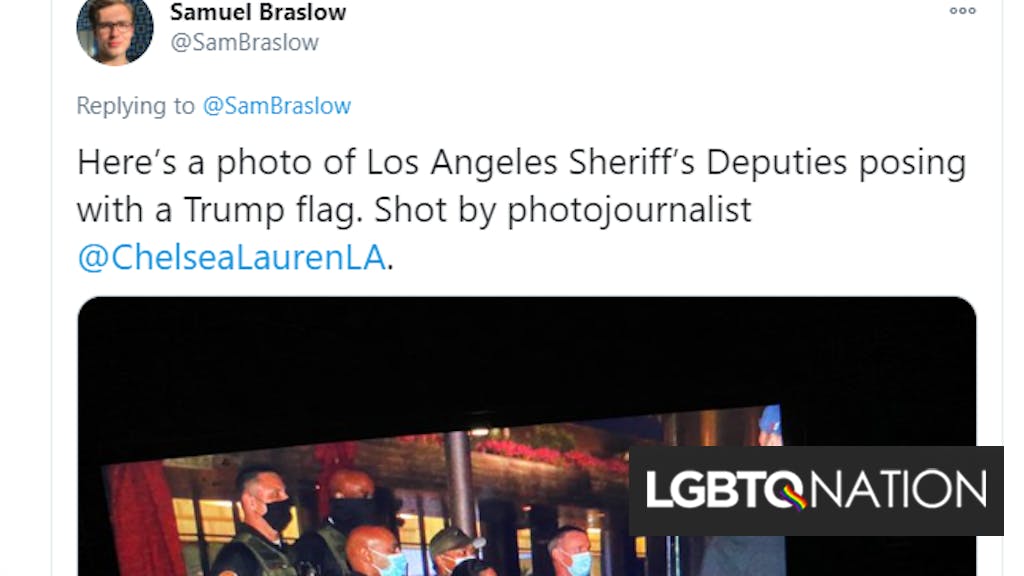 A few dozen people were in attendance, the accompanying “march” was limited to one block, and there were no one wearing masks based on footage or pictures – although there is currently a mandate by law to wear masks or facial coverings at gatherings within West Hollywood limits.

Law enforcement officers did not make any arrests or directives to put on facial coverings based on reports. In fact, several deputies from the Los Angeles Sheriff’s Department’s West Hollywood Station posed for photos with maskless attendees, even one where at least five officers stood behind a supporter holding a “Trump 2020” banner.

The deputies’ actions immediately sparked outrage, as people passing by stopped to question why on-duty officers were appearing to endorse a political agenda. Soon, the situation made it to social media where further criticism was displayed and amplified.

This picture taken is unacceptable and not in line with our values in West Hollywood!

They also did not order the crowd to disperse, as the Los Angeles County Department of Public Health prohibits public gatherings of more than 10 people, according to the Sheriff’s Department themselves.

One observer claimed to overhear officers say that at least the attendees weren’t like “those BLM terrorists,” referring to Black Lives Matter protestors.

One conservative attendee claimed that before the protest, deputies “told us to get loud and proud and that they were proud of us.”

Critics pointed out the stark differences in how the sheriff’s deputies patrolled the event, such as the lack of riot gear, and the comraderies they showed with attendees.

One of the photographers that witnessed and captured the rally, Chelsea Lauren, tweeted that “I’ve been to numerous rallies on both sides at this point, and I have to say that the difference in treatment during fully peaceful protests is drastic – to say the least.” Shepi Shyne, a candidate for West Hollywood’s City Council, replied that deputies’ actions were “not in line with our values in West Hollywood.”

As our sister site Queerty reported, the event popped up late in the week via social media, although the Log Cabin Republicans of Los Angeles listed no events on their website.

The gathering, planned as “Gays and Housewives Take Over WeHo”, was small but included prominent right-wing figures such as out activist Christian Walker, the son of Herschel Walker. The group chanted “Gays For Trump” among other things, carrying American, “Trump 2020”, and altered “Blue Lives Matter” flags.

Reports indicate somewhere between 40 to 70 people attended, and the “takeover” lasted between 30 minutes to an hour.

West Hollywood – a small, prominent area in Los Angeles County known as “WeHo” – is home to one of the most infamous gay villages in the country. Well-known for its anti-Trump electoral leadership, only 8% of registered voters are Republicans, according to WeHoVille.

The town’s former mayor Lindsey Horvath vocally expressed that the President is not welcome in the area and petitioned for the removal of Trump’s star on the Hollywood Walk of Fame, which is not within their jurisdiction. The current mayor, John Duran, was one of the city councilmembers to present pornstar/ex-Trump mistress Stormy Daniels with a key to the city.

“One of the organizers… stated that history was made that night,” WeHo Times reports, “when compared to a Gays for Trump rally that took place two years ago in West Hollywood. He said only five people showed up to that rally.”

No arrests were made, although the group interrupted those having dinner at a nearby restaurant and got into face-to-face arguments with patrons there. A car passing by began blaring “FDT”, an anti-Trump song by YG and Nipsey Hussle, much to attendee’s aggravation.

Lots of middle fingers and some booing. Christian Walker, one of the more prominent personalities here, does flips across the street. pic.twitter.com/wekUsgUT42