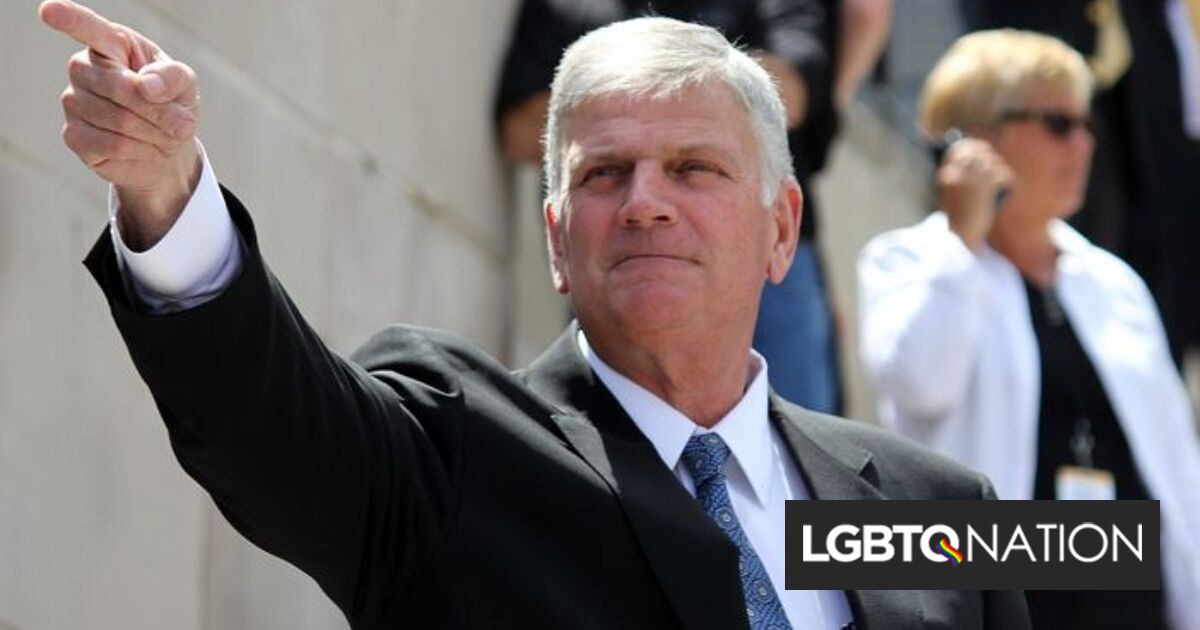 Evangelical leader Franklin Graham wanted to host a “law enforcement appreciation” event with officers in the Seattle Police Department and even said that he’s willing to “welcome” LGBTQ officers to the event.

But after stirring controversy in the city, the Seattle Police Department refused to go, saying it’s “committed to the equality of our community’s LGBTQ members.” Graham is forging ahead, now saying that he wanted “just to have dinner” and that he’s “a Christian, and I believe Jesus Christ is the Way.”

Graham is hosting the event through the Billy Graham Evangelistic Association, which he is CEO of and is named after his father. The avowed anti-LGBTQ organization was found to be promoting anti-LGBTQ ads on social media sites like Facebook just a few weeks ago.

When he announced the event in early April to be held on May 11 or May 12 at the Hyatt Regency hotel in the Seattle-adjacent city of Bellevue, the Seattle Police Department initially invited officers in the department in a mass email.

But Lorena Gonzalez, president of the Seattle City Council, called the invitation “absolutely a misuse of taxpayer resources” and said it was “alienating our own LGBTQ officers.”

Interim Seattle Police Chief Adrian Diaz then sent another email out, telling the department that “based on Graham’s history and affiliations, the email has raised concerns that the SPD may not be committed to the equity of our community’s LGBTQ members. I want to make clear the Department fully supports the equity and just treatment of all people.”

In response, Graham issued a statement: “I am a Christian, and I believe Jesus Christ is the Way… there are law enforcement professionals who represent other faiths and some who are of no faith. Regardless of their beliefs, sexual orientation, or the color of their skin, it doesn’t change in any way the fact that we are deeply grateful for the jobs they do and the sacrifices they make.”

He went on to say that “even though the email from Interim Seattle Police Chief Diaz announcing the event has been rescinded, our invitation and the dates still stand.” He was hoping smaller police departments nearby might attend.

The dinner is now planned for May 11 and Graham is still pushing on as planned.

“Come relax in this safe setting and enjoy a delightful meal, an uplifting message, encouraging and practical wisdom from God’s Word, live music, and fellowship with other law enforcement officers,” the event page reads.

In the radio appearance, Graham claimed, “I’m not anti-gay.” He said he’s “sorry” that council president Gonzalez “took this position, and hopefully, she’ll change her mind.”

He said that his organization is “inviting the police and their spouses… regardless of their religion or their sexual orientation or whatever. If you’re a police officer, you and your spouse are invited.”

Graham is the son of the 20th century’s most powerful evangelical, Billy Graham, the CEO of the Billy Graham Evangelistic Association, and the head of the nonprofit Samaritan’s Purse – where he draws a six-figure salary and bans LGBTQ people as volunteers.

Graham threw his support behind Donald Trump throughout his 2016 campaign and ascension to the Presidency, and most of the evangelical community followed suit.

In January, when it was clear that Trump wasn’t being reelected, he asked “God’s Army” to intervene in the runoff elections for the two U.S. Senate seats in Georgia because “if conservatives lose control of the Senate, there is nothing to stop the radical agenda of the left.”

“President Trump will go down in history as one of the great presidents of our nation, bringing peace and prosperity to millions,” Graham said in the beginning of December 2020, even claiming that Trump “brought back ‘Merry’s Christmas!’”

In October, he railed against the Pope for suggesting that same-sex couples “have a right to a family.”

“For Pope Francis to attempt to normalize homosexuality is to say that Holy Scriptures are false, that our sins really don’t matter, and that we can continue living in them…. No one has the right or the authority to trivialize Christ’s sacrifice on our behalf,” Graham wrote in response.

In June, he declared in response to Dr. Anthony Fauci’s comments on right-wing bias that “Science isn’t truth. God is.”

Earlier in 2020, the Samaritan’s Purse field hospital was closed by New York City after it turned away a gay man trying to volunteer. In May, Graham shrugged it off, saying “One thing is 100% certain—we will all die.”