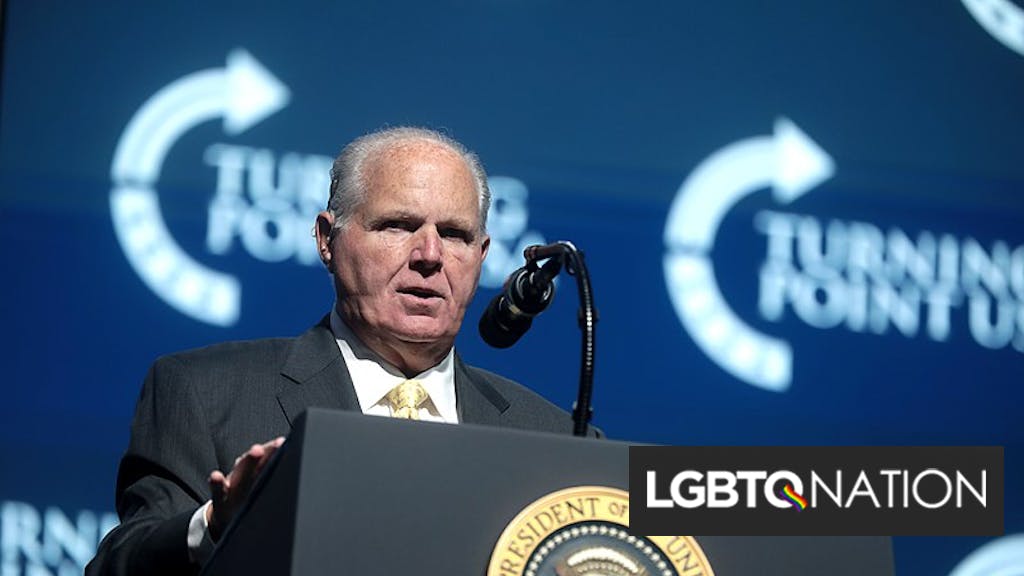 During a segment of his radio show on December 4, conservative pundit Rush Limbaugh had a message directly for “mainstream media.”

“Can I have the attention of mainstream media, this is a pull quote,” Limbaugh said, “you’re going to love this quote from me…. as a conservative, it’s getting harder and harder to not look like a kook.”

Immediately after, the radio host claimed he was “just kidding” and continued, attempting to clarify, that “it’s impossible to keep up” with “all of this stuff” that’s out there in right-wing circles.

“…there are so many theories, and all of them have a trace of validity to them,” he explained.

Limbaugh then blamed “the left” for pointing out the parts of conservative claims that don’t have validity to them, saying they’re “doing everything it can to make every one of them appear to be right out of Kookville.”

The left ‘knows’ that “mainstream Republicans don’t want anything to do with kooks, racism, bigotry, homophobia, whatever,” he claimed after spending the last year mocking Pete Buttigieg and his husband, Chasten, several times.

In Limbaugh’s view, people writing off conspiracy theory claims of election fraud as “just Kook City… just Kookville,” are succeeding because “by the way, mainstream Republicans have a patent on staying silent.”

“I think the attempt to call these people kooks, is almost as effective as calling them racists,” he alleged. He then continued on to criticize the same “mainstream media” for refusing to air President Donald Trump’s speeches (and for “ripping it to shreds” when they do cover them), along with his claims of election fraud.

“This is one of their techniques here, is to chalk all of this stuff up to kookism,” Limbaugh contends, noting that “Trump doesn’t care,” but that he “needs to be the guiding light of influence on this” in order to succeed in his last-ditch effort to stay in office. He further said that Trump and the right are “running out of time,” as the Electoral College meets on December 14 to formally cast votes on behalf of the states for President.

Limbaugh said that in order to save Trump’s Presidency, judges will have to “throw out the vote and order recounts,” or states will have to “select new electors” who will ignore the counts they’re sworn to represent and support Trump. Neither has happened as of yet, despite Trump’s attacks on Republicans who aren’t helping him enough.

“Time is of the essence here for Trump to do whatever it is he’s going to do,” he pleaded.

His attacks on out Presidential candidate Pete Buttigieg – such as mispronouncing his last name as “booty judge,” emphasizing repeatedly that Buttigieg kisses his husband Chasten, questioning how people could explain their relationship “to your kids,” and that “Mr. Man Donald Trump” will “have fun with that” in presidential debates — were the highlights of Limbaugh’s year. He also read on-air multiple articles from right-wing websites that alleged Kamala Harris “slept her way up” to becoming a U.S. Senator and eventual Vice President-elect.

In January, the 69-year old announced he had been diagnosed with lung cancer, which was in the “advanced” stages. Guest hosts while he was away for medical reasons included Mark Steyn, who questioned if Buttigieg was even gay, if other Presidential candidate Elizabeth Warren was a woman, and determined Taiwanese businessman Andrew Yang “doesn’t count” as a person of color. Steyn also said while filling in for Limbaugh in March that San Francisco was the first to initiate a stay-at-home order in response to coronavirus because “they’ve got all the gay guys there.”

Following his diagnosis, Trump awarded Limbaugh the Presidential Medal of Freedom during this year’s State of the Union address.