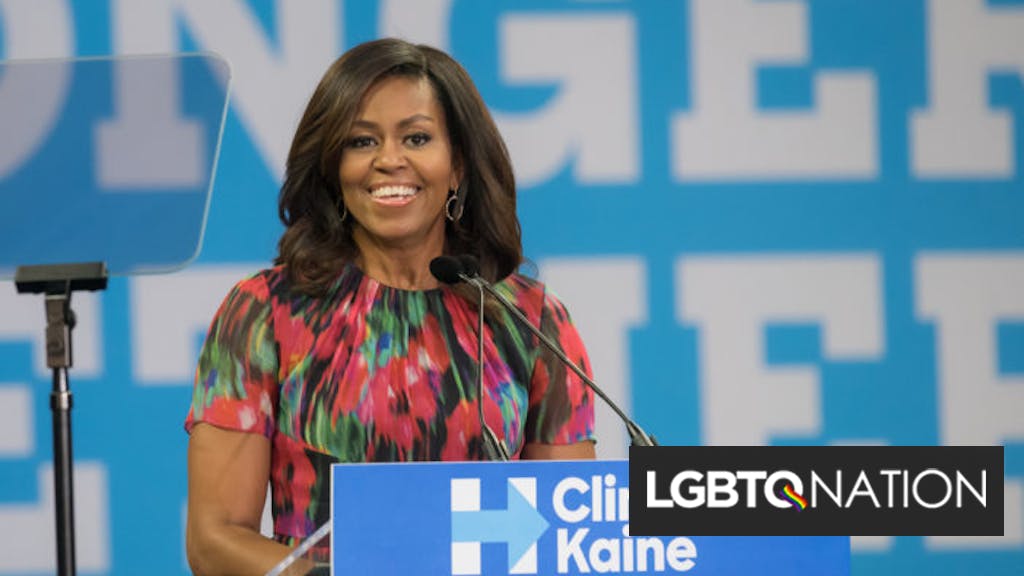 Rightwing pundits are now saying that Michelle Obama is a transgender woman.

Republican candidate and QAnon conspiracy theorist DeAnna Lorraine was on Alex Jones’s InfoWars last night where she made bizarre comments about the former first lady.

Lorraine and Jones repeatedly referred to Michelle Obama as “Big Mike” on the show, and Jones said he doesn’t know “what’s really going on with her.”

Jones reminded Lorraine that he has a “family audience” and then said: “There’s videos of her where it looks like she has a flaccid, eight-inch rubber snake in her pants.”

The show then played a video of Michelle Obama walking out of a building.

“A flaccid one too,” Lorraine said.

“I mean seriously,” Jones said. “She’s adjusting it, it’s flopping around. And the word is, you know, she’s pitching and he’s catching.”

“I’m not trying to be gross here,” Jones stressed.

He went on to say that Barack Obama was born “to a famous Communist pornographer, his mother shot videos with him, it’s all confirmed.”

None of this is true, much less confirmed.

Taking a step back, Jones saw what might be the bigger picture. “[Michelle Obama] might have put a rubber snake in her pants at all these things to mess with us. Does that make sense? Because they run psy ops.”

Lorraine, not keeping up, mixed up the conspiracy theories.

“Wouldn’t that be the biggest psy op ever perpetuated, to have a woman as a first lady who is actually a man who is a transgender?” she said. “Because they do stuff like that all the time.”

Jones has a long history of anti-LGBTQ comments, usually attacking queer and trans women and portraying them as overly masculine and saying that famous women like Hillary Clinton are secretly lesbian. He has been banned from several social media platforms, including YouTube and Twitter, for his conspiracy theories.

Lorraine ran in a primary earlier this year as a Republican against House Speaker Nancy Pelosi (D-CA). California uses a top-two primary system where Republicans and Democrats run against one another) and lost.

She was back in the news this week after making a racist joke on Twitter about George Floyd, an unarmed Black man who was killed earlier this year when white Minneapolis police officer Derek Chauvin kneeled on his neck for almost eight minutes, even after he stopped breathing.

Lorraine said that Floyd’s family spoke at the Democratic National Convention because someone gave them “free meth.” They actually spoke at the convention to lead a moment of silence for Black people who lost their lives to institutionalized racism and police brutality.