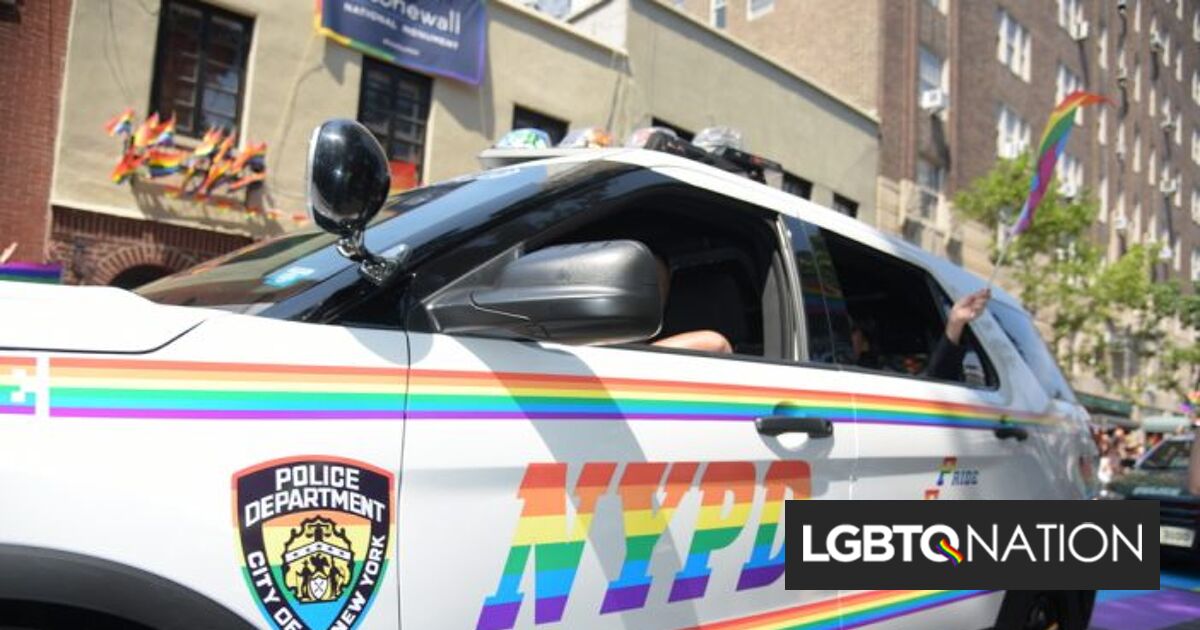 The Gay Officers’ Action League (GOAL) revealed that Heritage of Pride (HOP), the organization that is the organizer of the New York City Pride festivities, has banned official law enforcement participation in their events.

Related: Trans & queer New Yorkers faced brutal use of force by police near Stonewall. The mayor “doesn’t know anything.”

In a statement released this morning, HOP stated to LGBTQ Nation via email, “effective immediately, NYC Pride will ban corrections and law enforcement exhibitors at NYC Pride events until 2025. At that time their participation will be reviewed by the Community Relations and Diversity, Accessibility, and Inclusion committees, as well as the Executive Board.”

They stated, “in the meantime, NYC Pride will transition to providing increased community-based security and first responders, while simultaneously taking steps to reduce NYPD presence at events.”

Still, because the NYPD is responsible for issuing certain permits, the department and organizers will maintain some form of working relationship, albeit a less friendly one.

“This announcement follows many months of conversation and discussion with key stakeholders in the community,” Pride co-chair André Thomas said. He credited the Anti-Violence Project, National Black Justice Coalition, and other advocates for giving HOP the guidance to make the decision possible.

The GOAL chapter for New York, representing LGBTQ officers in the NYPD, put out a statement on the matter ahead of HOP on May 14, expressing that they were “disheartened by the decision to ban our group from participating in New York City Pride.”

GOAL cites changes in NYPD policies in recent years as evidence of their advocacy, taking credit for having “had our hands in every police reform and policy revision touching on the LGBTQIA+ community in New York City.”

According to the New York Daily News, Heritage of Pride was going to publicly announce their decision next week, but GOAL decided to preempt them.

GOAL president Brian Downey suggested that police will participate anyway, stating, “Heritage of Pride is well aware that the city would not allow a large scale event to occur without police presence.”

Seemingly preparing for that, HOP stated that they expect the NYPD to “provide first response and security only when absolutely necessary as mandated by city officials.” Outside of that, Pride organizers will “take steps” to keep officers from the department’s supervising precinct “at least one city block away from event perimeter areas where possible.”

NYC Pride announces new policies to address the presence of law enforcement and NYPD at Pride events in New York. The steps being taken challenge law enforcement to acknowledge their harm and to correct course moving forward, in hopes of making an impactful change. pic.twitter.com/DAVtJBtCSR

In the meantime, NYC Pride will transition to providing increased community-based security and first responders, while simultaneously taking steps to reduce NYPD presence at events.

Downey claimed that the NYC Pride organizers’ ban on groups representing law enforcement or corrections employees will begin next year, and also extended to all GOAL chapters around the world. Pride organizers said that the ban is immediate, although their actual official Pride march this year is going to be virtual.

Downey further derided organizers for taking “the low road,” saying that the decision is “preventing their fellow community members from celebrating their identities and honoring the shared legacy of the Stonewall Riots.”

He further stated that “it is demoralizing that Heritage of Pride didn’t have the courage to refer to GOAL by name in its announcement,” calling their blanket term “Law Enforcement Exhibitors” a label “that is not only offensive but dehumanizing for our members.”

The Stonewall Riots of 1969 started early in the morning on June 28, 1969, when NYPD officers raided the Stonewall Inn bar for serving alcohol to gay people. Patrons stood up against the police and kicked off three days of unrest. This moment helped crystallize the modern LGBTQ rights movement, and led to what we now call “Pride Month.”

Only after pressure and a declaration from NYC Pride organizers did the NYPD officially apologize in 2019 for the raid and actions the department took against LGBTQ people that night.

As it was last year, this year’s annual Pride march in Manhattan will be held virtually out of precaution for the ongoing COVID-19 pandemic, and comes on June 27. Some other events planned by the organization will be held in person.

For the last two years, “Reclaim Pride” has been a counter-event organized by the Reclaim Pride Coalition to hold a Pride celebration that doesn’t feature police, corporate, or politician involvement. The coalition recently announced that they will hold their third annual rally on the same day as HOP’s virtual event, marching in-person from Bryant Park in midtown Manhattan to Battery Park at the southern end of the borough.

At last year’s Reclaim Pride march, which protested police brutality in the wake of George Floyd’s death, marchers were pepper sprayed and attacked with batons by NYPD officers allegedly covering their badge numbers.

In a statement to the New York Times, a NYPD spokesperson said that “the idea of officers being excluded is disheartening and runs counter to our shared values of inclusion and tolerance.

“That said, we’ll still be there to ensure traffic safety and good order during this huge, complex event.”