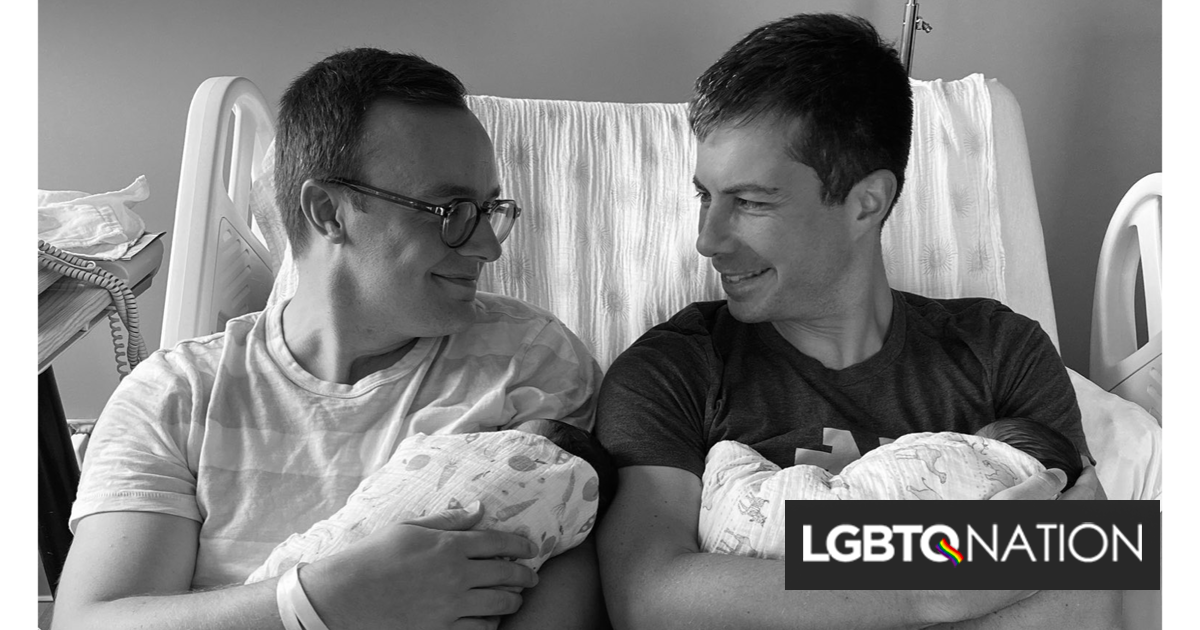 Out Secretary of Transportation Pete Buttigieg and his husband Chasten have announced the birth of their two children.

They made the announcement, including revealing their children’s names, with social media posts. The Buttigieg family shared a black and white photo of Pete and Chasten each holding one of their children, as the proud parents look lovingly at one another.

Pete and Chasten “are beyond thankful for all the kind wishes since first sharing the news that we’re becoming parents. We are delighted to welcome Penelope Rose and Joseph August Buttigieg to our family,” the family announced in dual social media posts.

Details of Penelope and Joseph’s birth have yet to be publicly shared, but it’s believed they are twins. Joseph is also likely named after Pete’s father, literary scholar and professor Joseph Anthony Buttigieg II.

Chasten and I are beyond thankful for all the kind wishes since first sharing the news that we’re becoming parents. We are delighted to welcome Penelope Rose and Joseph August Buttigieg to our family. pic.twitter.com/kS89gb11Ax

“For some time, Chasten and I have wanted to grow our family,” Pete posted on Twitter on August 17. “We’re overjoyed to share that we’ve become parents! The process isn’t done yet and we’re thankful for the love, support, and respect for our privacy that has been offered to us. We can’t wait to share more soon.”

Anti-LGBTQ people and Republicans have shamelessly attacked the couple for not having children before, but now they’ll have to find another reason to try and attack them.

The couple has been talking publicly about wanting to have kids since early 2020. Even earlier in their relationship, well before they were married, they were already talking about wanting kids, according to Chasten’s memoir I Have Something to Tell You.

And a recent profile in the Washington Post says that they’ve been having trouble adopting in the past few years. For example, two weeks ago they were notified of a birth mother who wanted to put her child up for adoption. Chasten and Pete dropped everything to travel to her state when they got the call. but then she changed her mind.

“It’s a really weird cycle of anger and frustration and hope,” Chasten said. “You think it’s finally happening and you get so excited, and then it’s gone.”

He said he wants to tell his kids one day: “We tried so hard for you. We waited so long for you.”

Congratulations and welcomes are already pouring in from around the world. Chasten and Pete are both trending worldwide on Twitter.