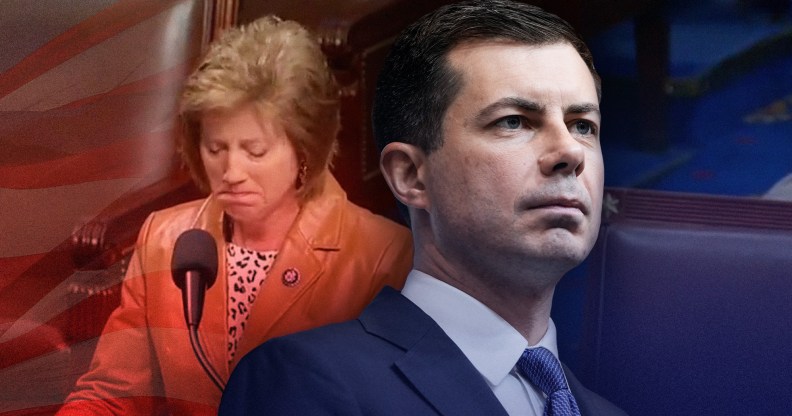 Pete Buttigieg pleaded for Vicky Hartzler to take a look at the families she was denying rights to. (Getty)

Democratic politician Pete Buttigieg has criticised a congresswoman who cried while urging representatives to deny gay people a legal right to marriage.

The gay transport secretary had plenty to say after Missouri representative Vicky Hartzler was seemingly reduced to tears at the very notion of gay people having basic human rights.

Speaking to CNN, Buttigieg said he wished Hartzler could read the heartfelt Medium post his husband wrote on 29 November where he spoke of their family life, adding that time with family is “the most important experience in my day”.

“The love and the institutional support… binds me and Chasten together.

“Including through hard times and, you know, a tug of war over who’s going to do the dishes when we’re both exhausted.”

The Democrat’s husband wrote the post in anticipation of the final House vote on the Respect for Marriage act, where Hartzler cried for her so-called “religious liberties” to deny gay people their right to marriage.

In his blog post, Chasten described how the little suburban intricacies like household chores, along with the wonderfully poetic moments of family time, are what defines marriage for him.

He wrote that mornings spent “negotiating the daily schedule” or “stuffing diaper bags” remind him of the rights he is deserved, as a gay married man and a human being.

“I know how precious this union is and how sacred and fragile our unions can be in the eyes of our ever-changing democracy,” Chasten wrote.

“We are not yet afforded the pleasure of letting our shoulders down, of taking a breath.

“We are fully aware that some desperately want to take this away.”

Missouri Republican representative Vicky Hartzler is just one of those people.

Her routine votes against bills expanding LGBTQ+ rights – and mental health support bills – as well as the anecdotes of family members and those close to her, have proved she, on some level, believes that LGBTQ+ people are lesser than their straight, cisgender counterparts.

Members of Hartzler’s family have distanced themselves from her because of these views, publicly denouncing her emotionally repugnant response to love she does not understand.

Andrew Hartzler dug into his aunt’s speech in a TikTok post on 9 December where he said that, despite him coming out as gay, his aunt was “just as much of a homophobe”.

“You want the power to force your religious beliefs onto everyone else and because you don’t have that power, you feel like you’re being silenced,” he said. “But you’re not.”

“You’re just going to have to learn to coexist with the rest of us.”