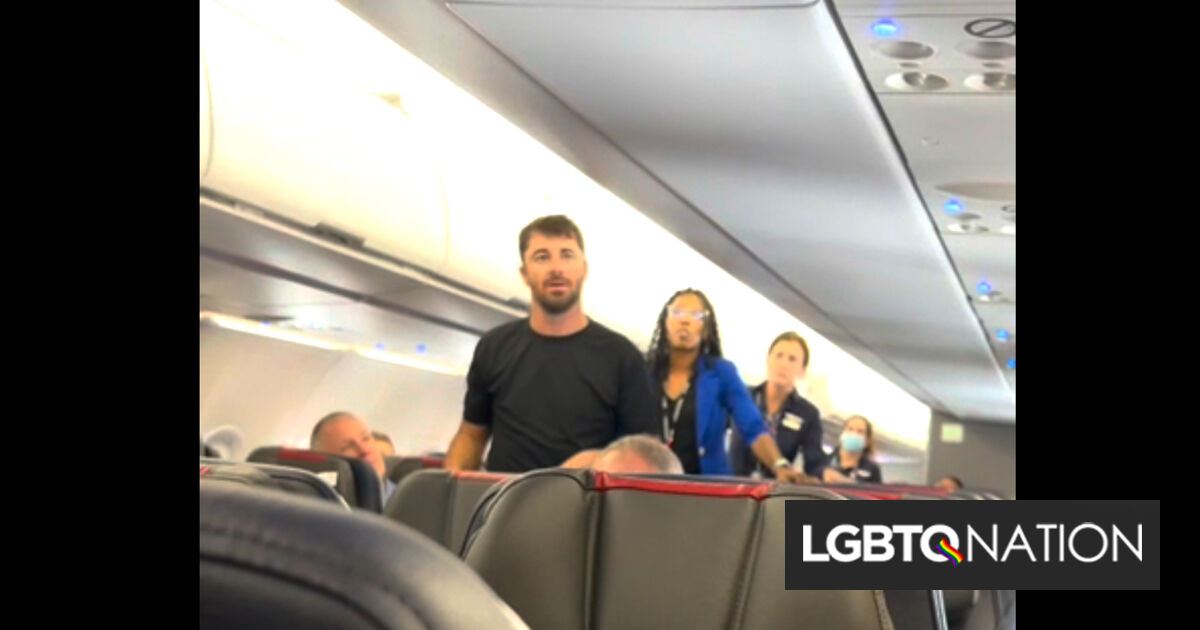 A video showing a passenger lobbing homophobic slurs at flight attendants and fellow passengers as he is kicked off an American Airlines flight has gone viral.

The clip, posted earlier this week to Reddit’s “r/americanairlines” subreddit, shows the man, who identified himself as an employee of GlaxoSmithKline, angrily ranting as flight attendants tried to help him find his carry-on bag and escort him off the plane. He also admits to being “intoxicated.”

The passenger who recorded the video and posted it to Reddit claims that the man was kicked off the flight from Philadelphia to Dallas for being “inappropriate towards the woman in the seat next to him.”

According to the witness, the man repeatedly directed racial slurs at the flight attendants before they began recording.

“I hope all you liberal fa***ts f**kin’ crash the f**kin’ plane, you fa***ts,” the man shouts at passengers as he’s escorted off the plane.

A disgusting homophobe gets kicked off his flight from Philadelphia for harassing the person seated beside him. The man has a huge meltdown on the way out bragging about his job at GlaxoSmithKline as a chemical engineer… Probably not for long sir. pic.twitter.com/NVir4Oj4Hn

The clip made its way to Twitter, where one commenter praised the poise and professionalism of the flight attendants.

@AmericanAir is this your plane and crew? The professionalism displayed by these strong women deserves to be acknowledged. The queen dealing with him directly inspired a sense of security and safety. I look forward to my flight w you next month.

Another, claiming to be a GlaxoSmithKline employee as well, said that he planned to “look into it.” On Thursday he added that the “situation had already resolved itself” at the company. In the video, the man claimed that he planned to quit his job as a chemical engineer at the pharmaceutical and biotechnology company.

A statement sent to LGBTQ Nation confirmed the man had been terminated by the company.

“On Wednesday evening, GSK was notified of an incident involving an employee on a flight to Dallas,” a spokesperson wrote. “We immediately conducted an investigation and as of Thursday, he is no longer employed at GSK. The person’s remarks were reprehensible and do not reflect our company culture. At GSK, diversity, equity and inclusion is embraced and celebrated and we are committed in policy, principle and practice to maintaining an environment which prohibits discriminatory behavior and provides equal opportunity for all persons.”

I’m also a chemical engineer at GSK but don’t recognize this guy. I will look into it though.

The situation had already resolved itself, apparently. Don’t know anymore than that and I’m not going to ask.

He is no longer an employee of GSK.

On Wednesday, GSK was notified of an incident involving an employee on a flight to Dallas. We immediately conducted an investigation and as of Thursday, he is no longer employed at GSK. The person’s behavior was reprehensible and does not reflect our company culture.