Officers attempt to storm a gay café to seize “f*ck the police” merch. It backfires. 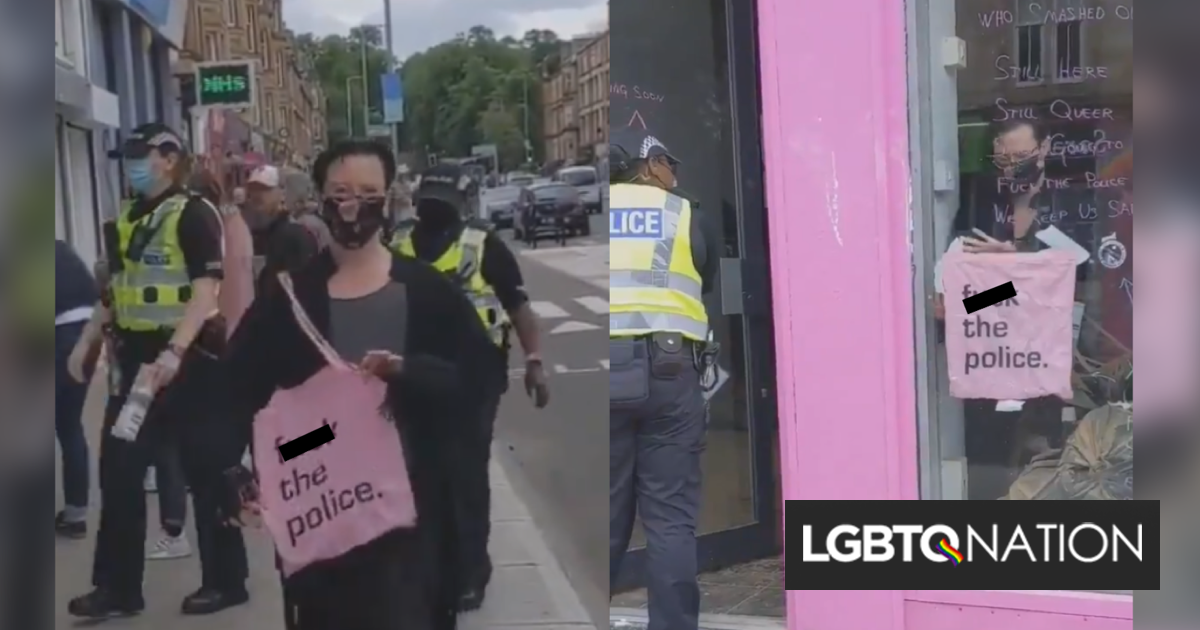 Owners of a yet-to-be opened café have gone viral after they were accused of “breach of the peace” because they hung a tote bag on their storefront window that read “fuck the police.”

Police, claiming they were heeding complaints from neighbors, attempted to enter the store and take down the bag. One owner asked them to wait outside, and took it down himself. After, they gave police that bag, but then put up an identical, but separate, bag with the same message.

Related: 4 LGBTQ staffers fired from brewpub seeking “a change in culture.” Guess what they meant.

The Pink Peacock is “a queer, yiddish, anarchist vegan community café opening in the southside of Glasgow” in Scotland that will operate on a “pay-what-you-can” structure once it opens its physical location. Their online store already operates on this structure as well, including the sale of the tote bag at a suggested retail price of 10 pounds, or $14.

The café operates on a cooperative basis, being “governed exclusively by its workers and community members.” Although there’s no hierarchical structure, Morgan Holleb, who is bisexual and non-binary, and Joe Isaac, who is also bisexual, co-founded the Pink Peacock. It will operate on a bilingual basis as a vegan Jewish bakery, with an alcohol-free, late night café service “that is centered around queer people.”

They pledge that “everyone [is] welcome (except cops and TERFs.)”

On June 14, Isaac and Holleb were in the still-unfinished business watching television when police came by and said their pink tote bag reading “fuck the police” and displaying in the window needed to be taken down.

“I’m gonna caution a charge of breach of the peace,” the officers said according to Vashti, “I’m gonna charge you, but before I charge you, I’m going to caution you.” They then presented Isaac and Holleb with an “Incident reported” card.

“What they were really doing was… trying to intimidate us,” Holleb said.

Despite not trying to take the bag then, officers returned in just a few minutes and then demanded they take the bag into evidence.

Holleb decided, “Okay, we’ll make a spectacle out of it then.”

In video shared by the Pink Peacock online, Holleb did exactly that. He gave the bag on display in the window to police, but then took the bag he was carrying and not only hung it back up — but duct-taped it.

update: they came back to seize the tote bag in the window for “evidence”, so we filmed it

After seeing he was putting it back up, officers challenged Holleb in inaudible text.

So he took the bag down — just to reverse it, leaving the other side of the bag, which is in Yiddish, visible.

The Yiddish writing reads “daloy politsey” — a slogan known as “down with the police.” He then signed an evidence bag affirming that he provided the bag as requested to police.

While the officers stood in the doorway, he also took out a marker and wrote clearly on the door’s glass, “fuck the police.” Both the phrase and bag remain in the window today.

Isaac and Holleb would only find out the next day that they were in fact being charged, not cautioned, via the local news. British media has heavily maligned Pink Peacock, but Holleb said that beyond one person who tried to paint over their windows this week, they have not faced anywhere near the issues they expected, even since the viral video.

“It really feels like we’ve got the community on our side,” Holleb told Vashti.

last night an avid sun reader painted over our window, but was stopped by some lovely comrades who caught him on camera and “took his paint off him and wacked him with his own roller”

According to Holleb, only one woman ever vocalized complaints about the bag’s message, and after talking with her amicably, “She accepted that we weren’t just being contrarians” and left without incident.

Yet, Scotland Police stated that they “Received complaints from the public regarding an item displaying offensive language.” They reported that they charged someone “in connection with a breach of the peace,” although they misgendered Holleb in their statement if that was the person they referred to.

Police also claimed that “the item has been removed from the premises,” which appears to be true. Just not all of Pink Peacock’s items.

The tote bags sold by Pink Peacock are currently sold out, although they pledge they will be restocked, and the store has received over 3,200 pounds, or north of $4,400, in donations and purchases.

our FUCK THE POLICE tote bag and BE GAY DO CRMES pins are out of stock, but you can still backorder them

the totes are in production now and get to you in about 1 month; we’ll announce a time frame for the pins as soon as we hear from the manufacturer 🖤https://t.co/2hHGrCOoLe pic.twitter.com/Suz9PBAeU3