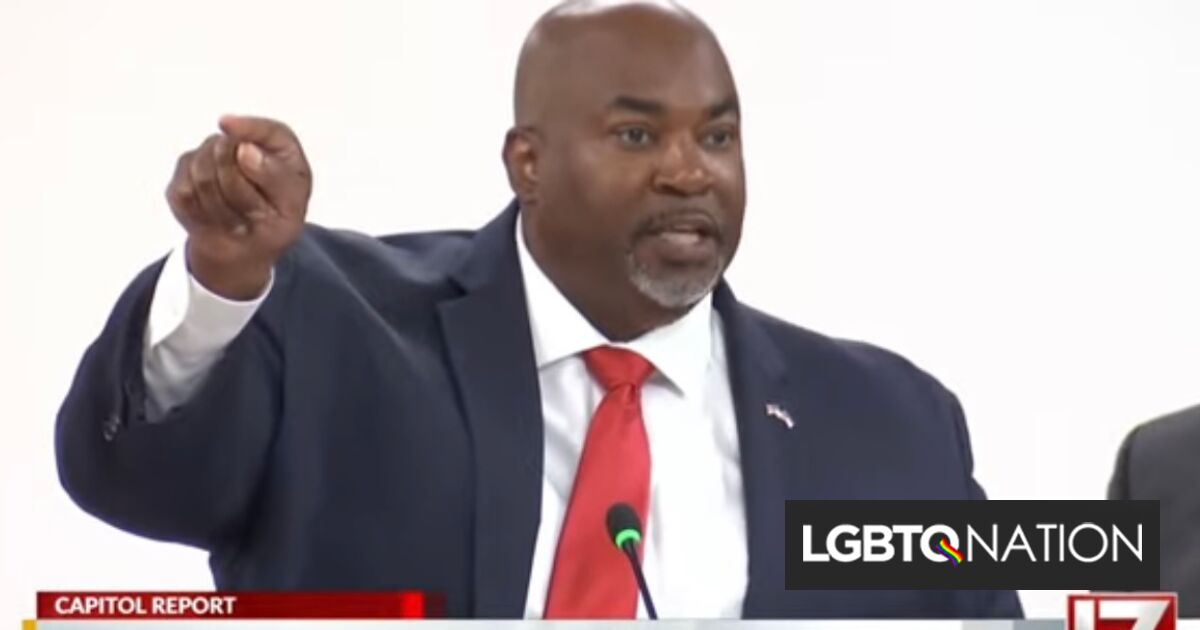 North Carolina Lt. Governor Mark Robinson (R) is refusing to heed mounting calls for him to resign after he declared that homosexuality and “transgenderism” is “filth.”

Robinson delivered the remarks in June at the Asbury Baptist Church in Seagrove, NC. The remarks were recorded and released online, first obtained by Right Wing Watch.

“I’m saying this now, and I’ve been saying it, and I don’t care who likes it: Those issues have no place in a school. There’s no reason anybody anywhere in America should be telling any child about transgenderism, homosexuality — any of that filth,” Robinson said, “and yes, I called it filth. And if you don’t like it that I called it filth, come see me and I’ll explain it to you.”

State Sens. Jeff Jackson (D) and Wiley Nickel (D) have called for him to resign. The White House said his remarks were “repugnant and offensive.”

North Carolina Lt. Gov. Mark Robinson says Christians must take control of public schools because children are being abused by being taught “filth”: “There’s no reason anybody anywhere in America should be telling any child about transgenderism, homosexuality, any of that filth.” pic.twitter.com/aXjCPFKTs0

Cooper said in a statement released by a spokesperson, “North Carolina is a welcoming state where we value public education and the diversity of our people. It’s abhorrent to hear anyone, and especially an elected official, use hateful rhetoric that hurts people and our state’s reputation.”

Still, Robinson has made clear that Cooper’s thoughts “made no difference whatsoever” and he will not heed calls to step down. Robinson’s office released a statement trying to quell the controversy, saying that Robinson “affirms every individual’s constitutional right to identify or express themselves in anyway they desire.”

But Robinson continues to make statements of his own, effectively erasing the damage control his office is doing. He said he does not intend to resign, but in fact he wants to “double down” on his efforts against LGBTQ people. Robinson claimed in subsequent comments that his remarks were okay because being gay or trans is “against the tenets of my religion.”

“I am tired of folks on the right being demonized for our speech,” he claimed, while “folks on the left burn, beat, rob, loot — take over entire cities — and get a pass.”

He continued, saying, “The language I used, I am not ashamed of it. I will use it in the future because, again, it is time for parents in this state to take a strong stand for their children.”

Still, he tries to claim that he’s not bigoted, and that he’s “sorry” for LGBTQ people — but only because “they feel contrary to the way I feel in a spiritual aspect.”

He further told Spectrum Local News on Thursday, “It doesn’t matter to me what the definition of hate speech is. I said what I said, and I believe what I said. Many people across the state feel the same way.”

Robinson is known for his anti-LGBTQ posts on Facebook. He has previously proclaimed that being gay is a step before pedophilia, that Michelle Obama is secretly a trans woman, and referred to trans-affirming people as “devil worshipping child molesters.” He also condemned gay people as an “abominable sin” in response to the 2016 Pulse massacre.

Earlier this year, Robinson released reports from a task force he formed to investigate the “indoctrination” of children in state public schools. The problem is, many of the issues Robinson claims he’s heard about endlessly weren’t in the report.

Robinson specifically used a trans-inclusive book as an example in his report that teachers have been supposedly “abusing” children with. When a Democrat state representative questioned him about the report and said it seemed to be “Fox News-driven,” Robinson got so offended that he walked out the room.

It’s unclear if or when opponents of Robinson will seek impeachment proceedings against the Lt. Governor, who is in office until 2023 otherwise. The North Carolina House would have to adopt articles of impeachment, and after a trial, two-thirds of the North Carolina Senate would need to vote for impeachment for it to be adopted, similar to impeachment on the federal level.

Republicans have slight majorities in both chambers.