Mormon students light up BYU sign in rainbow colors to support equality. The school may expel them. 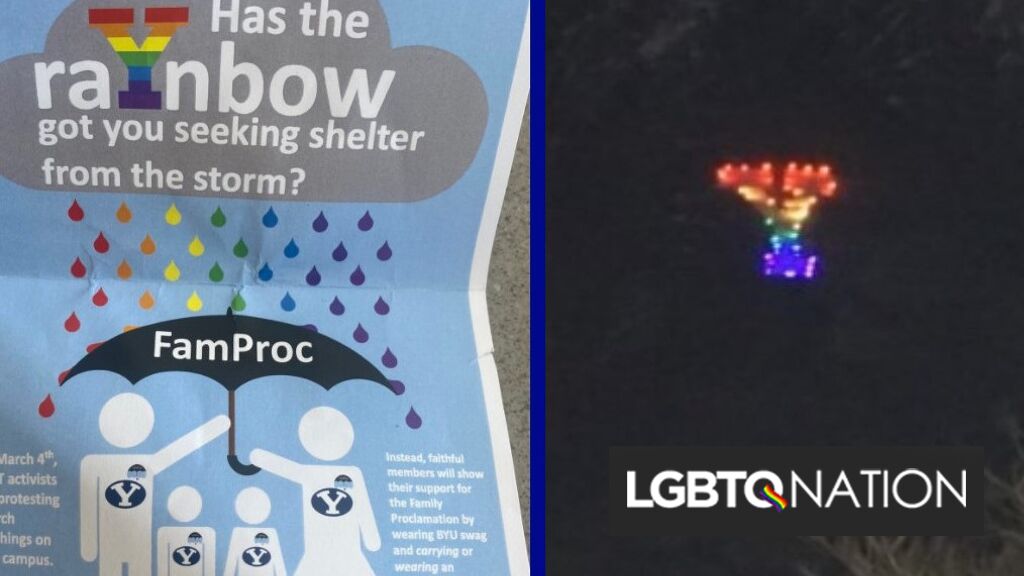 Student activists at Brigham Young University – a Mormon school in Utah – lit up the “Y” in the school’s giant hillside sign in rainbow colors in support of LGBTQ rights.

The school has denounced the display and said it violated their policies.

Related: Students say they were tricked into coming out by their anti-gay school

The Provo, Utah school is often listed as one of the most anti-LGBTQ campuses in the U.S. and bans “same-sex romantic behavior.” So yesterday some students decided to organize a “Rainbow Day” to show their support for LGBTQ students.

“Wear Rainbow on #RainbowDay to show love and support for LGBTQ+ students and faculty at all [Church Educational System] schools,” the students wrote in a social media post to promote the demonstration.

One student took it a step further and put a rainbow on the hill near the school that usually has giant, white “BYU” letters on it.

“We’re here,” gay BYU student organizer Bradley Talbot told the Salt Lake Tribune. “And we’re part of this institution. We should have a place at the Y.”

Just before 8 p.m. last night, students positioned around the Y shined lights in different colors, forming a rainbow. They held their lights for an hour and left at 9 p.m.

According to local media reports, police cars were waiting for them at the trailhead but no one was questioned by officers. Some people driving by played Katy Perry’s “I Kissed a Girl” and Lady Gaga’s “Born This Way.”

And the school was not amused.

“BYU did not authorize the lighting of the Y tonight,” at tweet on the university’s account reads. “The Y is BYU property and any form of public expression on university property requires prior approval.”

Students who participated in the demonstrations are now worried about potential backlash at the school. Those who are talking to local media are only using first names because they could be expelled.

“BYU is a hard place for queer kids to feel love and accepted,” said Allison, a student who identifies with the LGBTQ.

In the days leading up to Rainbow Day, anti-LGBTQ students put up flyers around campus telling them to wear “BYU swag” or to carry an umbrella to show their opposition to LGBTQ people.

The flyers showed a rainbow-colored rainstorm pouring on monochromatic white stick figures representing a heterosexual couple and their children.

“Has the raYnbow got you seeking shelter from the storm?” the flyer asked.

The school later distanced itself from the flyers and said that they were taken down.

“The flyers were not approved and since have been and will be taken down,” a spokesperson told The Daily Universe, BYU’s student publication.

Last year, some students thought that the school’s anti-LGBTQ policies were over when a reference to “homosexual behavior” was removed from the school’s honor code. Some LGBTQ students celebrated by posting pictures of them kissing on campus.

But the excitement didn’t last long, as BYU quickly tweeted: “In speaking with Honor Code Office Director Kevin Utt this afternoon, we’ve learned there may have been some miscommunication as to what the Honor Code changes mean. Even though we have removed the more prescriptive language, the principles of the Honor Code remain the same.”

The school stated that since “same-sex romantic behavior” goes against the teachings of the Church of Latter-Day Saints, it is still against the honor code.

“That day felt like a betrayal for a lot of LGBTQ students,” Talbot said. “It was traumatic.”

Rainbow Day “was a day for us to reclaim that and try to turn it into something positive,” he said.