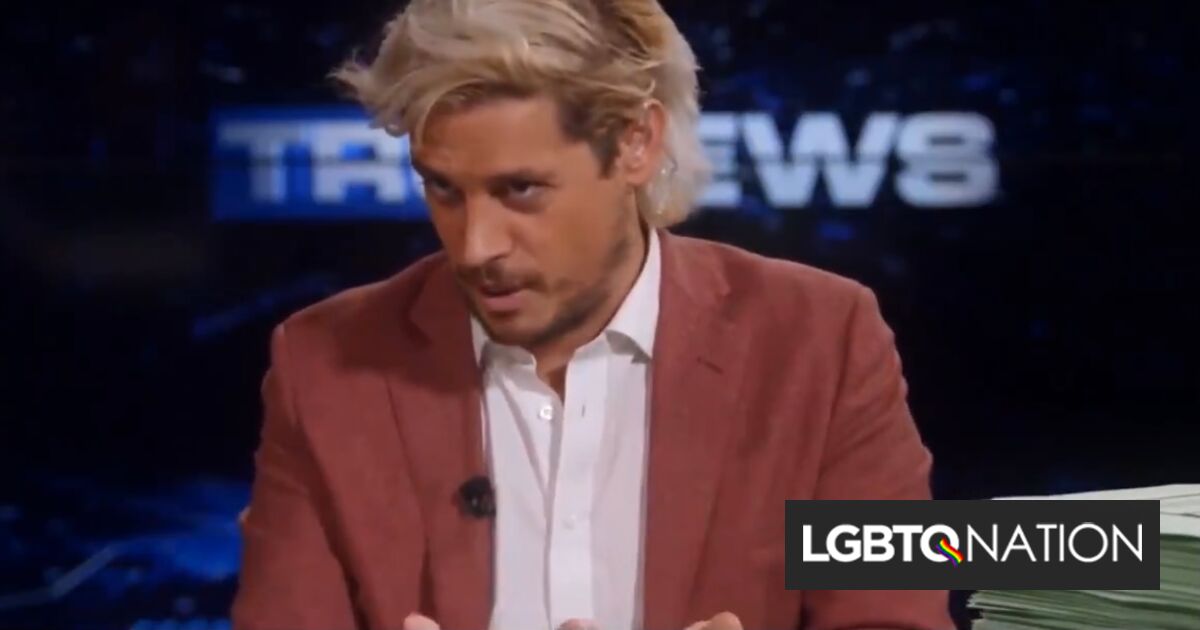 “Ex-gay” pundit Milo Yiannopoulos claims he knows that God wanted him to stop being gay because the dogs don’t holler anymore.

The British far-right provocateur and former editor of Breitbart quite literally believes “When I made my announcement [about being “ex-gay”], the first thing that happened — which will make you laugh, but it’s true — is dogs stopped barking at me.”

Yiannopoulos explained how this happened while guest hosting the June 3 episode of TruNews, a far-right Christian show usually hosted by anti-LGBTQ pastor Rick Wiles. Wiles is busy trying to recover from coronavirus after mocking the vaccine and claiming it will cause a genocide.

From footage shared by Right Wing Watch, Yiannopoulos explains to fellow far-right pundit and co-host Lauren Witzke and their guest, Doc Burkhart, that this was a “sign” to him by God, because “Dogs just didn’t like me at all.”

“You know how everyone has that friend that dogs always goes nuts around? You’re familiar with this, right?” he asks Doc Burkhart. Burkhart said his dogs have not barked at Milo when he’s around, and Witzke notes that his dogs make noise at her, though.

“You must have some work left to do,” Milo said in jest to Witzke.

“This is going to sound so stupid, but this is just how I think that God reveals himself to us, right? This is just my experience of it,” he said, “I was somebody who invariably, without exception, used to make dogs go crazy.”

He explained how he couldn’t visit the house of a local political candidate’s campaign manager because of their “two yappy dogs” who wouldn’t stop barking when he’s around.

“Dogs just didn’t like me at all. But dogs don’t bark at me anymore, it happened almost overnight.”

Since coming out as “ex-gay” in March, dogs have suddenly warmed up to him, and that’s evidence that he is on the path God wants for him.

Milo Yiannopoulos says that as soon as he became “ex-gay,” dogs stopped barking at him, which he believes is a sign from God. pic.twitter.com/AgDrmFka2h

Milo’s latest comments continue the “saga” of the last few months since his claim that he’s given up being gay.

Yiannopoulos spent years growing a fanbase for his misogynist, racist, and transphobic antics, which came crumbling down when he was accused of defending pedophilia.

He didn’t take it well and acted out for years, and last November was his last breakdown, as he swore “vengeance” against Republicans after Donald Trump lost his reelection bid.

Social media commenters were left wondering about the comments — some marveling at Milo’s commitment to his rejection of his sexuality, and others to wonder that if dogs could supposedly sense someone is “ex-gay,” what does that mean when they’re around ‘current’ gay people?

“I know it sounds SO STUPID.” Yeah, it does. It sounds stupid and it sounds deranged and narcissistic.

dogs don’t like him because they are excellent at judging character and trustworthiness.

Remember when Milo Yiannopoulos was banned from social media and people claimed he would become even more “powerful than ever before”? How’s that going? https://t.co/goW03MtzzR