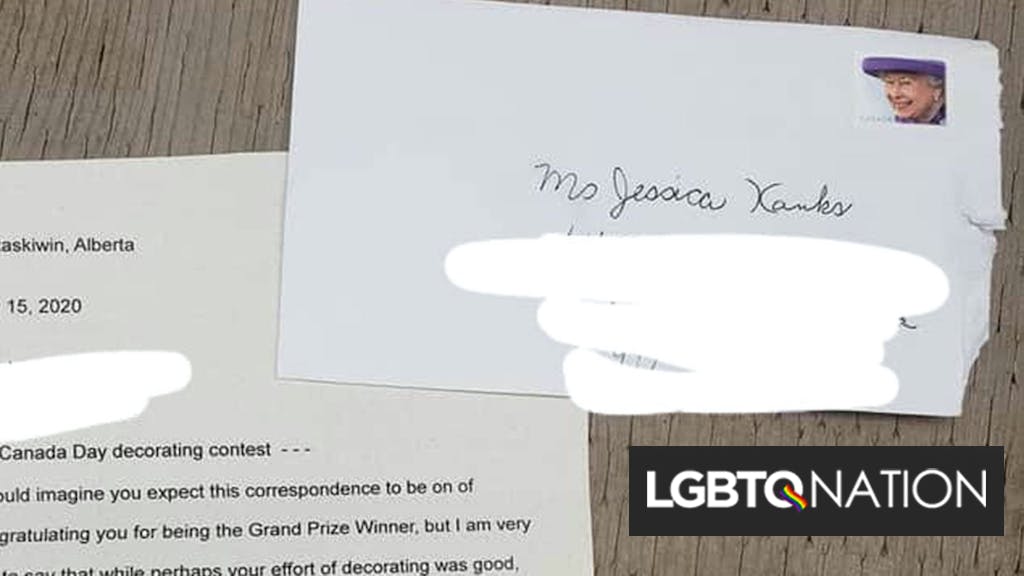 Jessica Hanks, won a local contest in Wetaskiwin, Canada for decorating her yard. But a Pride flag in her Canada Day display spurred someone to send her anonymous letter castigating for supporting “the sick portion of society.”

After she posted about the letter on social media, the town’s reaction blew her away. Not only did neighbors and strangers rally around her, the mayor offered to find a realtor for the anonymous homophobe so they could move out of town.

Related: Taylor Swift did a surprise performance at the Stonewall Inn & we have video

Hanks opened the letter standing beside her teenage daughter who is gay.

Saying the author wasn’t writing to congratulate her on her contest win, they instead attacked her for including a rainbow flag in her patriotic display.

“You apparently have no pride in being a true Canadian in that I do believe that was a multi-coloured ‘flag’ hanging on your fence indicating the ‘sick’ portion of society,” the letter says. “Junk like the ‘Pride’ followers have no place in society and certainly not in Wetaskiwin.”

“If the person who wrote this, sees this post, please know that I was one of the people who proudly helped paint the Pride crosswalks on Main Street this year and last year,” Mayor Tyler Gandam posted in response. “I’m proud of the City I live in and get to be the Mayor for. I hope that we continue to build inclusivity in our community. If you’re unhappy with how things are and need help finding a realtor, please let me know, I’ll be happy to help!”

Hanks says she refuses to back down and plans on making her display even more LGBTQ inclusive – and her neighbors are more than happy to help.

A city councilor and other volunteers will help her paint her fence in rainbow colors this weekend. Residents have also scrambled to buy their own pride flags to fly in their yards to show solidarity.