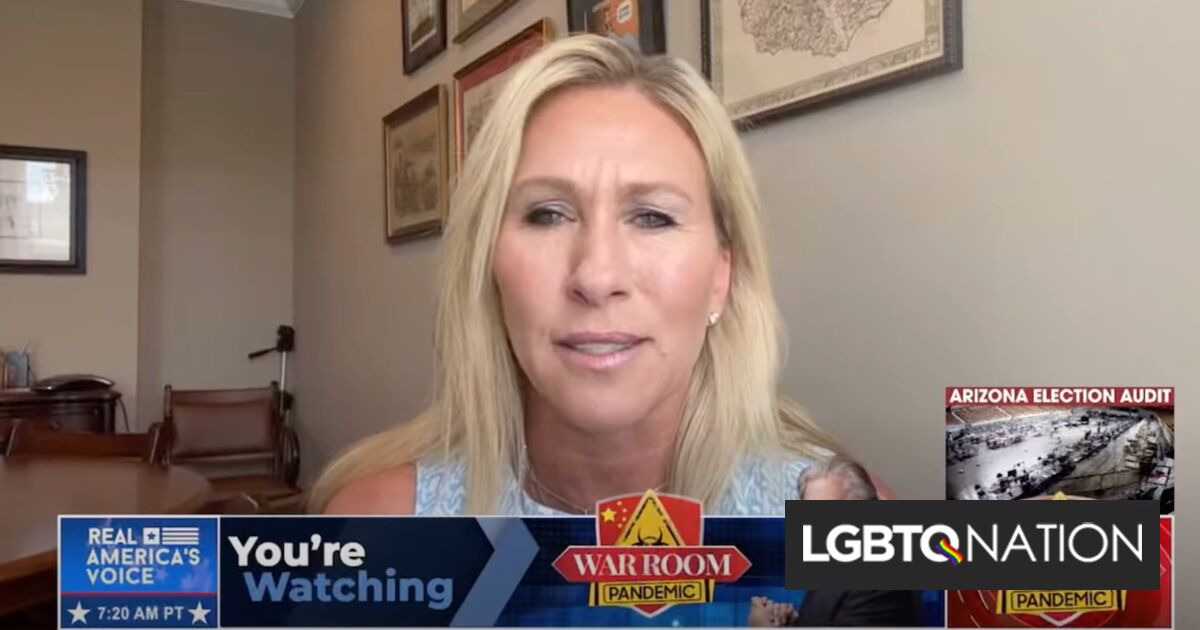 And while Greene has made attacking transgender women and drag queens a political priority, she brought her particular brand of awfulness to this round. She wants transgender women to “stay out of our rape crisis centers and women’s prisons.”

Greene accused Democrats of trying to separate America by identity group “whether it’s transgenders, Blacks, Hispanics” after Bannon asked her about “the war on women.”

“They want everybody to be a victim and then they need them to be dependent on the Democrats and their policies and their plans and goals in order to be able to survive,” Greene insisted. “Now we have the Democrat Party that claims to be the champion for women. They claim that abortion is pregnancy rights but instead that’s killing a baby in a woman’s womb. It’s actually the worst scar a woman can carry for the rest of her life.”

“Their war on women has gone beyond anything we can possibly understand,” she continued. “They are putting men — these are men and I say they are playing dress up and I’m not trying to offend anyone but they are literally having an identity crisis, they are dressing up like women and then they want to be recognized as a woman, which they are not. They never will be and I refuse to recognize them that way.”

Green also chastised Republicans for not fighting “the actual war that’s taking place in America” despite the GOP’s nonstop focus on transgender rights and critical race theory – two non-issues that she has also been laser-focused on.

“Years ago, we had something drip like poison into our water system in this country and that’s called political correctness because everyone got so overly concerned with hurting each other’s feelings,” she insisted. “I’m not concerned about hurting people’s feelings. I’m concerned about speaking the truth and solving problems.”

Greene has a long history of anti-LGBTQ comments, and her career in politics started by protesting Drag Queen Story Hours.

She introduced a bill to ban the rainbow flag from flying at U.S. embassies and co-sponsored an anti-trans bathroom bill.

She introduced multiple motions to shut down Congress just before it debated the Equality Act, which would ban anti-LGBTQ discrimination. The motions didn’t pass, but they forced her colleagues to vote on the pointless motions and ate up over an hour of debate time to make the point that LGBTQ discrimination should remain legal. She called the Equality Act “DISGUSTING, IMMORAL, AND EVIL” in a statement.

Greene put up a sign that said “There are TWO genders: MALE & FEMALE. ‘Trust The Science!’” in response to Rep. Marie Newman (D-IL) putting up a transgender flag outside of her office. Newman’s child is transgender.