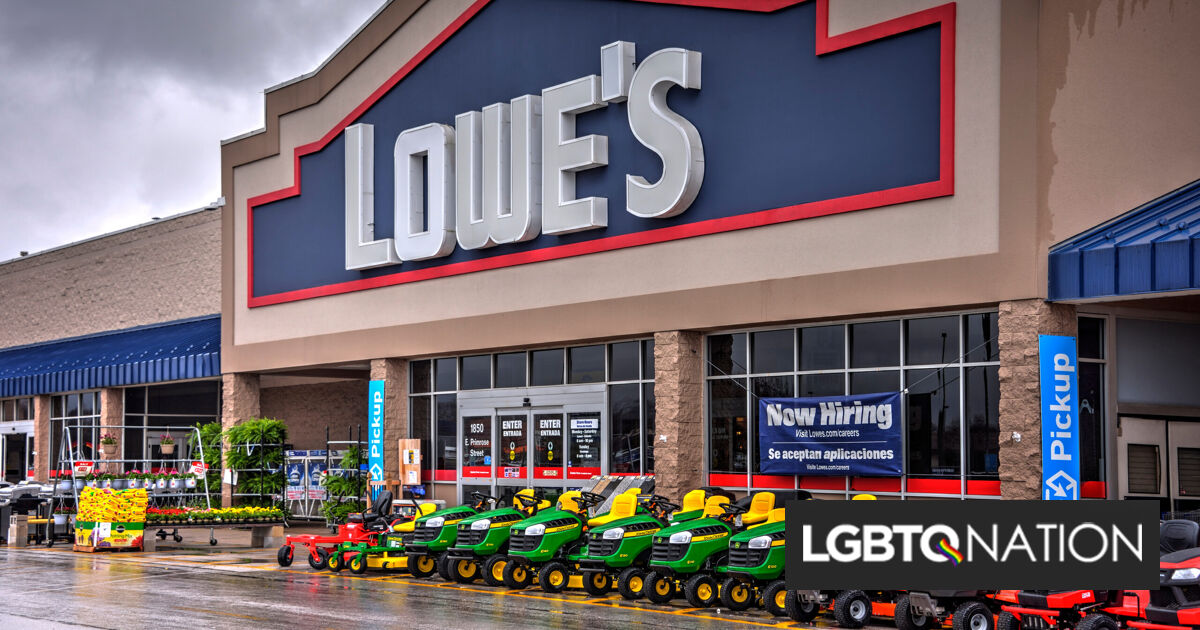 Lowe’s Companies Inc. and an employee of the company are being sued for sexual harassment of another ex-employee, which the plaintiff and his attorney claim happened so much that it was a “troubling pattern.” According to attorney Kelly Armstrong, the unnamed John Doe accuses Mark Fox of perpetuating “some of the most egregious harassment one can imagine” against him.

The accusations include Fox allegedly asking Doe to engage in “edging” together, consistently describing sexual activity to him like making a man “spin like a top” on his penis during sex, and slapping Doe’s buttocks while calling him a “pink starfish.” Fox also allegedly photographed Doe without permission and threatened him if he spoke about it.

Related: A Black trans woman won a $50k discrimination lawsuit. She hasn’t heard anything since.

The alleged incidents happened when Doe worked under Fox at a Lowe’s in Vacaville, California, a town nestled in-between San Francisco and Sacramento. Fox’s behavior drove Doe to complain to managers, followed by formally filing internal company complaints, but they were not heeded and led to Fox allegedly threatening Doe.

Doe even took a leave of absence, only to return and continue facing threats and being fired after his requests to transfer locations were not heeded.

Armstrong, a San Francisco attorney, filed a lawsuit in Solano County Superior Court that laid out the claims in 17 pages. Doe is suing Lowe’s for wrongful termination, invasion of privacy, intentional infliction of emotional distress, allowing a hostile work environment, failing to prevent harassment, and allowing retaliation in violation of California’s Fair Employment and Housing Act.

He not only seeks punitive damages, but a jury trial to prove his claims.

While working with Fox at Lowe’s, Doe allegedly faced harassment and ostracization not only from Fox, but several employees and managers. Fox, an assistant store manager, consistently made sexually explicit remarks and advances toward Doe.

Fox allegedly bragged that because he was bigger than many men, it would be “fun” to make them “spin like a top” on his penis. He would later describe his genitalia “in detail” to Doe and began asking him if he would be interested in performing sexual acts with him.

Fox offered to bring Doe to Las Vegas and perform a “choke and stroke” on him, referring to sexual asphyxiation, according to the suit. He would also ask Doe if he had ever seen a “pink starfish,” which referred to an anus. When Doe said no, Fox slapped Doe’s buttocks “to indicate he was the ‘pink starfish.’”

By this time, Doe alleges that he “made multiple complaints to management, but the harassment continued unabated by Lowe’s.”

Then Fox escalated the behavior.

When Doe was in a bathroom stall one time, he received a text from Fox — it was a picture of Doe’s feet, taken from underneath the stall. When Doe expressed he was alarmed, Fox threatened to “fuck up” Doe. Fox then allegedly continued to photograph Doe when he would go to the restroom and shared it with co-workers.

At least two photos were taken while Doe had his pants down and was actively using the bathroom. The photos showed Doe’s genitalia and buttocks.

Store manager Dave Berlin allegedly took no action when Doe expressed his concerns and told him “to drop the issue.”

After Berlin again took no action, Doe filed a complaint with corporate online in the Lowe’s Associate Care Center. The news made its way back to Fox, and he told Doe, “You better drop your complaint or I’m going to fuck you up.” An unidentified department manager allegedly could hear the threat but took no action.

That spurred Doe to take a leave of absence, but upon returning to work, Fox again allegedly physically threatened Doe if he did not drop the complaint. Doe then requested a transfer to a different location, but was denied, and told he could be fired if he continued to protest his treatment at work.

Doe charges that everyone at Lowe’s “did nothing other than threaten me, call me names, retaliate, and force me from my job. I was trapped between a paycheck I needed to survive during the pandemic and a workplace that traumatized me every day.”

Doe told Armstrong that he went to work “in fear of the humiliation I would suffer once I arrived.” Now, Doe can no longer use public restroom facilities “without fear of being photographed and exposed to others.”

“Male-on-male sexual harassment is common in the United States, but employers routinely fail to take complaints seriously when the victim is a man,” Armstrong said in a press conference. “In an odd twist, men who suffer sexual harassment in the workplace lag behind women who have experienced tangible progress during the #MeToo era.”

“My client repeatedly reported some of the most egregious harassment one can imagine to management — harassment that is difficult to imagine being ignored had the victim been female — but his pleas were shrugged off, met with retaliation, and even physical threats.”

Armstrong also suggested to the Reporter that she believes there are other victims out there.

“Because the sexual harassment was so pervasive, we are encouraging all other victims and witnesses to come forward so that Lowe’s can be held fully accountable,” she said in a text message.

Lowe’s representatives have declined to comment on the lawsuit.