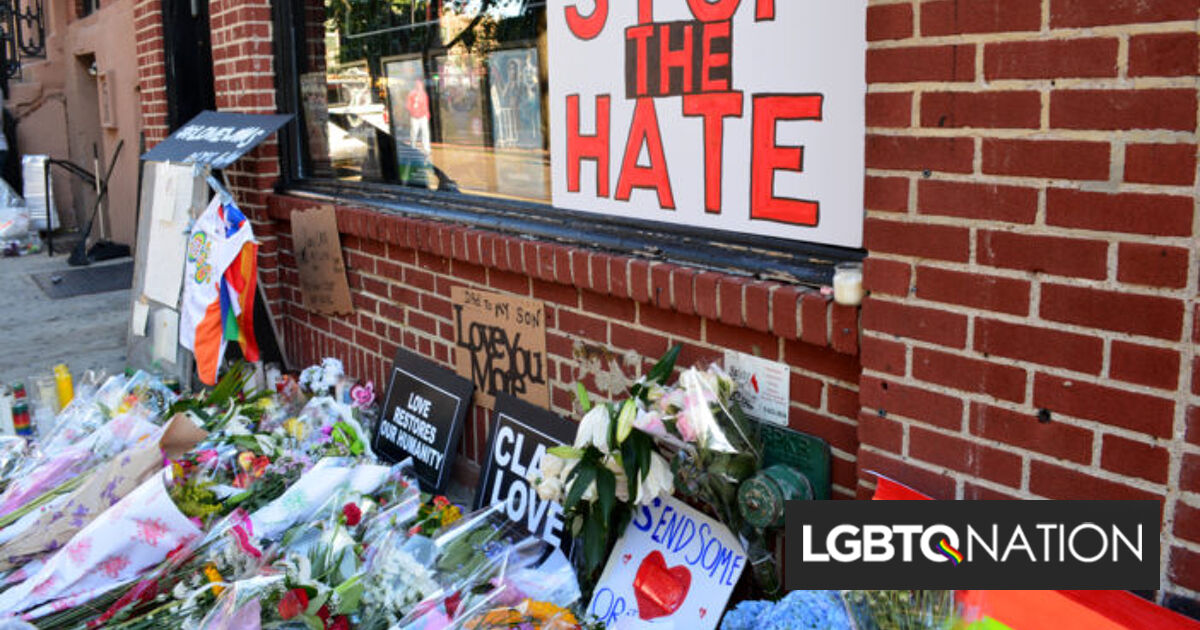 LGBTQ organizations, politicians, celebrities, and regular people have flooded the internet with tributes to the dozens of people who were killed or wounded during the mass shooting at a Colorado Springs gay bar, Club Q.

As memories of the Pulse nightclub mass shooting echoed in people’s minds, reactions were particularly raw – especially since today is the Transgender Day of Remembrance, a day to honor transgender people killed simply for being themselves.

“Waking up to this is giving me flashbacks of June 12, 2016 and Pulse,” Gays Against Guns co-founder Jay Walker told LGBTQ Nation. “Our LGBTQIA2S+ communities remain scapegoats and proxies for weak-minded bigots and maladroits bent on inflicting their pain on the world. I grieve with my community siblings in Colorado Springs, especially those who see Club Q Colorado Springs as a haven, as their meeting space, as their home.”

The group plans to rally at the Stonewall National Monument at 4pm Eastern. The group was formed in response to the Pulse shooting.

In a public statement, LGBTQ ally President Joe Biden said, “Places that are supposed to be safe spaces of acceptance and celebration should never be turned into places of terror and violence. Yet it happens far too often. We must drive out the inequities that contribute to violence against LGBTQI+ people. We cannot and must not tolerate hate.”

Gay Colorado Gov. Jared Polis (D) called the shooting “horrific, sickening, and devastating,” adding, “Colorado stands with our LGBTQ Community and everyone impacted by this tragedy as we mourn.”

“Today is Transgender Day of Remembrance – a day where we should be honoring the lives and memory of trans people lost to senseless violence. Instead, we mourn the losses of yet another hate crime against our community,” San Francisco Pride said in an emailed statement. “Republicans always say this is not the time to politicize gun violence, but that’s because they are complicit cowards to the gun lobby. These people should not have died in vain – this is the time to act. We need true gun violence prevention now.”

Our hearts are broken for the victims of the horrific tragedy in Colorado Springs, and their loved ones. This unspeakable attack has robbed countless people of their friends and family and an entire community’s sense of safety. 🧵https://t.co/HnxIFCXGAn

“We mourn with the LGBTQ+ community in Colorado Springs for the lives taken and those wounded in this act of hate,” Lambda Legal CEO Kevin Jennings said. “America’s toxic mix of bigotry and absurdly easy access to firearms means that such events are all too common and LGBTQ+ people, BIPOC communities, the Jewish community and other vulnerable populations pay the price again and again for our political leadership’s failure to act. We must stand together to demand meaningful action before yet another tragedy strikes our nation.”

There is a direct line between MAGA and the Colorado Springs shooting. pic.twitter.com/zygF5rHHmD

Teaching children about the existence and inherent worth of LGBTQ people isn’t grooming them, teaching them to blindly hate LGBTQ people is.#ColoradoSprings

“Our hearts ache for the victims of the Club Q shooting in Colorado Springs,” said NCLR Executive Director Imani Rupert-Gordon. “5 lives were stolen, at least 18 more injured, and countless lives will be forever changed. It is devastating that they were targeted in a space where we look for community.”

“We have seen an unmistakable rise in hateful rhetoric directed at our community. This rhetoric cannot be separated from the tragedy we grieve today. Anti-LGBT messages contribute to a culture that fans the flames of violence toward us. On Transgender Day of remembrance, we honor trans folks we have lost to violence and rededicate ourselves to ending this violence. To do this, we need real gun reform. And we need to dismantle the culture that allows hateful rhetoric to give rise to tragedies like this one.”

Today is #TransDayofRemembrance when we honor and remember trans lives taken by violence. How horrifying that a deadly attack upon the LGBTQ+ community in Colorado Springs should occur right before this solemn day.

Hate isn’t born in us. It is taught. It must end.

Sickened and horrified by the shooting at Club Q in Colorado Springs.

The LGBTQ+ community is once again the target of the most terrible violence.

And devastating attacks like these will only become more common if we don’t fight back.

“Today, we awakened to the all too familiar horror: another hate motivated mass shooting targeting a community that has been vilified and dehumanized by hateful political rhetoric. It is no coincidence that yet another community refuge, and the safety it provides, has been shattered amidst a political climate supercharged with anti-LGBTQ hate by powerful leaders and right wing extremists. Thanksgiving tables will have empty chairs this week. Holidays will have missing faces,” Equality Florida Executive Director Nadine Smith added. “These are the costs of hate violence — costs we know all too well.”

18 injured and 5 dead in a mass shooting at Club Q in Colorado Springs, CO. Today is Trans Day of Remembrance. Transphobic rhetoric in the US has been rising dramatically in the past year, and this bar was hosting several trans-friendly events this weekend. This is heartbreaking.

This is where it was always going to go, ever since the moral panic incited by Republicans and the countless hate-spewing right wing influencers on here who targeted queer people mercilessly.

Queer activists have been warning us.

If you’ve been calling librarians and teacher “groomers”.

If you’ve been vilifying trans kids and trans adults.

If you want kids not to know gay people don’t exist, and strip their equal righra.

Colorado Springs is the result.