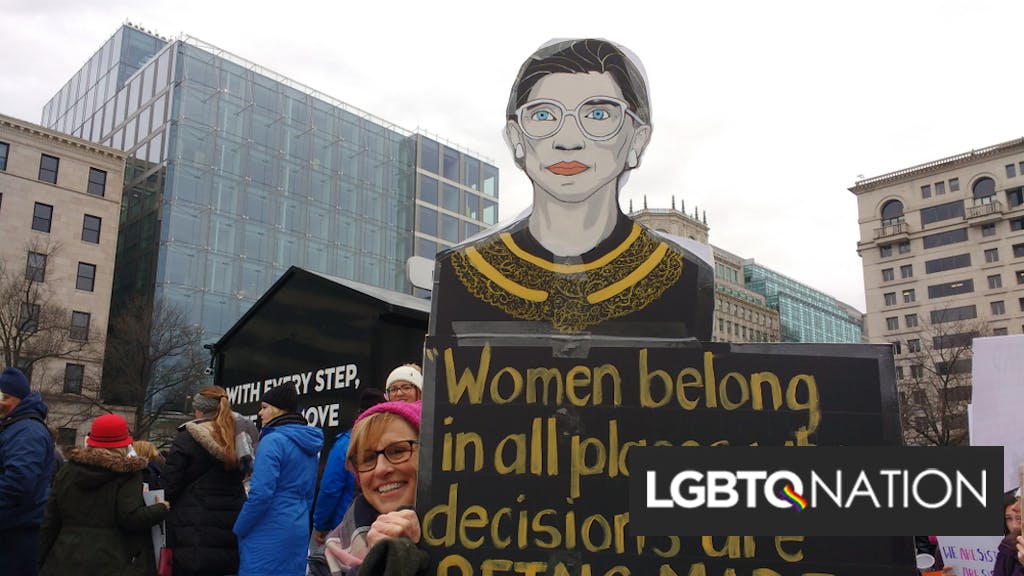 Her death is a shock, and yet not a surprise. Ginsburg has been battling a series of illnesses for years. She was diagnosed with colon cancer more than 20 years ago, and ten years later pancreatic cancer, which finally claimed her. She had said that she planned to remain on the Court until she was 90, but she would run out of time at age 87.

Ginsburg has been repeatedly hospitalized in recent years, leaving progressives with palpitations that she could die and President Donald Trump could nominate another extremist conservative to the nation’s highest court. Now with the election around the corner, Ginsburg’s death will have huge political ramifications.

Ginsburg was one of the reliable liberals on the Court and a vocal supporter of LGBTQ rights. On every major Court ruling in the past 25 years, she has come down on the side of LGBTQ citizens, from declaring sodomy laws unconstitional to overturning “special rights” legislation aimed at barring anti-discrimination protections, to declaring marriage equality a national right.

Ginsburg was on the side of marriage equality from the beginning, but she did express concern about the Court getting ahead of public opinion. She cited the turmoil around abortion rights as the source of her fear, saying that Roe v. Wade came too soon for the public to accept it. But by the time the second case was before the Court, the one that ultmately made marriage a national right, she was clearly ready for the final decision.

“The change in people’s attitudes on that issue has been enormous,” Ginsburg said. “In recent years, people have said, ‘This is the way I am.’ And others looked around, and we discovered it’s our next-door neighbor — we’re very fond of them. Or it’s our child’s best friend, or even our child. I think that as more and more people came out and said that ‘this is who I am,’ the rest of us recognized that they are one of us.”

Her support went beyond her court opinions. She was the first Supreme Court Justice to officiate at a same-sex wedding, in 2013, and performed at least one other same-sex wedding. (Despite their obvious differences in opinion, Ginsburg was a close friend of the late Justice Antonin Scalia, who was renowned for his anti-LGBTQ opinions.)

“Today, we lost an unqualified, undisputed hero. She wasn’t just an iconic jurist, Justice Ginsburg was a force for good — a force for bringing this country closer to delivering on its promise of equality for all,” said Human Rights Campaign President Alphonso David.

“Her decades of work helped create many of the foundational arguments for gender equality in the United States, and her decisions from the bench demonstrated her commitment to full LGBTQ equality. She was and will remain an inspiration to young people everywhere, a pop culture icon as the Notorious RBG and a giant in the fight for a more just nation for all. We extend our deepest condolences to her family and loved ones. What she represented — fairness, justice and equality for all — we must all continue to fight for. Those principles are not transactional, they are fundamental to our democracy.”

“Today we have lost a giant of justice, a champion for equality and progress. Justice Ginsburg was an American hero and pioneer, a voice for so many marginalized people, leaving behind a legacy of courage, tenacity and historic impact in creating a better country and a better world for all of us,” National LGBTQ Task Force Executive Director Rea Carey added. “We are all so grateful for all Justice Ginsburg has done for LGBTQ people, for women, for our ability to control our own bodies, for all that seek to move freedom forward in this country.”

Ginsburg was a pioneer throughout her career. When she enrolled in Harvard Law School in 1956, she was one of only nine women in a class of 500. men. She had first-hand experience with sexism; despite a strong recommendation from one of her professors, Supreme Court Justice Felix Frankfurter rejected her application as a clerk because she was a woman. She worked in academia, building the legal framework against sex discrimination, which ultimately led to the Supreme Court agreeing that discrimination on the basis of sex was unconstitutional under the Fourteenth Amendment.

Ginsburg was appointed to the federal bench in 1980, and Bill Clinton nominated her for the Supreme Court in 1993, making her only the second woman justice. By the time she was on the Court for 20 years, she had attained almost mythical cultural status. She was the subject of a Hollywood biopic and was dubbed the Notorious RBG for her stinging dissents and workout stamina.

Ginsburg’s death is going to set off a scorched-earth battle in the Senate. Republicans, who know they are in danger of losing their majority, to say nothing of the White House, have long wished for Ginsburg’s demise, sometimes crudely. With just 46 days to the election, the GOP will be rushing to confirm someone quickly, abandoning any pretext that their excuse for holding up Merrick Garland’s nomination to replace Scalia was legitimate. (Garland was nominated nine months before 2016 election, but Republicans insisted that voters should decide.)

Trump has already published a list of potential Supreme Court nominees that includes some of the most anti-LGBTQ names out there, including Senators Ted Cruz and Josh Hawley. The prospect of turning the Court into a 6-3 conservative arm of government is too tempting for Republicans to pass up.

Before her death, Ginsburg dictated a statement to her granddaughter that she would not be replaced “until a new president is installed.” How likely her wish is to be granted remains to be seen. But if anyone needed a reminder what’s a stake in the election, Ginsburg’s death provides a sorry and frightening reminder.