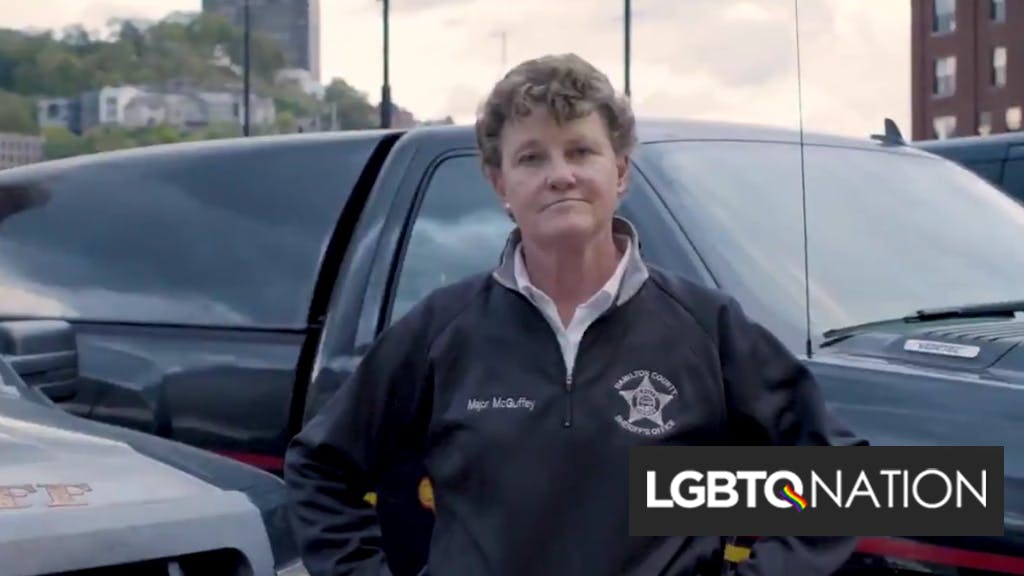 Charmaine McGuffey, one of LGBTQ Nation‘s Heroes of the Year who is running to become the country’s first female and out LGBTQ sheriff of Ohio’s Hamilton County, just released a two-minute campaign ad that proudly puts her lesbian identity front and delivers a surprisingly powerful message about being unfairly targeted for your identity and the need for police reform.

In the Democratic primary, McGuffey ran against the current Trump-supporting County Sheriff Jim Neil, a man she accused of firing her for being lesbian after she spoke out against departmental abuses. She stomped him at the ballot box, winning approximately 70 percent of the vote, and now she’s facing her Republican candidate Bruce Hoffbauer.

Related: This Ohio magistrate came out as trans at work. Now she’s getting community support to be a judge.

Her new campaign ad begins with an image of her walking into the police restroom and finding the word “dyke” taped to the stall door. “I’ve never been an insider,” her voiceover says. “I wasn’t just a woman working in law enforcement. I was a gay woman — that made me a target, a threat.”

The ad then mentions how, during her 33-year career in law enforcement, she worked her way up the ranks to become the first female major in Hamilton County Sheriff’s Office, how she took the county jail from the worst-ranked large jail in Ohio to the best in just three years, and how she was fired after speaking up about the use of excessive force, harassment and accountability in the police department under Neil’s leadership.

“I also know what it feels like to be targeted for who I am and not for something I’ve done, and there are systemic issues that we can no longer ignore,” she says as the ad shows footage of Black Lives Matters protestors demonstrating against systemic racism.

She then accuses her Republican opponent, Hoffbauer, of being unfit for the job because of his history of excessive force, his shooting and killing Walter E. Brown, an unarmed black man in 1990, and his serving on a police unit notorious for terrorizing communities of color.

“From notes on the bathroom door to abuse at the very top, I’ve taken on bullies like him my entire career. I stood up to homophobia and sexism, I’ve torn down barriers that were designed to keep people like me from ever getting a fair shot.”

The ad ends with her saying, “The courage to do what’s right and just, no matter how difficult it may be, that’s what history is calling us to do, and that’s the kind of sheriff I’ll be.”

McGuffey’s message of reform doesn’t seem to just be lip service. During her time overseeing the county jail, she started a committee called WRAP, Working to Refer Appropriate Placement, a weekly meeting that connected inmates to social services programs and increased their ability to successfully reenter their community.

She has been endorsed by the Hamilton County Democratic Party, the LGBTQ Victory Fund, Hamilton County Young Democrats, and former US Representative Gabby Giffords, among others, and was also named local and regional “Law Enforcement Officer of the Year” in 2015.  Additionally, the Ohio House of Representatives also honored her after she was named Public Citizen of the Year by the Ohio chapter of the National Association of Social Workers in 2016.

As a gay woman working in law enforcement, I know what it’s like to be targeted for who I am. I’ve seen justice and I’ve seen injustice. And I know we can do better. That’s why I’m running for Sheriff. Watch my story and help me win:https://t.co/ktxvqiSuaO pic.twitter.com/aqpwO3trS2