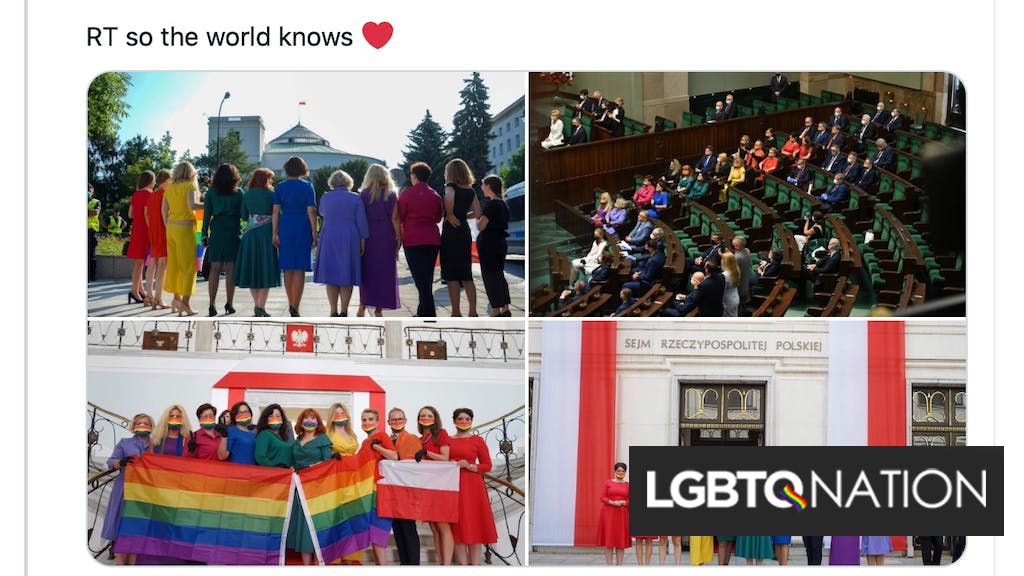 Duda won reelection by demonizing LGBTQ people and campaigning against adoption and marriage rights. The phrase “LGBT are not people, they are an ideology” was a campaign staple.

Duda, who said that this “LGBT ideology” was more destructive than communism, also pledged to ban same-sex marriage, adoption by same-sex couples, as well as the teaching of LGBTQ issues in schools.

Duda’s rhetoric has trickled down to local leadership, Philippe Dam, the advocacy director for Human Rights Watch, told NBC News. Local politicians, empowered by sentiment from the top, have established LGBT-free zones throughout the country. Unsurprisingly, the LGBTQ advocacy group ILGA has said Poland is the worst country in Europe for LGBTQ rights.

While Donald Trump tweeted congratulations to his “friend,” Duda, opposition lawmakers took the opportunity to rebuke the authoritarian leader.

“The President of Poland should defend the rights of all citizens,” Magda Biejat, one of the protesting MPs, wrote on Twitter with photos from the protest.

“While right now we all need to focus on fighting COVID-19, we must not forget to continue protecting the values in which we believe,” the British Ambassador said.

Today in #Sejm @AndrzejDuda is being sworn in as Polish president. Members of Left coalition came in rainbow mask and… look ❤🧡💛💚💙💜 The kind of solidarity we need after campaign of hate, thank you! Rainbow is not an offence, #LGBT are human beings #Poland pic.twitter.com/dj26Y9UTJd

🏳️‍🌈🏳️‍⚧️Today during the inauguration of the homophobic president of Poland, Andrzej Duda, politicians from the @__Lewica , the left-wing coalition, came dressed as a rainbow flag as a statement against the discrimination and oppression in our country.