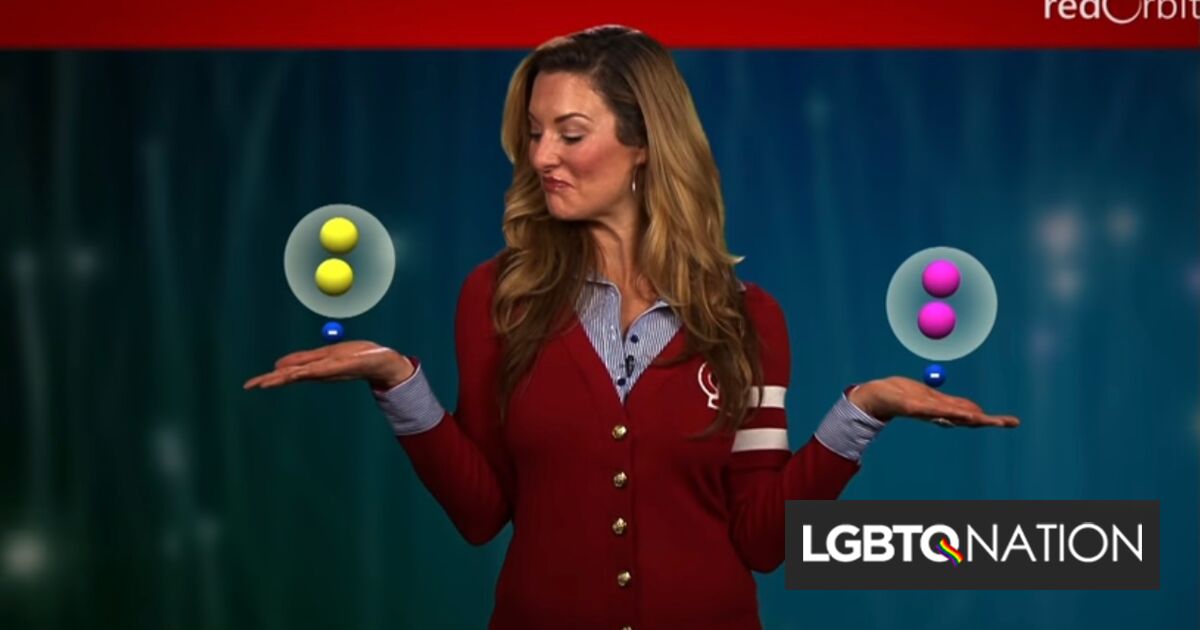 Emerald Robinson, the White House Correspondent for far-right cable network Newsmax is currently unable to post on her Twitter account and not allowed to go on the air with her own employer over a recent, easily-debunked tweet spreading vaccine misinformation.

Robinson (who once hosted a science and technology video show) spars with White House Press Secretary Jen Psaki routinely at press briefings and attacks her frequently. The conservative journalist most often complains that Psaki doesn’t call on her as much as other reporters, and tries to paint Psaki’s answers over the vaccine and President Joe Biden-proposed or supported vaccine mandates as lies. Now, though, her own employer has shut her down and put her on the network’s bench — right as Newsmax themselves revealed they will institute a vaccine mandate.

On November 1, Robinson started the new week and month off by sending off a tweet (one of many for her) that misrepresents or presents a falsehood about the COVID-19 vaccines. “Christians, the vaccines contain a bioluminescent marker called LUCIFERASE so that you can be tracked,” she declared.

She implored 440,000 followers to “Read the last book of the New Testament to see how this ends,” referring to the Biblical book of Revelation, suggesting Luciferase is related to Lucifer, another name for the Devil. She has previously called the vaccine the “Mark of the Beast,” a Biblical reference to the Devil.

Luciferase is not related to Lucifer. It is the name for a chemical enzyme derived from luminescent organisms, like fireflies. It is not an ingredient in any of the vaccines, as independently fact-checked by numerous sources, and the only relation between it and the vaccines is that it may be in used by labs also developing the vaccines or doing research in relation to it.

Elliot Jacobson, the network’s executive vice president and chief content officer, issued statements the following day to make clear that the network did not agree with Robinson’s “findings.”

“We have seen no evidence to suggest LUCIFERASE or LUCIFERIN are present in any vaccines or that they are used as any sort bioluminescent marker,” Jacobson said. He then said that Newsmax is “a strong proponent that COVID 19 vaccines are overarchingly safe and effective” and “such false claims [about it] have never been reported on Newsmax.” They added that she is not assigned to report on the COVID-19.

The tweet was subsequently removed for violating Twitter’s disinformation policy, and Newsmax issued another statement on November 4, saying to the Hill, “Newsmax is currently reviewing the posts and during that period, Ms. Robinson will not be on air, but continue with duties for the network.” That meant that while she is still covering the White House and eligible to attend press briefings for the company, she would not be on air with her reporting on Newsmax TV.

Furthermore, a subsequent tweet by Robinson was removed and listed as “no longer available,” and she has been suspended from posting due to violating Twitter’s guidelines multiple times.

Multiple employees at Newsmax praised the decision on background to the Daily Beast, with one saying, “I think it’s a good idea. If we are going to be viewed as a news organization, we have to act like one.”

In her inability to tweet or appear on the air, Robinson has resorted to Substack, a newsletter-based platform, to publish further rants to “clarify” her claims. She claims she received a “tip” that she was undertaking “research” to follow after her tweet, because she has supposedly learned that “Big Pharma… and Big Government… [have] big plans for Luciferase” and are fighting over ownership of the vaccine because of the chemical, among other factually-blank statements.

Meanwhile, the same day they announced her suspension, Newsmax separately told employees in an internal memo that they would be installing a COVID-19 vaccine mandate. They proposed a mandate consistent with others implemented around the country and described to employees as necessary to comply with the potential instillation of the Biden administration’s OSHA-issued vaccine mandates for most major companies.

The network is requiring staff to have completed inoculation from one of the vaccine regimens by January 4, 2022, making clear to staff, “To ensure that we are in compliance, we require that all vaccinated employees submit a copy of their vaccination card.” Otherwise, they will have to receive testing and a negative result weekly, according to Mediaite.

While her employer has quickly shut down Robinson’s “reporting,” this is not a one-time mistake for her or the network. Newsmax TV has openly attempted to appeal to Trump’s base and position itself as the actual news channel for the right, as opposed to the more widespread Fox News Channel.

As one of the few right-leaning publications with a spot at the daily press briefing at the White House, Robinson has taken nearly every opportunity to try and ask Jen Psaki about something vaccine-related, although the network claims that COVID-19 reporting is not in her duties.

She also routinely tweets out condemnations of Psaki for vaccine-related remarks, or simply not calling on her enough.

You know when every White House press briefing with @PressSec will end because it’s usually my turn to get a question.

The major problem in White House press coverage right now: major conservative media outlets have been pushed to the back rows of press briefings & then @PressSec cuts short her briefings before calling on those media outlets.

As a recent example, Robinson tried to argue with Psaki that out Transportation Secretary Pete Buttigieg was still on paternity leave and not working, while Psaki tried to explain that she had been on a conference call with him that morning. Robinson then tried to interrupt other reporter’s questions to ask an unrelated “follow-up” afterwards.

Last month, Psaki had to tell Robinson to “stop yelling” after asking her a question about Hunter Biden and interrupting her while she tried to direct her to the proper channels for the answer.

Robinson moved to journalism and media work after years as an actress, appearing on soap operas and straight-to-disc movies.

Newsmax’s other talent has consistently challenged the validity of the science behind vaccines and derides vaccine mandates. They’re not likely looking forward to Newsmax’s mandate.

Newsmax host Grant Stinchfield gave me the following statement when I asked him about his company’s vaccine mandate: “I am flattered the fake news Washington Post is so concerned about my safety, but my personal health choices are none of your business.”

I will not comply w/ any organization’s attempt to enforce Biden’s capricious & unscientific Medical Apartheid mandate.

I will not be forced into the injection, nor will I disclose my vaccination status.

No one should be pressured to choose between medical privacy & their job.

Robinson will likely be chief among them.

Biden does not have the legal authority to mandate you get vaccinated. Your body belongs to you.

We are sliding into tyranny.

The United States is a post-constitutional nation now. If Biden can mandate that you must get vaccinated or lose your job in a private company – who are we kidding?

The pandemic is to force you to get the vaccine.

The vaccine is to force you to get the vaccine passport.

The vaccine passport is to force you into the social credit system.

The social credit system is to force you into obeying the government.

Dear Christians: you know you must resist the Mark of the Beast so you better start with vaccine mandates.

Meanwhile, Psaki is recovering from a breakthrough case of coronavirus, Psaki, who is vaccinated, got tested for coronavirus after several members of her family tested positive for the virus on Sunday.