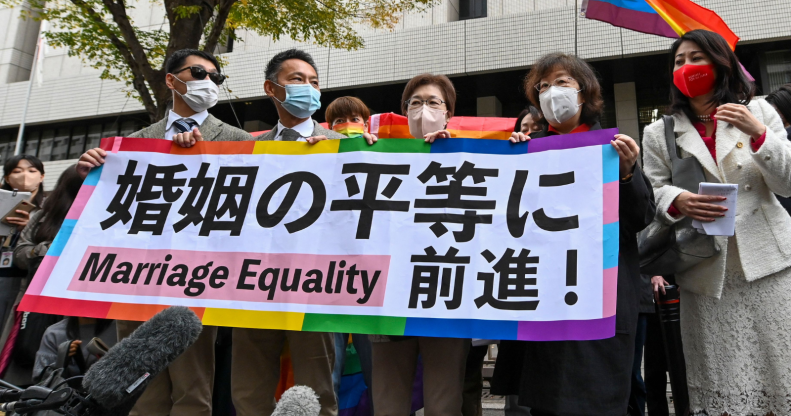 The Tokyo court dismissed the case that urged Japan to acknowledge the same-sex marriage ban as unconstitutional. (Getty)

A Tokyo court has ruled to uphold a ban on same-sex marriage but has noted the lack of legal protection for LGBTQ+ couples.

The Tokyo district court ruled on Wednesday (30 November) that the ban was constitutional, but that the absence of a legal system to protect same-sex couples is an infringement of their human rights.

Japan is currently the only G7 nation that does not recognise same-sex marriage.

Lawyer Nobuhito Sawasaki, who was involved in the case, said the ruling was “a fairly positive thing.”

“While marriage remains between a man and a woman, and the ruling supported that, it also said that the current situation with no legal protections for same-sex families is not good, and suggested something must be done about it,” he added.

While dismissing the case, the judge noted that blocking same-sex couples from legal pathways to marriage was irrational.

Currently, Japanese same-sex couples are permitted to engage in civil unions, but marriage remains, at a constitutional level, between a man and a woman.

This means that, while a union can be recognised, same-sex couples cannot inherit each other’s assets or adopt.

Furthermore, hospital visits in the case where one half of the couple is either dying or in a critical condition are usually not permitted as the couple are not legally recognised as family members.

The plaintiffs, which included four same-sex couples, sought 1 million yen (£6,000) in damages, which was rejected by the Tokyo court.

Despite the rejection, the group said they were encourage by the ruling.

“There parts of this that were disappointing, but parts of it gave me hope,” one of the plaintiffs said to The Guardian.

The case was avidly monitored by human rights campaigners after a Sapporo judgement in 2021 found the ban on same-sex marriage was unconstitutional.

But, in June 2022, an Osaka court ruled that the opposite was the case.

Speaking to Reuters, plaintiff Machi Sakata – who made up one of the three couples petitioning the Osaka court to acknowledge the ban as unconstitutional – said that the ruling “may really corner us.”

“I actually wonder if the legal system in this country is really working,” Sakata continued.

Plaintiff lawyer Akiyoshi Miwa vowed to appeal at the earliest convenience, adding that it was the right of same-sex couples to “have access to the same things as regular couples.”

Addressing the Tokyo ruling, Marriage for All Japan director and activist Gon Matsunaka said the ruling was similarly “hard to accept.”

“Both heterosexual and same-sex couples should be able to benefit equally from the system of marriage, as everyone is equal under the law.”