Is Jerry Falwell Jr. setting the stage to return to leading Liberty University? 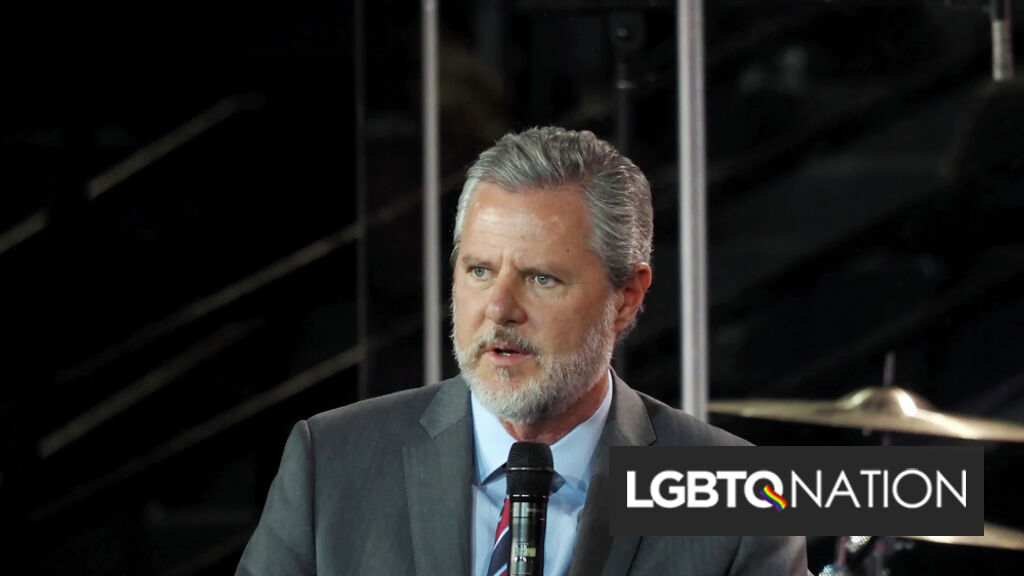 Just six months ago, Jerry Falwell, Jr. was suing Liberty University, claiming the school had defamed him after the board forced him to resign following sexual and financial scandals. The last straw was a series of alleged sexual relationships between Falwell, his wife, and several 20-something year old men, including an ex-Liberty University student.

Since, Falwell has made public appearances on campus, publicly boasting about how popular he remains with the school’s community. Now, observers and school community members are speculating that he could be returning to helm the influential evangelical college.

An April 2 report by Politico features an interview with Falwell and people with ties to Liberty University, exploring his growing re-connection to the school. He has appeared at school events, attended lacrosse games and made social media posts cheering the college’s sports teams and students.

“Despite having sued the university for having removed him as president in the wake of questions about his personal life and financial dealings, [Falwell] still considers Liberty his home turf, now and forever,” the article finds.

Falwell told the publication that he “definitely” plans to increase his presence at the school.

“The employees and the board have been nothing but supportive, 100 percent. The students all want to get their picture with me. They thank me,” he claimed.

Falwell was reportedly getting $10 million in his exit package, but filed a lawsuit claiming the Lynchburg, Virginia-based school defamed him and broke their contract with him. Falwell, now reporting he was “owed” $10.5 million, and the school’s board resolved the matter on their own.

“The university board admitted there was no fireable offense and they were reacting more to the press and the Twitter mob than anything else,” he claimed.

Liberty University’s community is amidst “an ongoing reckoning about the direction the school should take,” the report finds, with “reformers” trying to push the school to openly reject Falwell and his behavior, especially in light of trysts he allegedly witnessed between his wife and at least one former student.

Others “are perplexed” by his return to the campus and are “increasingly skeptical” that the community he presided over will suddenly turn on him. Falwell’s two sons and about three other family members remain employed there, and rumors suggest that Falwell’s brother, Jonathan, may get hired to strengthen the school’s religious ties.

Since he left, the school’s most open rebuke of Falwell came last month when the school ended its relationship with Charlie Kirk, a pro-Trump activist Falwell hired in 2019 to co-create the “think tank” Falkirk Center.

Falkirk — in addition to being a mainly political activist body that had awkward placing on the religious school’s campus — had reportedly used university funds to produce ads promoting former President Donald Trump, and to employ a former Trump aide. Liberty University will be renaming Falkirk as the “Standing for Freedom Center.”

Liberty University was founded by Jerry Falwell, Sr., one of the most powerful televangelists of the twentieth century who co-founded the notoriously anti-LGBTQ group Moral Majority. The school has long enacted a ban on openly LGBTQ students.

When Falwell Sr. died in 2007, Falwell Jr. succeeded him as Liberty University president. He was one of Donald Trump’s earliest evangelical supporters.

The acting president of Liberty University following Falwell’s departure has been anti-LGBTQ activist Jerry Prevo, a pastor who helped found the Alaska chapter of the Moral Majority. He allegedly insinuated that a mayoral candidate in Anchorage was gay in the 1970s to help get his opponent elected.

Liberty University hasn’t publicly signaled that they’re ready to dump Prevo, but they are “so far staying close to the path that Falwell laid out for it before he departed,” Politico deemed, adding that Prevo was a “relatively sympathetic” associate of Falwell.

But Prevo also just hired an anti-LGBTQ activist that he worked with in Alaska, Glenn Clary, to become a new vice president of the college. The school also directed the community to refer to Prevo as “President and CEO,” not acting, although they have not formally announced him being permanent.

For years, Falwell Jr. had been caught flouting Liberty University’s rules, which ban “social dancing” and drinking alcohol, even for students over the age of 21. He has been spotted in nightclubs and posted pictures of himself with his pants undone to social media, with a drink in hand (he claims it was “black water”).

Falwell Jr.’s tenure had been marked by multiple scandals, both sexual and financial, which were first the subject of an in-depth Politico expose in 2019.

The evangelical leader was placed on “indefinite leave of absence” by the school’s board in August after posting a picture on social media of himself and another woman with their pants undone. The school pledged to examine the allegations of impropriety.

That investigation still formally remains underway, eight months later, and there’s no guarantee that the school will publish the findings. A former administrator said to Politico, “I don’t know anybody who’s optimistic that the investigation is going to be properly received or processed.”

After he was put on leave, Falwell blamed his behavior on an affair his wife had with “an ambitious young man who was working at our hotel.” Falwell did not mention him by name, but shortly after, former hotel attendant Giancarlo Granda stepped forward.

“Becki and I developed an intimate relationship and Jerry enjoyed watching from the corner of the room,” Granda said.

The day after, Falwell submitted his resignation. He had agreed to step down, then denied it when it was reported, and then agreed again before actually submitting his resignation letter on August 25.

Two other men, Gordon Bello and an anonymous Liberty University ex-student, then stepped forward to discuss their intimate relationship with the couple. The anonymous student claimed Becki performed unwanted sexual acts with him and then stalked him for months.

A few days later, Becki called 911 after an intoxicated Jerry fell down the stairs and began bleeding. The couple refused to provide their names or level of alcohol consumption at first, and then did not cooperate with emergency personnel.

Later, Trump’s former lawyer and fixer Michael Cohen would confirm in his book his belief that Falwell only endorsed Trump in 2016 after being threatened with blackmail.

In the time since Granda came forward and accused the then 50-year-old couple of approaching him for sex when he was 20-years-old, he said that the Falwells “have been relentlessly harassing me and people close to me.”

“Everyone at Liberty University treated the Falwells like a royal family,” Granda said. “Faculty, the Board, legal team and friends within the trusted ‘inner circle’ all looked the other way out of fear.”

Falwell’s personal trainer, who was also exposed for having a close relationship with the couple, is currently suing Reuters for $10 million for “ruining his reputation” for reporting on their relationship.

Just weeks ago, Falwell revealed he had underwent a series of hospital stays due to health issues, which he says stem from blood clots in his lungs. He revealed this to explain “why I’ve been so ‘absent’ from LU,” despite not having an official capacity at the school.

Liberty University declined to comment to Politico in addition to the Washington Examiner.