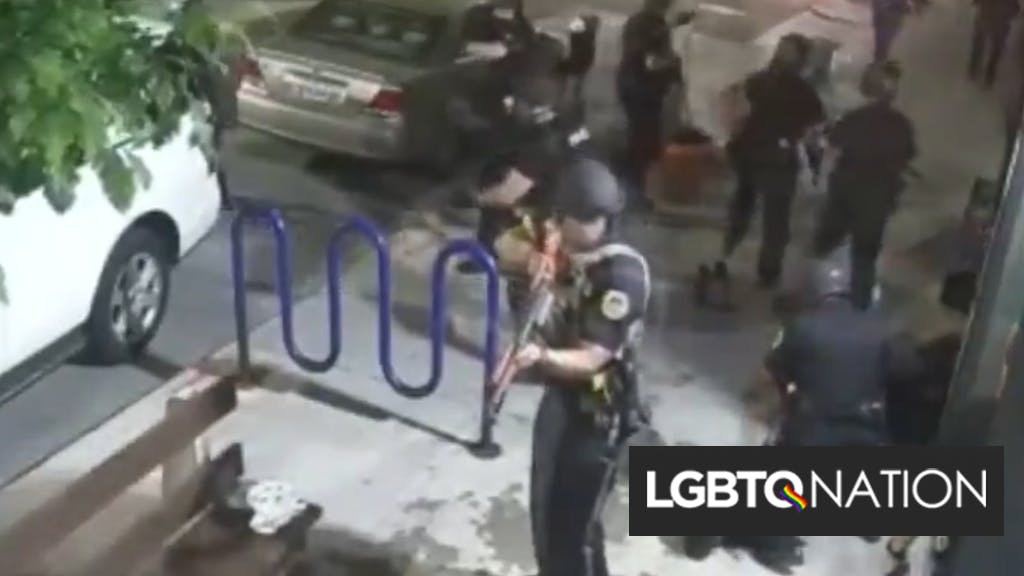 An LGBTQ venue was raided by police earlier this week for providing first aid for protestors.

The Blazing Saddle, an LGBTQ bar in Des Moines, posted a video to Facebook showing around a dozen armed police officers raiding the bar late Monday night, the first day of Pride Month.

Related: Police opened fire on a gay bar because the owner was handing out water to protestors

Protests erupted all over the country last week after a video of an unarmed, handcuffed Black man dying in police custody surfaced. Minneapolis police officer Derek Chauvin kneeled on the neck of the victim, George Floyd, for eight minutes and 46 seconds, including three minutes after he stopped breathing.

After days of protest, Chauvin and three other officers have been fired and charged.

The Blazing Saddle, on Facebook, wrote that staff watched the local Black Lives Matter demonstration on television and saw that police officers were using tear gas against the protestors.

“Three of our people were prepared with a backpack full of first aide [sic] supplies and went outside in case anyone would be in need of assistance post-protest,” the bar’s co-owner Bryan Smith wrote in the post.

The supplies included bottled water, milk of magnesium (a remedy for tear gas), and towels.

Vana B, showgirl at the bar, posted to Facebook that staff was tending to protestors who were “in agonizing pain.” While the workers were at the bar past curfew, she said they stayed there to keep an eye on the bar and weren’t participating in the protests.

Then police allegedly arrived in two trucks with guns pointed and arrested three people outside of the bar. Other staff members went inside and locked the door, and police made them unlock it.

“As they held us at the front door with guns, two officers went into the bar to make sure it was ‘clear,’” Smith wrote. “They found our fourth person and thoroughly frisked them before bringing them outside, then the officers continued to sweep the bar looking for others.”

Vana B said that she ran to the basement to hide because she was “terrified.”

“My instinct was to run, so I turned around and ran quickly into the bar, down into the basement, and hid under a shelf,” she wrote. “Two policeman proceeded into the bar and began a search. They shouted down the stairs where I was hiding and asked if anyone was down there and to come up right now.”

“I didn’t at first until they said they would come down, to which I responded, ‘I’m down here.’ They said get ‘Get up here now!’ so I proceeded to the bottom of the stairs where I was met with an officer with a flashlight and a pistol in hand pointed down at me.”

Three people were taken to jail after the raid, and the bar said that one of them was denied medical care. They were processed after waiting several hours and released with tickets, Out reports.

Another angle of the raid was posted to Twitter. The Facebook video can only be seen on the bar’s page.