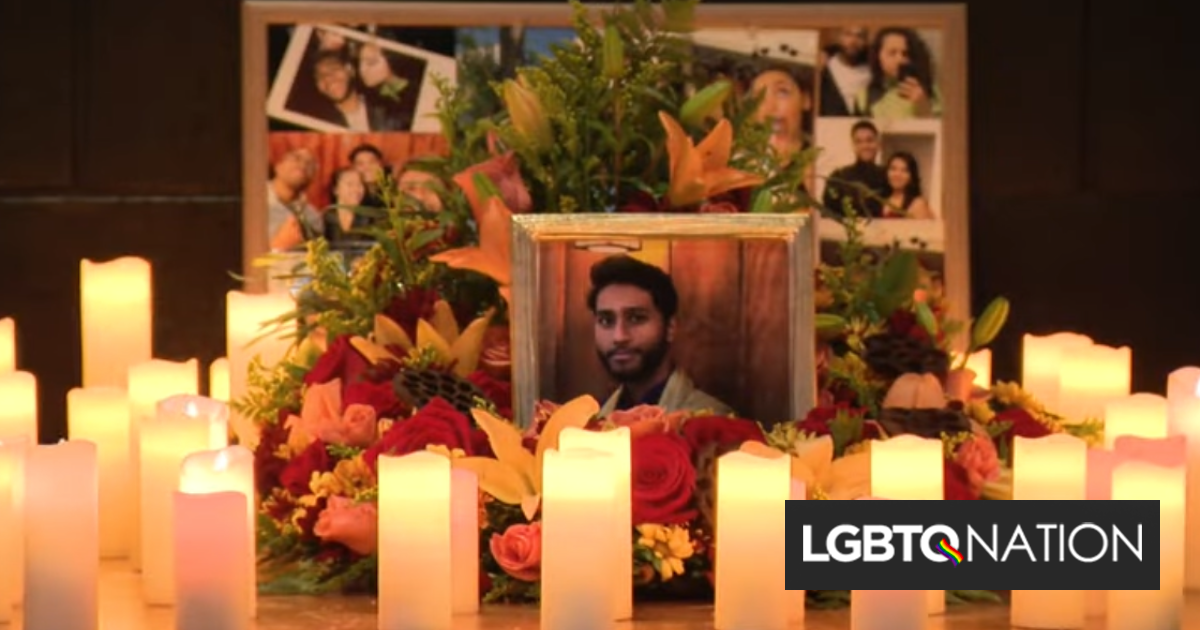 More than 100 people came to the Center on Halsted LGBTQ Community Center in Chicago to honor Suraj Mahadeva, a 26 year-old gay Filipino and Sri Lankan man who was shot to death last week. Mahadeva was remembered by many of his friends and community members for his positive impact on so many lives, in addition to his well-known selflessness.

Mahadeva was standing on his friend’s stoop in the Palmer Square neighborhood after 3:00 am when he was shot. It’s not known if the shooter left on foot or by vehicle after. The Chicago Police Department have not shared if they’ve identified any suspects or have additional leads at this time.

Mahadeva originated from Michigan and graduated from Michigan State University in 2018, majoring in neuroscience — and minoring in dance. Despite his out-of-state roots, he became a beloved member of Chicago’s LGBTQ and South Asian communities. His first name, Suraj, literally translates to ‘rising sun.’

“Suraj was a dedicated medical clinician at a dermatology office in which he was aspiring to become a physician’s assistant. He was passionate about his Sri Lankan and Filipino cultural heritage,” a GoFundMe started by Anika Mahadeva and Christina Buckler reads. “Suraj was vibrant, confident, talented, and so full of life.”

According to friends and loved ones, Mahadeva volunteered whenever he wasn’t working, often teaching autistic youth to swim or helping the homeless. His friend Teja Kodali recalled that he He was such a rare personstated his one goal in life was to “help others.” The Asian Americans Advancing Justice organization of Chicago confirmed Suraj helped them “in direct actions for our collective liberation over the past 2 years.”

“We are deeply saddened by the tragic loss of another member of the Asian American community,” they said in a statement. “Suraj had his whole life ahead of him and we are heartbroken that his life was cut short. Suraj was an active member of queer, Filipinx, and South Asian communities across Chicago and the Midwest.”

In what some consider fitting, Mahadeva’s final Instagram story post was a picture of him wearing a Mahatma Gandhi quote reading, “The best way to find yourself is to lose yourself in the service of them,” on his shirt.

“At a time in my life when I was trying to understand my queerness for me, he cooked me dinner in his apartment, and he made fried fish — Filipino-style — [when] I was in such a sad state,” friend Christian Aldana recalled at the Center on Halstead event. “I don’t think he knew at the time, but that meal meant so much to me because I felt so seen by someone else who understood the things I was thinking about and going through and understood that having some sense of home and stability is so important, especially for queer people.”

Kodali stated, “He was such a rare person. I don’t think I will ever meet anyone like him. He taught me so much about life … I really think the world is going to be a dimmer place without him.”

A family friend named Jennifer told Block Club Chicago, “I honestly can say I’ve never laughed so hard in my life or felt so much joy than when I was with Suraj.”

In the pre-dawn morning hours on December 11, Mahadeva stepped outside of his friend’s home on North Albany Avenue, and was trying to return inside at about 3:25 am. That’s when he was shot, at least once, in the head. He died at Mount Sinai Hospital.

It remains unclear if the shooting was targeted, random, and/or the result of prejudice. Still, while, loved ones still hope they will get justice for Mahadeva. it isn’t going to replace the irreplaceable void left in his absence.

“This has hit very hard for us because we don’t know what the reasons were. We don’t know who did it,” his sister, Althea, told Block Club earlier this week. “The best way to be safe is to catch the person who did this and to stop people from being able to do something like this again.”

She also shared that “While he was still in school, he would come out to Chicago for pride events. The LGTBQIA community in Chicago, as well as his friends from high school, is why he moved to Chicago.”

The GoFundMe in Mahadeva’s honor has raised more than $25,000 in just over three days.

Anyone with any information is encouraged to contact the Chicago Police Department. Tips can be left anonymously at CPDTip.com.