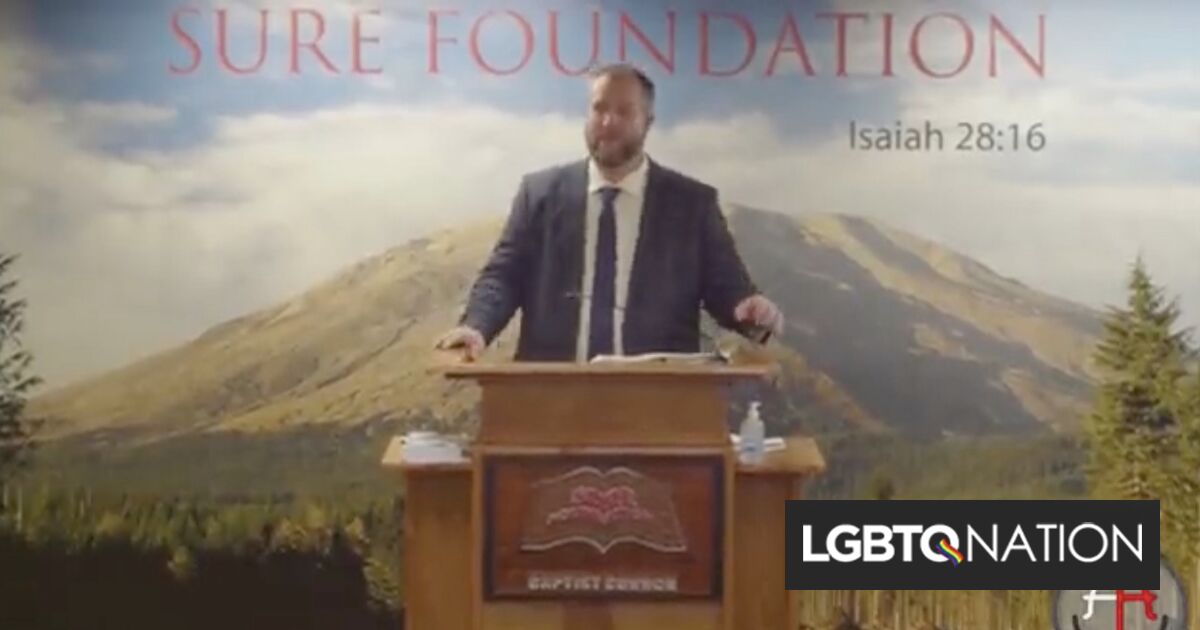 A clip of Thompson’s sermon, posted online by atheist activist Hemant Mehta, showed the pastor claiming that homeschooled students are smarter than public school students “because [public schools are] teaching them more about sodomy than they are about actual studies in, like, math and geography, and history and all this stuff.”

No schools in the U.S. teach more about sodomy than other subjects. Nevertheless, right-wingers and conservative politicians have long claimed that schools are hotbeds of queer indoctrination taught by pedophilic “groomers.” Such claims have fueled Republican campaigns against “wokeness” in schools and increased harassment against educators. Both have contributed to record numbers of teachers recently leaving the profession.

“Today in 2022, we have hardly anybody that wants to stand up to the bullies of this world, to the sodomite agenda, to the woke agenda to the, you know, the weirdo liberal freakballs that are teaching people in schools,” Thompson continued.

“Where literal pedophiles can be allowed to dance in front of children and put money in their waistband like they’re at a strip club where they serve alcohol,” he added.

His mention of children putting money into pedophiles’ waistbands is possibly a reference to a neo-Nazi meme shared earlier this year by Christina Pushaw, the press secretary of Florida Gov. Ron DeSantis (R). Pushaw posted an image of what she said was a child putting money into a drag queen’s g-string at a recent queer event. In reality, the image was of a cisgender, female burlesque dancer taken several years ago.

In Thompson’s sermon, he also claimed that school policies recognizing students’ pronouns have led to schools recognizing children who identify as animals.

“‘You know what my proper pronouns are? I’m a he-she-it-they-dog cat-monkey. I got the litter box in the room. I’m a cat: meow meow.’ That’s the kind of stuff that’s going on in public schools, and they’re not even telling the parents about it… I don’t understand what’s going on. You can’t just identify as whatever you want to be and you’re magically that. Everybody knows you’re not a cat, you idiot.”

He then spews a bunch of conservative anti-trans lies, including, “Literal pedophiles can be allowed to dance in front of children.” pic.twitter.com/zlPzjkFS7P

Thompson’s claim about students identifying as cats and demanding litter boxes is a reference to a right-wing lie started by Lisa Hansen. Because Hansen opposed federal regulations allowing trans students to use school restrooms matching their gender identities, she claimed that students who identify as cats were allowed to use litter boxes in one school’s unisex restroom.

A Michigan school superintendent was forced to write an email to parents debunking the lie. Nevertheless, the lie has been repeated by right-wingers, including by Nebraska Sen. Bruce Bostelman (R).

During a televised debate, Bostelman claimed that student “furries” were allowed to interact with teachers by meowing and barking. He also said that one student who was denied a litter box later defecated on a classroom floor. Bostelman later admitted that the story wasn’t true.

This isn’t the first time that Sure Foundation Baptist Church has been caught spewing anti-LGBTQ hatred. In February, Pastor Danil Kutsar said, “I hope every single homosexual dies.” He also said it was great when gay people die by suicide. When confronted with his words, Kutsar said, “I take back nothing… I hope every fa***t dies.”