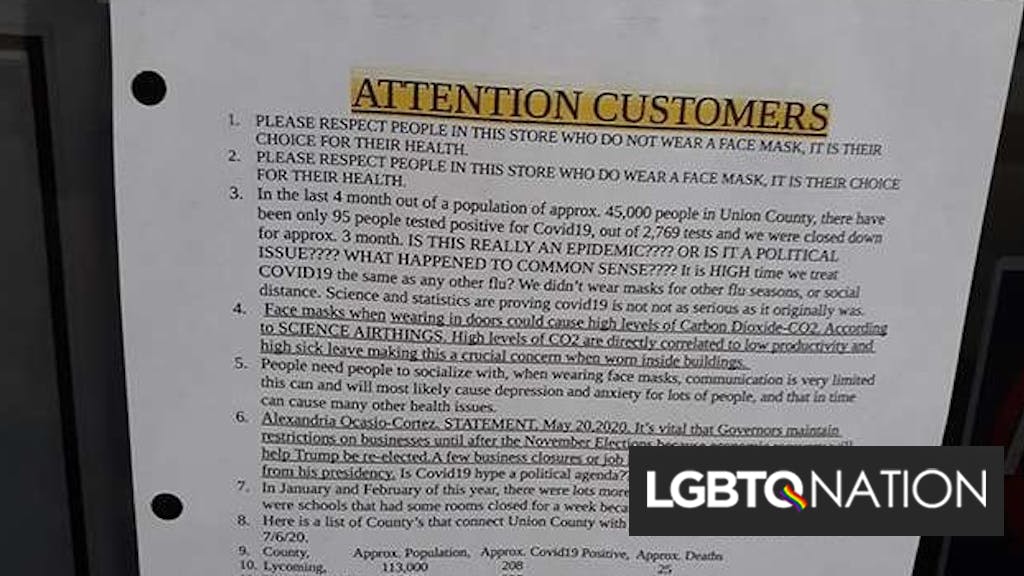 Wenger’s Grocery Outlet, a discount supermarket in Mifflinburg, Pennsylvania angered customers and locals by posting a horrific sign on their door that promoted coronavirus conspiracy theories and told customers to “respect” patrons who refused to wear masks.

Tucked toward the bottom of the rambling message, the owners included an attack on LGBTQ people: they “spread deadly diseases and sicknesses.”

They included a fake quotation that said that coronavirus measures are intended to tank Donald Trump’s reelection, which they attributed to Rep. Alexandria Ocasio Cortez (D-NY).

They also claim that wearing the masks that health professionals and construction workers use daily will cause “high levels of Carbon Dioxide-CO2 According to SCIENCE AIRTHINGS,” which will result in “low productivity.”

But toward the bottom, the owners managed to work in an attack on both the media and LGBTQ people.

“There are people who got covid19 and not all the others living in the same house got it,” they wrote. “This proves that covid19 IS NOT AS CONTAGIOUS AS THE NEWS MEDIA AND MANY OTHERS HAVE BLOWN IT UP TO BE. A lot of these same people support LGBTQ. This lifestyle is sin in God’s eyes and spreads deadly diseases and sicknesses.”

After the community erupted in outrage, the sign was removed and employees started to wear masks.

“I hope they did it for the right reasons,” JanAnn Todd told the Daily Item. “I’m glad they took down the horrible sign and I’m hoping they apologize for the comment about the LGBTQ community.”

Several groups came together over the weekend to protest while cars flying Confederate flags circled the rally and revved engines and honked horns to try to drown out the speakers. Activists gathered on a single street in the town, spaced out at street corners over several blocks.

They wore T-shirts in matching colors at each corner, forming a rainbow pride flag of protesters that stretched through the town.

“I am a gay man in central Pennsylvania who grew up here, around here,” Trevor Leon told FOX 56. “It’s hard.”

“Some little gay kid growing up here in central Pennsylvania is going to see this and see all the support and hopefully it helps.”