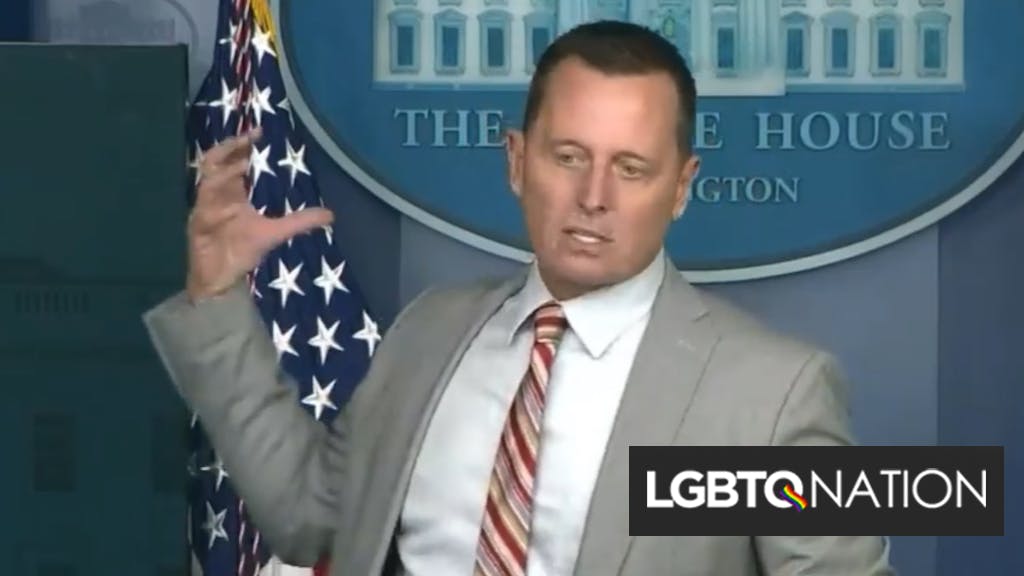 Out former Trump administration official Richard Grenell had some stern words for journalists who tried to ask him about his failed global initiative to decriminalize homosexuality.

Grenell served as U.S. Ambassador to Germany and then as acting director of national intelligence for a couple of months under Donald Trump. He is currently working for an anti-LGBTQ Christian conservative organization and helping the Republican party with LGBTQ outreach.

Related: Trump tweets it’s his “great honor” to be the “most pro-gay president in American history”

Grenell appeared at a press conference on Friday that announced a new Serbia-Kosovo agreement and a journalist with the New York Post asked him about the global initiative to decriminalize homosexuality that he announced in early 2019.

Grenell, though, didn’t want to hear about the decriminalization initiative.

“I’m going to just talk about Kosovo and Serbia,” he snapped at the journalist, the Washington Blade reports. “I don’t know if you can find it on a map, but this is atrocious. I have to tell you guys. You might be too young to understand what this issue is about. Maybe the older journalists should step and say, ‘This is a big deal. This is a big issue.’”

“I’m astounded at what happens in Washington, D.C., especially in this room. I got to tell you: get substantive. Maybe it’s too complicated of an issue for you all,” Grenell said, oddly implying that his own decriminalization initiative isn’t a substantive issue.

An NBC journalist tried to point out that “this is the first time we’ve had the opportunity to speak with these individuals” about the initiative, possibly referring to the recent Daily Beast report where LGBTQ activists said it hasn’t had any successes – no countries have legalized homosexuality as a result of the initiative – or even allotted funds to local activists or global LGBTQ organizations.

The initiative has been cited repeatedly by Republicans – including by Grenell himself – as one of the only reasons for LGBTQ people to vote for Trump, even though they refuse to explain exactly what the initiative has accomplished.

“OK, but today’s on Kosovo and Serbia,” he said. “Let’s take a little time and talk about this 21-year issue.”

Grenell went on to say that “people aren’t listening to you anymore” and that there’s “a crisis in journalism” as he refused to talk about his own decriminalization initiative.

“I don’t think any of us came here for a lecture about our questioning,” said a third journalist, this one from Reuters.

“I didn’t come here to talk about anything other than Kosovo and Serbia,” Grenell pouted.

Oddly, the decriminalization initiative was mentioned in the Serbia-Kosovo agreement, according to images of it posted to Twitter on Friday.