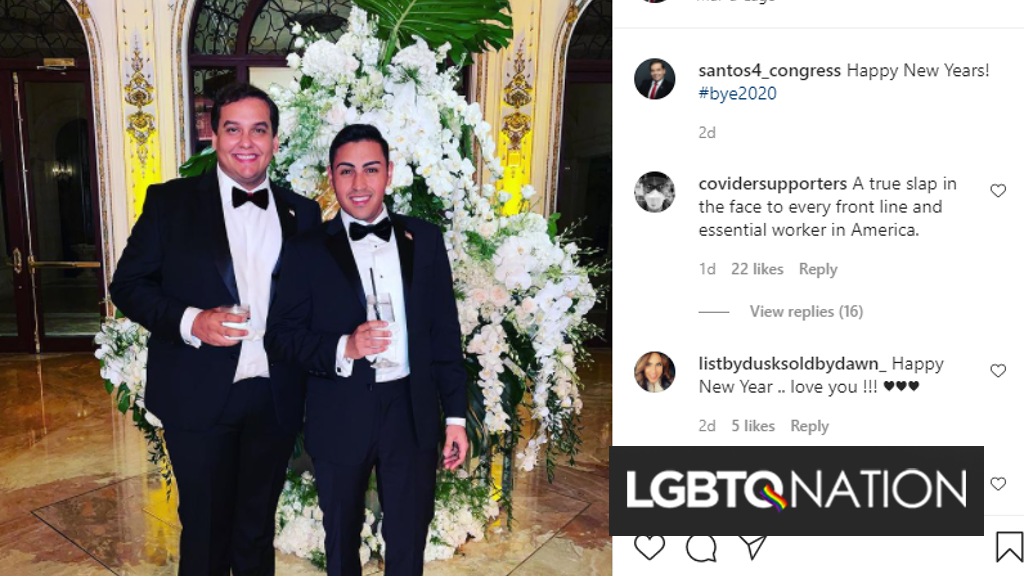 Out gay Trump-supporter George Santos has expressed his dismay at a report that led to the termination of his fiancé. He claims he had to flee his home because it was revealed that Santos and his fiancé attended a mask-less New Year’s Eve event at Mar-A-Lago.

The report relied on Santos’ own social media posts as a citation.

Related: Watch a boat of gay protocol-skirting partygoers sink into the ocean “like the Titanic”

“My fiancé & I had to leave our home this evening with our 4 dogs thanks to the @nytimes publishing of my Instagram showing me attending the #MarALago New Year’s Eve party,” Santos wrote on Twitter.

“My fiancé a pharmacist who worked [12 hour, 7 days] of shifts for 9 months was fired! The violence against us is real.”

My fiancé & I had to leave our home this evening with our 4 dogs thanks to the @nytimes publishing of my Instagram showing me attending the #MarALago New Year’s Eve party. My fiancé a pharmacist who worked 12h/7days shifts for 9 months was fired! The violence against us is real.

Santos further blamed the New York Times on Instagram for his and his unnamed fiancé’s newfound problems. “@Nytimes you have exposed my family to danger,” he wrote in a caption for a screenshot of his tweet, “…and have striped [sic] one of us of our livelihood! This is unAmerican [sic].”

The Mar-A-Lago New Year’s Eve party is a tradition that the Trump family started prior to becoming President. The event was not cancelled this year, even in light of the ongoing coronavirus pandemic. With more than 500 scheduled to attend, critics believed it was going to be a “superspreader” event — such as the ones that infected several in Republican Party, possibly including the President.

The report that Santos refers to, “Without Trump, or Masks, Mar-a-Lago Partied On,” was published online by the Times on New Year’s Day. The paper (among other outlets) scoured the social media posts of several attendees, and contacted some anonymously, and found that virtually zero guests wore masks throughout the gala.

Santos nor his fiancé were identified in the report by name, but Santos’ Instagram post was used as a source for the report’s description of the event’s menu.

At the event, Santos and his fiancé were all smiles. They posed for pictures with prominent “Trump World” figures like Rudy Giuliani and impressed billionaire heiress Andrea Catsimatidis, who chairs the Manhattan Republican Party.

Guests were charged approximately $1,000 to attend. The Trump children, Rep. Matt Gaetz, Vanilla Ice and MyPillow CEO Mike Lindell were among those in attendance.

The President and First Lady, however, chose at the last moment not to show.

“It was unclear why Mr. Trump flew back to Washington,” the Times reported, although the Daily Mail believes he was “forced” to return to the White House to work on COVID-19 relief. Instead, President Trump tweeted into the new year, sharing videos from One America News Network (OANN) and election-related conspiracies through the night and early morning.

In November, Santos lost his election for a seat in Congress representing the 3rd District of New York state. If he had been elected, Santos would have been the first out LGBTQ Republican ever elected to the U.S. House of Representatives.

“I think that this president has done more for the community than his predecessors,” Santos claimed in October. He was one of only two out candidates in the GOP to receive an endorsement from the Log Cabin Republicans, who endorsed several anti-LGBTQ politicians alongside him.

Santos presented himself as a far-right choice with a platform that included ending bail reform, increased funding for the police, less gun control, partial privatization of Social Security, and building a wall between Mexico and the U.S. His website says he supports marriage equality.

LGBTQ equality or protections against discrimination weren’t mentioned when he shared his platform on Ballotpedia, but preventing “churches and synagogues from ever being mandated upon by the government” was.

Santos claimed that he had been the victim of voter fraud and called on the “FBI,CIA,DOJ” to intervene on his behalf to stop “ILLEGAL VOTES.” Eventually, though, he conceded. He has already refiled to run again in 2022.

Early in 2020, during his campaign, Santos contracted COVID-19. He later told the Island Now that he “had probably the worst two weeks of my life as an adult.” Noting that he stayed with his fiance while quarantining, Santos added that “nobody would come near me thinking I was still viral.”

“That said, I survived coronavirus,” he boasted.

Santos did not clarify why he had to immediately vacate his home, why the Times was responsible for it, or what violence he faced as a result. The Times has not issued a response.

The Twitter world, however, was not merciful in response to Santos’ claims. Some replies assumed his fiancé was a woman, with one tweet saying “she deserves to be fired” for attending the gala.

So, your fiancé serves an at-risk population but was maskless at a public event?

She deserved to be fired.

How does someone hate himself and his future husband THAT MUCH

Further criticisms of Santos’ actions were equally not as kind, even from other LGBTQ people. Journalist and Senior Advisor at the Justice Collaborative, Chris Geidner, replied on Twitter: “Wait, do I have this right?

“You’re a guy running for Congress, and you’re upset that the paper that covers your district is … covering your campaign-oriented Instagram account?”

Dude you just admitted your fiancée was maskless at an event and is in the medical profession, really don’t feel sorry for you at all putting lives at risk, dipshit

Our numbers are skyrocketing and you flew to Florida to attend a mask-less party. I’m only sorry you came back. Thanks for the heads-up. Will happily campaign against you

Isn’t he with the “party of personal responsibility?”

You published it! You put it on your Instagram. Seems like the blame is squarely on your shoulders. Don’t want to deal with the consequences of your actions? Then don’t put them on display for the world to see.

Wait, do I have this right? You’re a guy running for Congress, and you’re upset that the paper that covers your district is … covering your campaign-oriented Instagram account?