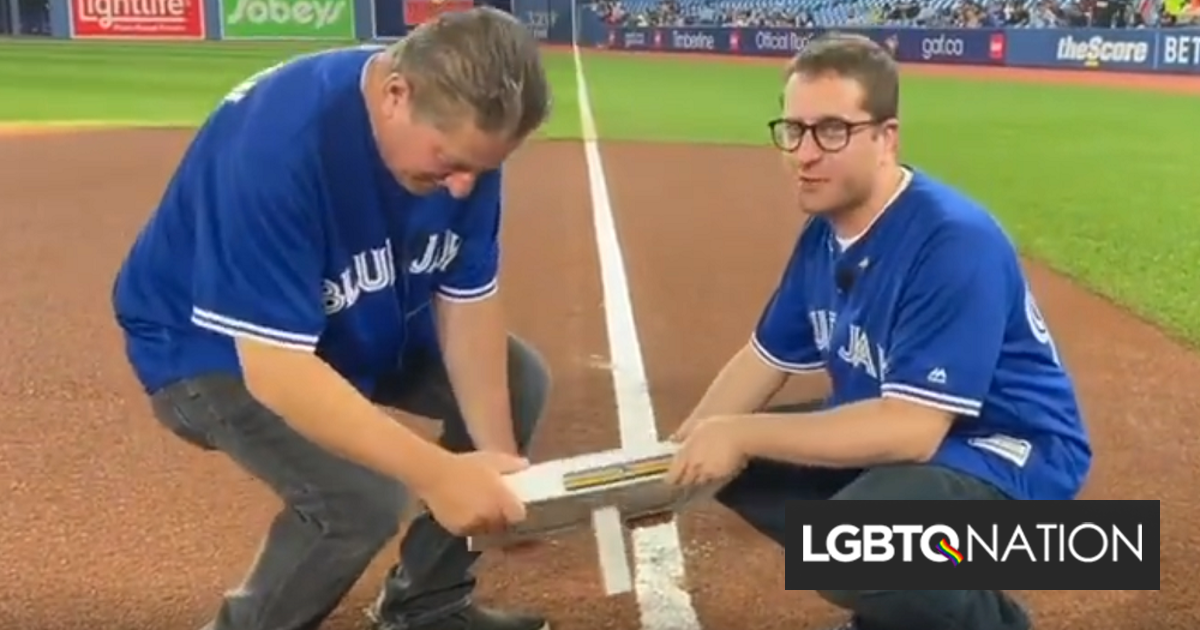 Sherman, better known as “Damnit Maurie” to his listeners, posted his appreciation for the team’s invite on Instagram.

Related: Baseball players remove Pride logos from uniforms because “we believe in Jesus”

“Such an incredible & memorable experience with my dad! Was invited by the @bluejays to have the honour of installing the #Pride bases ahead of this weekends #PrideNight game!” he wrote.

In the video included in the Instagram post, Sherman and his father walk out on the field to place the bases. As they walk out, the announcer is heard speaking, “Happy Pride Blue Jays fans! …If you turn your attention to first base, we’re excited to be joined by Damnit Maurie, of The Roz & Mocha Show and his proud dad Frank J. Sherman. They have the very special honor of installing the pride bases tonight. What a special moment.”

After some complications putting the base on first, the pair get the base in place.

“I’m glad we’re able to do this together,” Frank says. “This is really something special.”

Choking back tears, Sherman tells his father, “I just want to say that you’re one of the greatest dads ever to do something like this with me.”

“I’m so lucky to have a dad like Frank,” Sherman said. “Having the chance to witness one of my dad’s dreams of being on the home field at Rogers Center where the Blue Jays play was made just that much more special when the incredible team at the Blue Jays invited my dad and me to be one of the first-ever people (outside of the official MLB grounds crew) to have the honors of installing the Pride bases ahead of Pride night, which was just an absolute emotional moment.”

He added that he was “such a mess” while it was happening.

“It hit me like a heavy storm but soon a rainbow appeared when I realized the incredible moment I was in the middle of — I got to witness my dad’s wish come true of stepping out onto the field of his beloved Blue Jays, but together we proudly planted the pride flag onto the field of an MLB game,” Sherman said. “‘This is something really special and I’m happy to do this with you’ is what my proud dad said, and I will forever treasure [that moment].”

Last year, Sherman wrote in an op-ed in The Advocate how at first his dad wasn’t very supportive when he came out.

“I think the reasons for that that fell under lack of knowledge at the time. But he’s grown over the years to be the most loving and supportive dad, and even better, he’s obsessed with my husband. He’s become the best father-in-law around,” he wrote at the time.

His father also put up a Pride flag in his backyard, asking Sherman to help him hoist it up.

“For him to not just accept that he has a gay, married son but also to want to wave the flag proudly in support is a big deal. Unconditional love and support is the biggest gift a 2SLBGTQ+ person could ask for,” Sherman shared.