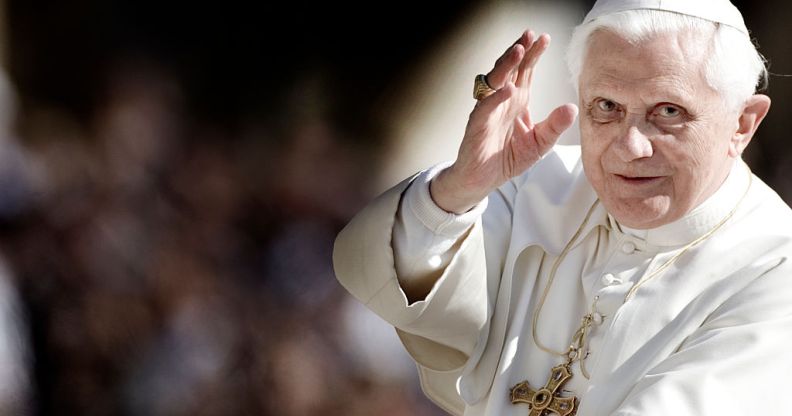 Pope Benedict XVI was head of the Catholic Church from 19 April 2005 until his resignation on 28 February 2013. (Corbis via Getty Images/Alessandra Benedetti)

Benedict died on Saturday (31 December), aged 95. He had resigned almost a decade earlier, becoming the first pope to resign in 600 years.

A day before his burial on Thursday (5 January), Irish priest Bernárd Lynch published a letter via We Are Church Ireland, where he said Benedict had a “hostility” to LGBTQ+ people and “most significantly to those living and dying with HIV/AIDS”.

“I saw the devastating consequences of his teachings.”

Lynch, who is known for his work with the LGBTQ+ community and people living with HIV/AIDS, said Benedict, at the height of the AIDS pandemic in the 1980s, “forced our communities out of Catholic Church property all over the world”.

“He labelled us disordered in our nature and evil in our love,” Lynch said of a letter Benedict wrote in October 1986 when he was known as Cardinal Ratzinger.

That letter was “misleadingly titled” The Pastoral Care of Homosexual Persons, and was published with the blessing of then-pope John Paul II, Lynch said.

He said the letter led to people with HIV being “blamed by the church for their disease” and as a result “many ‘good Catholics’ took their own lives”.

Those advocating for legal work and housing protection for people living with HIV/AIDS were told their efforts “would be met with violence”, he said.

Lynch said it ultimately led to violent attacks and also came as justification for Christian families that were rejecting their “dying gay sons”.

The church’s strict policy against condoms “caused untold numbers of deaths and vast needless suffering” too, he said.

“After what I can only call the soul murder of so many sisters and brothers, I pray Benedict rests in the arms of our loving and forgiving God.”

In the letter, he also briefly condemned Benedict for “his irresponsible way of dealing with the sexual abuse crisis ravaging the church”, among other issues.

This is not the first time Lynch has spoken out against Benedict.

In September 2010, Benedict, as pope, visited the UK. Lynch was one of a number of speakers at a protest at Hyde Park Corner, in London, against the state funding of the trip, as well as Benedict’s teachings on homosexuality, abortion and contraception.

Lynch was the first ever Catholic priest to enter a civil partnership and eventually went on to marry his long-term partner in 2017.