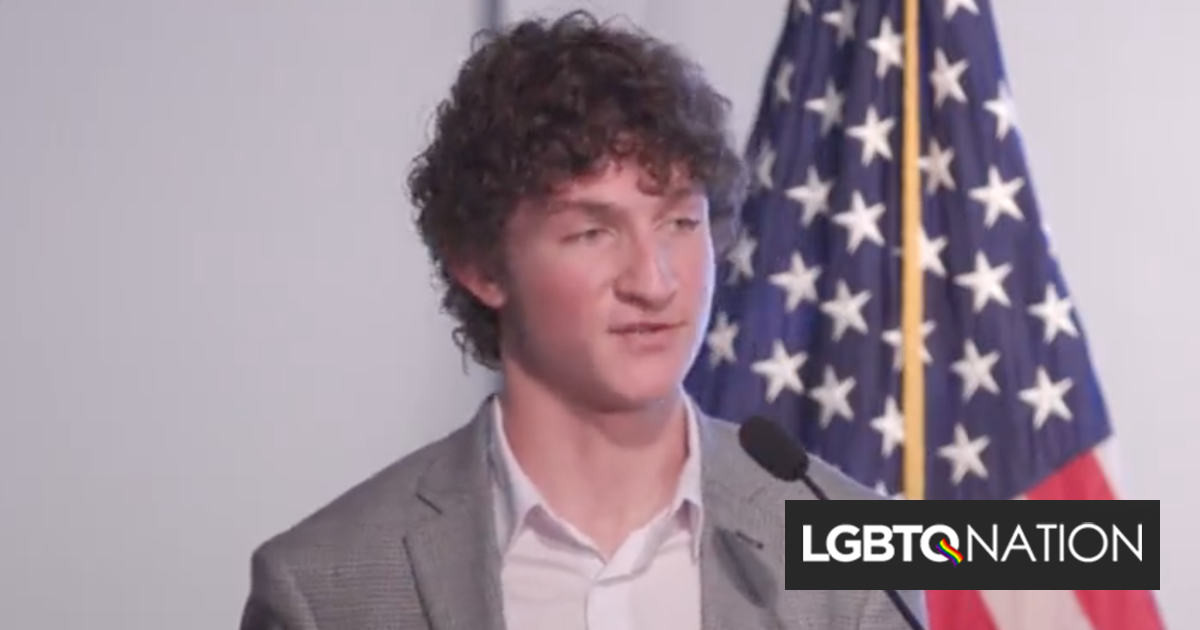 Zander Moricz, an out, graduated senior from Pine View School in Osprey, Florida got a measure of redemption last week when he delivered his banned valedictorian speech in Washington, D.C. at the invitation of the US Secretary of Education.

“Zander Moricz wasn’t allowed to deliver the original valedictorian speech he wrote for his Florida high school graduation because it included references to his LGBTQI+ activism,” Education Secretary Miguel Cardona tweeted Friday. “So, I invited him to deliver it at the U.S. Dept. of Education. When students speak, we must listen.”

Zander Moricz wasn’t allowed to deliver the original valedictorian speech he wrote for his Florida high school graduation because it included references to his LGBTQI+ activism. So, I invited him to deliver it at the U.S. Dept. of Education. When students speak, we must listen. pic.twitter.com/eXrof3naPi

In May, Moricz was informed by school principal Stephen Covert that any mention of LGBTQ issues, advocacy or his sexual orientation in the speech to graduating seniors would result in his microphone being silenced.

Earlier in the year, Moricz organized an all-school walkout in protest of the Florida’s Don’t Say Gay law, the new state law that bans discussions of sexual orientation and gender identity in younger grades and restricts them in older grades.

“It was like a sledgehammer to the face,” Moricz said at the time he was censored. “I could not comprehend it because it felt so backwards.”

“I am the first openly-gay Class President in my school’s history — this censorship seems to show that they want me to be the last,” Moritz tweeted.

Rather than omit the banned subject matter, Moricz resorted to metaphor in a revised version of the valedictory in May.

“I used to hate my curls. I spent mornings and nights embarrassed of them, trying desperately to straighten this part of who I am—but the daily damage of trying to fix myself became too much to endure.”

“So while having curly hair in Florida is difficult — due to the humidity — I decided to be proud of who I was and started coming to school as my authentic self.”

On Friday in Washington, Moricz counseled empathy and understanding in the original version of his remarks:

“In my positions I am asked what can be done to help the children in Florida. The answer: listen. Listen to the students and respect what they say enough to act on it. Respect our warnings enough to mobilize around them, and respect our pleas enough to vote upon them.”

It is the young people of FL and our country that inspire me. None more so than @zandermoricz.

He gained national attention when he spoke out against FL’s hateful “Don’t Say Gay” bill at his high-school graduation.

Thank you, Zander. You will always have an ally & friend in me. pic.twitter.com/M71YXA3UlG

Florida Gov. Ron DeSantis (R) signed the Parental Rights in Education law in March. Secretary Cardona has been a vocal critic of the law, which went into effect July 1.

Moricz is one of the several plaintiffs in a lawsuit challenging the state’s anti-LGBTQ law.

In addition to Moricz’s censorship, the law’s effects are already being felt around the state.

A sixth-grade Orlando science teacher resigned in the spring after parents complained about his acknowledging his same-sex marriage at school. A Cape Coral middle school art teacher was fired after revealing her sexual orientation to students. Another teacher was forced to take down their rainbow “COEXIST” flag, one that they had flown for years, after the “Don’t Say Gay” law passed.

Jack Petocz, a 17-year-old senior in Palm Coast, was forbidden from running for class president because he organized a massive student walkout in protest of the law, just as Moricz did.

Moricz matriculated to Harvard University, where he plans on studying human rights law.